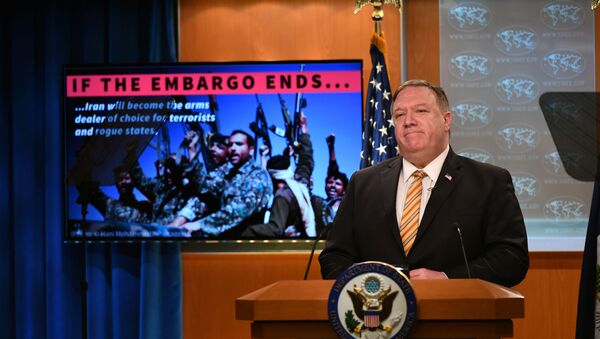 US Secretary of State Mike Pompeo earlier denounced Beijing for "decreeing an end to freedom in Hong Kong", warning that the United States will treat Hong Kong as "just another piece of mainland China", since the Chinese Communist Party appears to treat the region in the same way.

Mike Pompeo tweeted that the United States will end its export of defence equipment and "sensitive US Commerce Department-controlled dual-use technologies" to Hong Kong, adding that "if Beijing now treats Hong Kong as "One Country, One System, so must we".

Today, the United States is ending exports of @StateDeptPM controlled U.S. origin defense equipment and sensitive @CommerceGov controlled dual-use technologies to Hong Kong. If Beijing now treats Hong Kong as “One Country, One System,” so must we.

In his statement, Pompeo claimed that the action was taken to "protect US national security".

"The United States is forced to take this action to protect US national security. We can no longer distinguish between the export of controlled items to Hong Kong or to mainland China. We cannot risk these items falling into the hands of the People’s Liberation Army, whose primary purpose is to uphold the dictatorship of the CCP by any means necessary", the statement said.

​Pompeo added that additional measures by the Trump administration against Hong Kong will "reflect the reality on the ground in Hong Kong".

The announcement came after Pompeo warned that Washington would "move away" from agreements that the US has with Hong Kong that are "different from those we have with Beijing". Pompeo has repeatedly insisted that the US will treat Hong Kong in the same way that it treats mainland China, referring to the Chinese Communist Party.

"President Trump has made very, very clear to the extent that the Chinese Communist Party treats Hong Kong as it does Shenzhen and Shanghai, we will treat them the same. We have many agreements that are unique between the United States and Hong Kong, separate and different from those we have with Beijing. We will move away from every one of those", Pompeo said at a virtual conference at the 2020 Copenhagen Democracy Summit.

In a follow-up statement, US Secretary of Commerce Wilbur Ross announced the suspension of "regulations affording preferential treatment to Hong Kong over China".

"Commerce Department regulations affording preferential treatment to Hong Kong over China, including the availability of export license exceptions, are suspended. Further actions to eliminate differential treatment are also being evaluated. We urge Beijing to immediately reverse course and fulfill the promises it has made to the people of Hong Kong and the world", the statement read.

Under the 1992 United States-Hong Kong Policy Act, the region enjoys a special status as a customs territory separate from mainland China. This act allowed Hong Kong to have its own export control system and made it a territory where the US tariffs on Chinese goods did not apply.

Another spike in tensions between the US and China came after Beijing introduced new legislation for Hong Kong envisaging imprisonment and penalties for subversive activity and attempts to undermine state authority. The new law was met by waves of protests and condemnation from the United States.

Denouncing the US measures, Beijing has repeatedly said that the use of Hong Kong is a part of China's internal affairs and must not be interfered with.