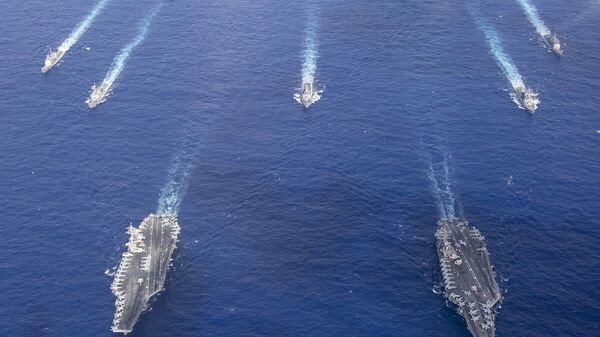 © Seaman Dylan Lavin
Subscribe
For the second time in as many weeks, the US Navy has partnered two of its aircraft carriers for joint drills off the Chinese coast. The muscle-flexing comes after the Association of Southeast Asian Nations (ASEAN) issued a stern rebuke to Beijing for its South China Sea claims.

Last week, the US Navy aircraft carriers USS Theodore Roosevelt and USS Nimitz sailed together in the Philippine Sea, but this week the Nimitz has been joined by the USS Ronald Reagan.

The move comes shortly after a slew of US intelligence and patrol aircraft were spotted traversing the South China Sea and Phillippine Sea, and just days after ASEAN sharply criticized Beijing for its claims to historic right to 90% of the hydrocarbon-rich South China Sea. 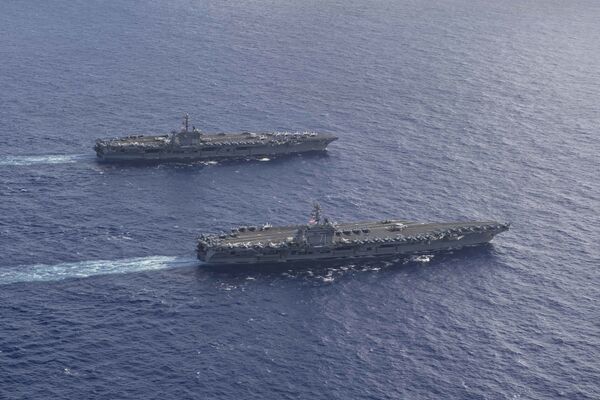 During a tele-summit hosted by ASEAN chair country Vietnam on Saturday, the international group issued a statement reaffirming the 1982 United Nations Convention on the Law of the Sea (UNCLOS), which lays out the basis by which nations can define their exclusive economic zones, which govern the special rights nations have to natural resources located there.

US Secretary of State Mike Pompeo expressed his support for the resolution, writing on Twitter on Saturday that “China cannot be allowed to treat the SCS [South China Sea] as its maritime empire.”

However, ASEAN’s statement placed “further stress on the importance of non-militarization and self-restraint in the conduct of activities that would complicate or escalate disputes and affect peace and stability, and avoid actions that may further complicate the situation. Pursue the peaceful resolution of disputes in accordance with universally recognized principles of international law, including the 1982 UNCLOS, while enhancing mutual trust and confidence” - hardly an endorsement of massive naval drills.

Washington has carefully positioned itself as the enforcer of freedom of the seas, regularly performing what it calls “freedom of navigation operations” (FONOPs) through the South China Sea, Taiwan Strait and other contested waterways. Accordingly, the Navy’s news release branded the drills as advancing the “international rules-based order.”

US Offers Military Confrontation as Solution

“Only the US Navy can integrate a carrier strike force on this scale and consistently project power to protect freedom of the seas,” Rear Admiral James Kirk, commander of the carrier strike group led by the Nimitz, said in the Navy’s June 28 news release. “With more than 10,000 US Navy Sailors from across the world working together as one cohesive team, these operations are what keep us ready to respond to any contingency.”

Pentagon thinkers have identified the South China Sea as one of the “potential flashpoints” in what it sees as a new Cold War-type long-term strategic confrontation with China.

Washington has long sought to pry Southeast Asia away from Chinese influence with both carrot and stick. However, the ongoing US-China trade war has helped drive more of these developing nations toward Beijing, especially as they sign new deals to participate in the Belt and Road Initiative infrastructure megaproject. 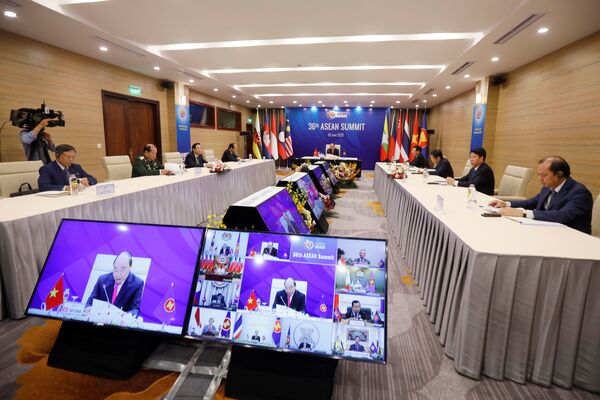 "ASEAN countries are increasingly worried that the great power rivalry we're seeing will lead to the formation of rival blocs that will force them to choose sides, either with China or the United States, and leaders in southeast Asia have been increasingly frank and candid about this," Asia Times reporter Nile Bowie told Sputnik after the November 2018 ASEAN summit.

“These countries don't want to join any antagonistic alliance, and yet we see Washington is ramping up pressure on them to stand up to China or get out of the way, effectively.”

“[P]eace in the Indo-Pacific is made possible by the willingness of the free nations to work together and US combat power postured in the region,” Pacific Air Forces Commander (PACAF) General Charles Brown Jr. said during a June 24 briefing hosted by the US State Department.

“I’m concerned by increasing opportunistic activity by the PRC [People’s Republic of China] to coerce its neighbors and press its unlawful maritime claims while the region and the world is focused on addressing the COVID pandemic,” Brown said.

China’s claims to the South China Sea rest on historic precedent, but conflict with the claims of five other nations, four of which are part of ASEAN. In addition to China and Taiwan, the nations of Malaysia, the Philippines, Vietnam and Brunei have made claims overlapping with China’s, which are roughly expressed by the ill-defined Nine-Dash Line. 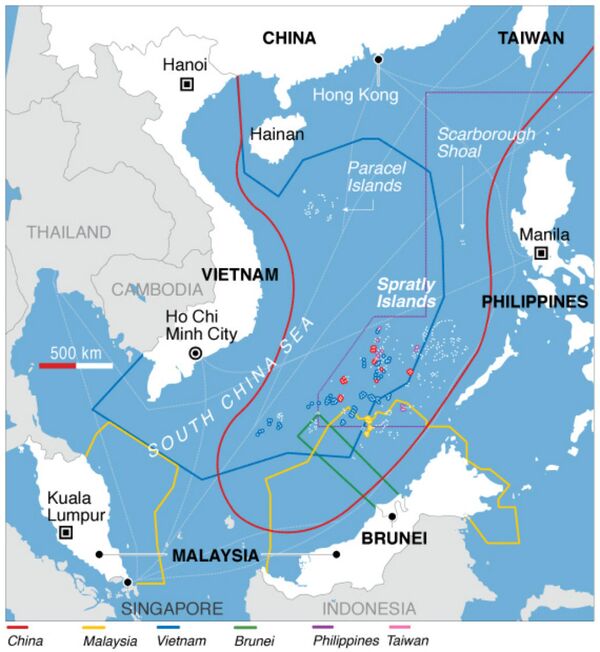 At stake is control over potentially enormous hydrocarbon reserves beneath the seafloor, including natural gas and petroleum, as well as control over a waterway that handles in excess of $3 trillion in trade per year.

Ahead of the ASEAN summit, Filipino National Defense Secretary Delfin Lorenzana blasted Beijing over rumored plans to institute an Air Defense Identification Zone (ADIZ) over the Spratly, Paracel and Pratas island chains in the South China Sea, saying it would “arrogate unto itself a vast sea considered to be a global commons that has been opened for millennia to all for navigation and fishing,” the Manila Standard reported.

Longstanding rumors about Beijing’s plans to exert control over South China Sea airspace were given new life in May after Taiwan’s Ministry of National Defense claimed to have knowledge of Beijing’s intentions, and the South China Morning Post published a report making the same claim, but citing a People’s Liberation Army insider.

The reports point to the proliferation of both fixed and mobile radar platforms deployed across the region by Beijing, as well as increased flights by airborne warning and control aircraft such as the KJ-500, which sports a large radome on top.