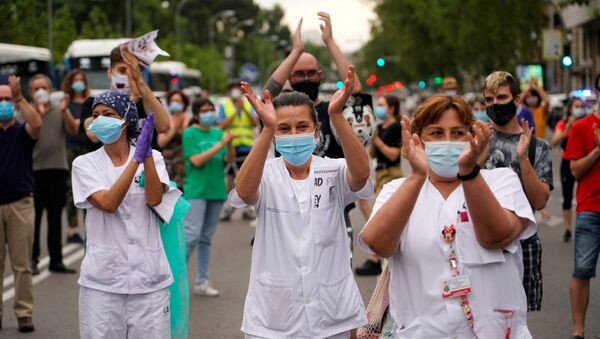 MOSCOW (Sputnik) - Sputnik and RT’s French-, German-, and Spanish-language coverage of the COVID-19 outbreak, along with reports in these languages produced by Chinese, Iranian, and Turkish state media outlets, can receive as much online engagement as prominent European news sources, researchers at the University of Oxford said in a Monday report.

"State-backed outlets producing coronavirus-related content in French, German and Spanish can achieve higher average engagement per article than prominent news sources such as Le Monde, Der Spiegel and El Pais," the researchers said in the report.

The study, which was conducted over a three-week period, also found that these news outlets can reach tens of millions of people, despite having smaller distribution networks.

"Most of the state-backed outlets from China, Iran, Russia and Turkey generating content in French, German, and Spanish reaches tens of millions of social media users around the world, though through smaller distribution networks than the major news outlets operating in those languages," the researchers said.

In an earlier study, the Oxford researchers found that Russian, Chinese, Iranian, and Turkish state-run media outlets can get up to ten times the median engagement per article than the UK’s BBC state-run broadcaster.

On June 15, the Russian deputy minister of digital development, communications, and mass media Alexey Volin said that RT and the Russian news conglomeration Rossiya Segodnya, which includes the Sputnik and RIA Novosti agencies, are innovators in connecting with online audiences.