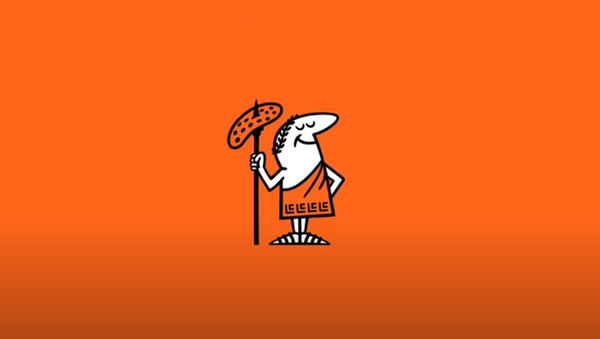 © YouTube/dan wool
Subscribe
The corporate office of US pizza chain Little Caesars has issued a statement saying it has “zero tolerance for racism and discrimination in any form” and fired the employees responsible for serving customers pizza with pepperoni arranged in the shape of a reversed swastika.

Ohio resident Misty Laska took to social media on Sunday to express her displeasure with the “saddening and disturbing” actions of employees at a Brook Park, Ohio, Little Caesars who chose to form a reversed swastika out of pepperonis on a pizza.

So my husband stopped at #LittleCaesars for a quick bite, husband brings this home! I’m truly disappointed. This is truly saddening and disturbing and not funny at all! These aren’t funny jokes and shouldn’t be made period and on company time?! 🤯🤯🤯🤯✊🏻✊🏿✊🏾✊🏽 pic.twitter.com/zQaXecN2se

"I walked in, I said, 'What do you guys have left?' And they said, pepperoni and cheese. I said, give me the pepperoni," said Jason Laska, Misty’s husband, as reported by CNN.

However, they did not check the pizza until they arrived at home.

"I look at it like with my head back and I'm like, 'Oh my God,'" Misty recounted.

"These are the kinds of things that are continuing to fuel the hate and the confusion that exists in the country and in the world," Jason asserted.

He went on to say that the corporate office of Little Caesars, as well as the franchise owner, called to apologize.

“We have zero tolerance for racism and discrimination in any form, and these franchise store employees were immediately terminated. We’re deeply disappointed that this happened, as this conduct is completely against our values,” Little Caesar Enterprises said in a statement obtained by Fox 23 News.

"What repercussions are they getting from that? Just termination when they can just go right down the street and find another job," Misty said, CNN reported.

Despite the company’s denouncement of the racism and discrimination, some netizens pointed out that the symbol on the pizza was actually a reversed version of the Nazi swastika, which has been used in Buddhism to signify the Buddha’s footprints and heart.

It's a swastika, drawn backwards by racist dimwits who don't know the difference.

Nevertheless, the two employees involved in the incident have been terminated from the Brook Park pizza franchise.

000000
Popular comments
since the writing on the box is not mirrored, the direction of the symbol on the photo is the same as the real direction on the pizza. but than this is not the nazi symbol, but the hindu/budhist symbol for divinity and spirituality. that means that the aim was good, and the employees should had not been terminated
tmon
30 June 2020, 02:28 GMT5
000000
Does this mean the restaurant should now be looted and burned down?
4Justice
30 June 2020, 02:45 GMT
000000
Newsfeed
0
New firstOld first
loader
LIVE
Заголовок открываемого материала
Access to the chat has been blocked for violating the rules . You will be able to participate again through:∞. If you do not agree with the blocking, please use the feedback form
The discussion is closed. You can participate in the discussion within 24 hours after the publication of the article.
To participate in the discussion
log in or register
loader
Chats
Заголовок открываемого материала
Worldwide
InternationalEnglishEnglishMundoEspañolSpanish
Europe
DeutschlandDeutschGermanFranceFrançaisFrenchΕλλάδαΕλληνικάGreekItaliaItalianoItalianČeská republikaČeštinaCzechPolskaPolskiPolishСрбиjаСрпскиSerbianLatvijaLatviešuLatvianLietuvaLietuviųLithuanianMoldovaMoldoveneascăMoldavianБеларусьБеларускiBelarusian
Transcaucasia
ԱրմենիաՀայերենArmenianАҧсныАҧсышәалаAbkhazХуссар ИрыстонИронауОssetianსაქართველოქართულიGeorgianAzərbaycanАzərbaycancaAzerbaijani
Middle East
Sputnik عربيArabicArabicTürkiyeTürkçeTurkishSputnik ایرانPersianPersianSputnik افغانستانDariDari
Central Asia
ҚазақстанҚазақ тіліKazakhКыргызстанКыргызчаKyrgyzOʻzbekistonЎзбекчаUzbekТоҷикистонТоҷикӣTajik
East & Southeast Asia
Việt NamTiếng ViệtVietnamese日本日本語Japanese中国中文Chinese
South America
BrasilPortuguêsPortuguese
NewsfeedBreaking
17:30 GMTUS Judge Rules Against Coronavirus Vaccine Mandate for Federal Contractors
17:17 GMTIOC Executive Board Holds Press Conference Amid US Diplomatic Boycott of Beijing Olympics
16:51 GMTIsraeli Prime Minister Claims Country Is 'Fighting Off Forces of Evil' Every Day
16:51 GMTApple CEO Reportedly Lobbied Chinese Officials to Get Preferential Treatment in Country
16:44 GMT'F**k You': Rittenhouse Hits Back at LeBron James After Basketball Star Doubts Tears in Court
16:38 GMTCan It: Elon Musk Rips Joe Biden’s Build Back Better Bill, Calls on Senate to Not Pass It
16:31 GMTUS Would Urge Germany to Halt Nord Stream 2 Pipeline if Russia Invades Ukraine, Reports Say
16:16 GMTMan Kills Family, Himself Over Fake Vaccine Certificate in Germany, Reports Say
15:42 GMTDrug Sniffer Dog Van Spotted Outside Parliament After Cocaine Use Reported to Cops
15:31 GMTCalifornia Port Congestion Slowly Shrinking, But Still Risks Christmas Goods Delays
15:28 GMTRose McGowan’s Lawsuit Against Weinstein Dismissed After She Fails to File Paperwork by Deadline
15:27 GMTRussian President Putin and His US Counterpart Biden Hold Virtual Meeting
15:19 GMTUS Leaders Speak With Forked Tongue
15:18 GMTPence's Former Chief of Staff Reportedly Agrees to Cooperate With 6 January Committee
15:13 GMTFrench Police Arrest Suspect in Connection With Journalist Jamal Khashoggi's Murder, Media Claims
15:07 GMTIndian Government Denies Reports From China of Infiltration Attempts
15:06 GMTSchool Principal in India's Uttar Pradesh Accused of Molesting 17 Girls
15:01 GMTFrench Presidential Candidate Zemmour's Party Now Counts 20,000 Members, Report Says
14:49 GMTBiden Visits WWII Memorial to Honour Pearl Harbor Tragedy - Photo, Video
14:49 GMTLegal Expert: BoJo's Judicial Review Reform Boosts Arbitrary Concentration of Power in No 10's Hands