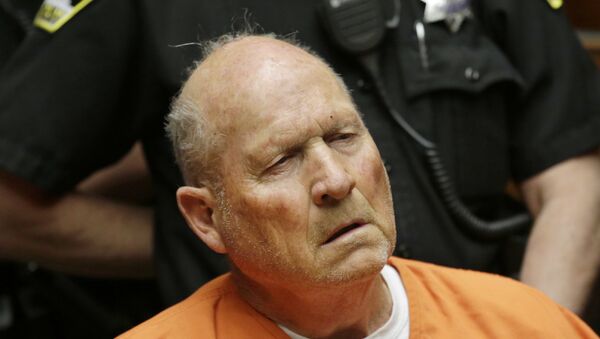 © AP Photo / Rich Pedroncelli
Subscribe
California has had its fair share of serial killers - the Night Stalker, the Hillside Strangler, Grim Sleeper and most famously the Zodiac Killer. On Monday a former police officer otherwise known as the Golden State Killer pleads guilty to a series of murders and rapes.

Joseph DeAngelo, now 74, has pleaded guilty on Monday, 29 June, to 13 charges of murder carried out in California over an 11 year period as part of a deal to avoid the death penalty.

DeAngelo offered his guilty pleas in a university campus ballroom rather than a courthouse, to comply with social distancing measures required because of the coronavirus pandemic.

He has also admitted to numerous rapes, burglaries and other crimes.

DeAngelo was brought into the courtroom in a wheelchair and wore an orange jail suit and a clear protective face shield. He scarcely spoke throughout the hearing, sticking to "yes" and "no" answers to Superior Court Judge Michael Bowman's questions

​The former cop is expected to be sentenced to life in prison in August at a second court hearing, where victims will have an opportunity to read statements.

Who is the Golden State Killer?

Between 1975 and 1986 a man dubbed the Golden State Killer raped and murdered victims in 10 California counties.

Watch DeAngelo act feeble while being confronted with examples of him acting feeble and crazy to get out of trouble. And hear how he admitted guilt when in custody (and hinted at an alter ego?) #GoldenStateKiller pic.twitter.com/M4tYcwmv3Z

​​His modus operandi was to break into the suburban homes at night, waking up couples at gunpoint and then tying up the man and piling dishes on his back.

He would rape the woman and threaten to kill both of them if he heard a single plate fall from her partner’s back.

​Bob Hardwick and his wife Gay were among a handful to survive.

Mrs Hardwick told CBS: "He certainly does deserve to die, in my view, so I am seeing that he is trading the death penalty for death in prison. It will be good to put the thing to rest. I think he will never serve the sentence that we have served - we’ve served the sentence for 42 years."

The Golden State Killer’s crimes stopped in the late 1980s but detectives kept returning to the cold case, knowing the killer had left DNA behind at the crime scene.

Law enforcement sources have scoffed at DeAngelo’s seemingly frail demeanor and use of a wheelchair, and family members of his victims agree. “Absolutely 100 percent, it’s an act what’s going on,” said Jen Carole, daughter of Lyman Smith and stepdaughter of Charlene Smith.

​One day in 2018 when they finally got their man - and he turned out to have been a former police officer, Joseph DeAngelo.

He was caught because one of DeAngelo’s relatives had uploaded their DNA onto GEDmatch, a popular US genealogy website, and an enterprising detective had decided to upload the killer’s DNA in the hope of getting a match.

DeAngelo was charged with 13 kidnappings and murders, 12 of which made him eligible for capital punishment because of aggravating factors, such as the rape of the victim.

DeAngelo - who was also known as the East Area Rapist, the Visalia Ransacker and the Original Night Stalker -has agreed a plea bargain with prosecutors. In return for them dropping the death penalty he will admit a number of crimes, thus sparing the victims the trauma of the trial process.

​The FBI has claimed DeAngelo was suspected of a total of 45 rapes and 120 burglaries in and around Sacramento, the San Francisco Bay area and southern California.

DeAngelo served with two small town police departments in the 1970s but was fired from Auburn Police Department in 1979 after shoplifting a hammer and a can of dog repellant.

DeAngelo only ever came to the attention of the police once - in 1996, when he was accused of driving off without pay for fuel. The Sacramento Bee newspaper discovered DeAngelo had actually sued for wrongful arrest, claiming the gas station’s pumps had malfunctioned, and won US$1 million in a lawsuit.

​On Sunday, 28 June, HBO premiered a new documentary series based on the best-selling book about the case, I'll Be Gone in the Dark.

The book was largely written by Michelle McNamara, who died in 2016 before DeAngelo was caught. It was completed by her comedian husband, Patton Oswalt, and published only months before the killer was finally unmasked.