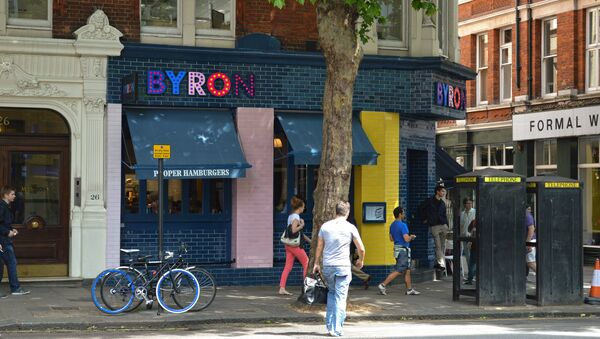 © Flickr / Gareth Milner
Subscribe
Restaurant and food chains are facing increased pressure amid the 3-month lockdown measures introduced by the government to slow the spread of the coronavirus pandemic. In response, the treasury has introduced certain measures to ensure that companies and workers are able to survive.

The fast-food chain Byron Burger informed its owners that it will go into receivership - a process known as 'administration' in the UK - as the impact of the coronavirus takes an increasing toll on restaurants in the UK, Sky News has reported.

According to anonymous sources speaking to Sky, Byron informed Three Hills Capital Partners, the private equity firm behind the chain, that it intends to formally appoint administrators for the bankruptcy process on Monday.

The company hopes to attract a bidder that could purchase parts of the business, including the brand name or around 51 restaurants, as part of a “pre-pack” administration.

According to Sky News, Byron is confident that an agreement can be reached within weeks. Accountancy firm KPMG sought to sell the chain in May, but received no bids.

Despite the potential sell-off, the company is reportedly looking to begin a partial reopening of branches in July as the United Kingdom begins to loosen its lockdown measures.

All 1,200 employees remain on minimum-hour payment terms to ensure that they are supported throughout the process.

Byron was founded in 2007 and suffered losses after expanding too quickly and agreeing to unaffordable rent deals. In 2013, the chain saw a surge in sales after former UK Chancellor George Osborne was seen eating one its burgers the night prior to the government announcing a comprehensive spending review.

Byron is just one of many food chains that have announced they are going administration or are warning of failure amid the coronavirus pandemic. Struggling firms have looked to the government for injections of public funds.

Restaurant chains have already received 12-month business rates holiday and VAT deferral. Others have been offered a grant scheme, depending on property value.