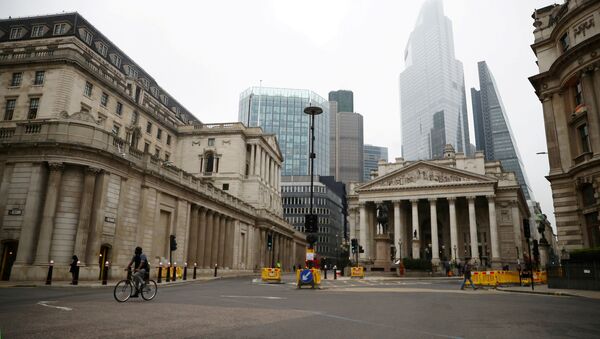 © REUTERS / Hannah Mckay
Subscribe
According to government data, the British economy shrank by an unprecedented 10.4 percent in the three months up to the end of April; that number included the nation’s biggest-ever monthly fall in GDP in April, weeks before the gradual reopening of the economy.

The United Kingdom has suffered a “big fall” due to the coronavirus pandemic, but will come out of the crisis, Prime Minister Boris Johnson said in an interview with Times Radio on Monday.

“We can’t just step back. What we will be doing in the next few months is doubling down on our initial agenda, which was all about investment”, Johnson said in his first interview broadcast since the start of the lockdown in mid-March.

Data by the Office for National Statistics shows that Britain’s GDP contracted by 10.4 percent in the three months to April, including a 20.4-percent fall in April, the largest decline since monthly records began. Analysts predict that the economy will shrink by a total of eight percent this year and is unlikely to recover until 2023.

Almost nine million workers — more than a quarter of the total workforce — have been furloughed, which has cost the government over $24.2 billion to date.

“This has been a disaster”, Johnson said of the pandemic, which has killed over 43,00 people in the UK. “Let's not mince our words, I mean this has been an absolute nightmare for the country and the country has gone through a profound shock”.

The prime minister, who fought for his life in an ICU after contracting the virus, said the government owed it to the victims to look at exactly “what went wrong and when”, but felt that this is not the right moment for an inquiry into the handling of the pandemic.

When asked how the government would cover the cost of mass investment, Johnson said there should be no return to “what people called austerity”, adding that it would be a “mistake”. Instead, he said, it was the time for a “Rooseveltian” approach to the economy.

Franklin Roosevelt is widely credited with ending the Great Depression through a massive government spending programme, which helped create jobs for workers and profits for businesses through a series of infrastructure projects.

Downing Street announced a massive rebuilding programme for English schools, with around $1.2 billion to be spent on upgrades and refurbishments over the next 10 years. On top of those funds, another $700 million will go towards school repairs this year.

Johnson also maintained that COVID-19 infection rates are slowly decreasing, while hospital admissions and the death toll are “much, much lower than a few weeks ago”.

“What we’ve got is the curve going in the direction roughly that they thought it would. It is very slowly coming down”, he noted, adding that it is important to empower local authorities to crack down on flare-ups properly.

Johnson's interview came hours after the resignation of Mark Sedwill, the UK’s most powerful civil servant. Sedwill resigned in the wake of reports of tensions with Johnson's chief adviser, Dominc Cummings, who is planning an overhaul of the government structure.

“He came in a very difficult time”, Johnson said of Sedwill. “He has seen the government through all sorts of very tough stuff”.

Johnson said that Britons were significantly fatter than people in most other European countries, admitting that he had lost some weight after contracting the coronavirus.

“Everybody knows that this is a tough [issue], but I think it's something we all need to address”, he added.

Johnson did some press-ups to prove that he was "as fit as a butcher's dog" in an interview with the Mail on Sunday newspaper.