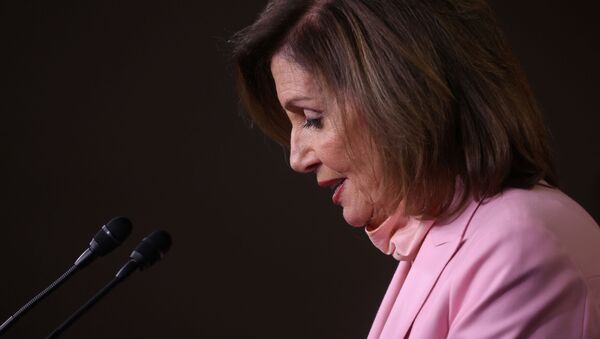 © REUTERS / Jonathan Ernst
Subscribe
Despite guidance from public health experts, mask-wearing has been a contentious issue in the US. Many politicians, including House Speaker Nancy Pelosi, have criticised President Donald Trump for his refusal to wear a mask in public and for not encouraging the nation to wear them.

House Speaker Nancy Pelosi said on Sunday that a federal mandate for all Americans to wear masks is “long overdue” as coronavirus cases in the US continue to surge.

“My understanding is that the Centers for Disease Control has recommended the use of masks but not required it because they don’t want to offend the president,” said Ms. Pelosi on ABC’s “This Week.”

President Donald Trump has repeatedly ignored public health advice by refusing to wear a mask as outbreaks have continued to worsen across several states.

At the time of publication, 128,315 people have died from coronavirus in the US and 2,622,155 have tested positive according to the Worldometer. On Friday, cases surged by more than 45,000 in one day in a record-breaking spike.

Despite the scientific advice that states that wearing a mask helps stop the spread of the virus, there is a lot of resistance towards wearing one in the US.

A number of local governments and public health experts have reiterated calls for the public to wear masks, since several states like Florida, Texas, California, and Arizona have seen a spike in cases this month. However, there has been no federal action for people to wear masks nationwide.

In a CBS interview, Vice President Mike Pence said people should listen to what state and local officials are saying about wearing masks in public.

Meanwhile, Arkansas Governor Asa Hutchinson, a Republican, said there should be a “consistent national message” to wear a mask.