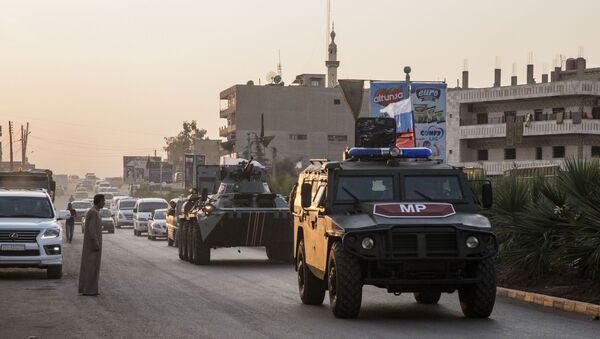 © AP Photo / Baderkhan Ahmad
Subscribe
Ekaterina Blinova
All materialsWrite to the author
US envoy James F. Jeffrey's remark that Washington is no longer seeking Assad's ouster should be taken with a grain of salt as regime change in Syria remains America's priority, argues international affairs and security analyst Mark Sleboda, explaining how US sanctions have accelerated the rapprochement between Syria, Russia, Iran, and China.

On Tuesday, Syrian Foreign Minister Walid al-Muallem highlighted that the US Caesar Syria Civilian Protection Act seeks nothing short of starving the citizens of the Arab Republic. Besides this, the latest batch of sanctions is targeting those engaged in reconstruction activities in the war-torn country.

The Caesar Act came into force on 17 June imposing sanctions on 39 Syrian officials including President Bashar al-Assad and his wife and envisaging penalties against any global actor that does business with Damascus. Nevertheless, the Syrian foreign minister expressed confidence that Damascus would manage to overcome the challenge.

'US Sanctions are a Tool of Regime Change Policy'

The ramping up of the Trump administration's "illegal economic war of sanctions" on the Arab Republic marks "a shift in methodology" in its long-held policy of regime change against Syria, says Mark Sleboda, a US military veteran and international affairs and security analyst.

According to the military veteran, the US has focused on implementing sanctions since a jihadi proxy war and overt military invasion and occupation of Syrian territory and resources have failed thus far to achieve Washington's primary goal - regime change in Damascus.

“The sanctions are multifaceted and target separately and together the Syrian president, his family and top officials, the Syrian political and economic elite, and the larger Syrian population".

Though the White House is claiming that the measures "are not intended to harm the Syrian people", they are striving to make the Syrian people "scream" from worsening economic conditions thus "increasing discontent among the Syrian elite by further impoverishing and isolating them", according to Sleboda.

The US has instrumentalised its sanctions policy against Syria for decades and gradually stepped up the restrictions since the beginning of the civil war in 2011. Speaking to the UN Security Council in April 2020, Russia’s Permanent Representative to the UN, Vassily Nebenzia, highlighted that a series of sanctions imposed by the US, the EU, Canada, and Turkey on Syria over the years pose a serious challenge to the country amid the coronavirus pandemic as they prevent nations from providing the Arab Republic with medical equipment. 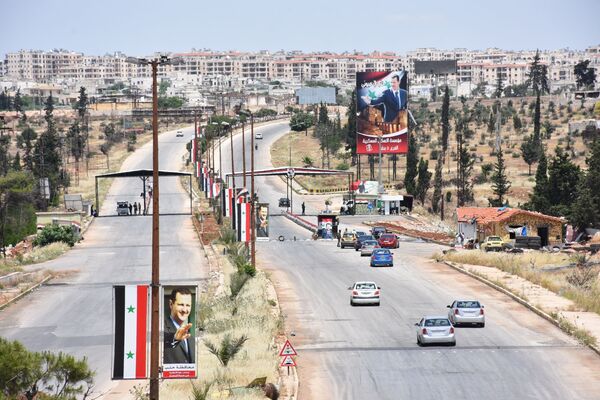 A view shows vehicles driving in Syria's northern city of Aleppo on the third day of Eid al-Fitr holiday as coronavirus restrictions are eased amid the COVID-19 pandemic, on May 26, 2020.
© AFP 2022

'Assad Doesn't Have to Go': What's Behind Washington's Remark

Special Representative for Syria Engagement James F. Jeffrey's remark that the US is no longer insisting that Assad "has to go" does not mean any change of heart among Washington's policy makers, Sleboda suggests, adding that the envoy's statement that US sanctions are about changing "regime behaviour" should not be taken at face value or seriously.

"Among the long list of sanctions against Syria are not only sectoral and secondary sections against the Syrian economy, but also specific individual sanctions targeting the person of the Syrian president, his top officials, and even his wife and family. To suggest therefore that 'regime change' is not the goal of this illegal economic war is pure obfuscation and crude sophistry", the analyst emphasises.

Washington's statements are actually nothing new, he notes, recollecting that they "date back to Trump first taking power in the US and a shift in tone in Washington in line with his campaign rhetoric against policies of 'regime change' abroad". However, the US policy towards Syria has not changed over the years, just Washington's way of carrying it out has.

Anti-Syria Sanctions Have Negative Impact on the Whole Region

Trump's sanctions policy has recently met some criticism from Stratfor, an American geopolitical intelligence platform, sometimes referred to as the "shadow CIA". The entity suggested that the White House's Syria sanctions policy will keep the Arab Republic "firmly in Russia and Iran's corner". According to Sleboda, the geopolitical impact of sanctions is even bigger than that as they negatively affect "the wider regional economy and stability".

"It has already been widely noted in the Western and Gulf media that the brutal sanctions on Syria are having a devastating knock on effect also on the economies and peoples of Lebanon, Iraq, the US puppet Kurdish pseudo-state in east Syria, Jordan and elsewhere, as these regional economies are interconnected and dependent on each other for trade", Sleboda points out.

According to the analyst, the severe consequences of the US sanctions policy "are certain to also further politically destabilise the greater Levant and Middle East leading to a resulting power vacuum and increased terrorism in a vicious circle". Besides this, some in the Gulf Cooperation Council feel concerned that the sanctions will prevent them from reconciling with Damascus and taking part in lucrative reconstruction projects in the Arab Republic as well as gaining some political leverage against the Syrian authorities, Sleboda opines.

Thus, the United Arab Emirates (UAE) has found itself in America's crosshairs over its rapproachement with the Assad government and opening an embassy in Damascus. On 17 June, James Jeffrey singled out the UAE, threatening it with the Ceasar Act: “Anyone who engages in economic activities, whether in the UAE or in other countries...may be targeted by these sanctions", the US official said.

It appears that reconstruction and investment in the Syrian Arab Republic will be solely from Russia, Iran, China, and others, Sleboda underscores, adding that it will "further cement those states' influence on the geopolitical orientation of Syria, if that was even in doubt".