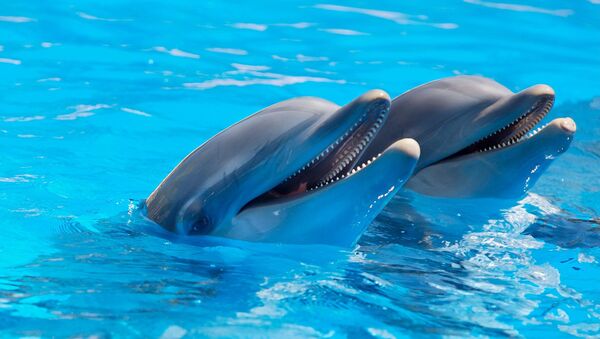 They are one of the most intelligent animals in the world, with a complex form of communication, and are capable of self-awareness. Scientists know that the aquatic mammals use tools to play games and even to catch prey, something researchers think they are taught by their mothers.

Dolphins teach each other how to be better hunters, says a new study conducted by an international team of scientists. According to the research, published on 25 June in the journal Current Biology, dolphins not only learn new ways to catch prey, but are eager to learn from their peers.

"Our study shows that the foraging behaviour 'shelling,' where dolphins trap fish inside empty seashells, spreads through social learning among close associates. This is surprising, as dolphins and other toothed whales tend to follow a 'do-as-mother-does' strategy for learning foraging behaviour", said Sonja Wild, lead author of the study.

The "shelling" that Ms Wild is referring to is a hunting technique during which dolphins chase their prey (in this case a fish) into an empty shell of a giant gastropod. When the fish is trapped inside the shell, a dolphin inserts its beak into it, brings it to the water surface, and then shakes it in order to drain the water so that the fish falls into its mouth.

Another hunting technique that the aquatic mammals use involves sponges, which are used for mouth protection and as a way to catch a prey.

Scientists say the findings of the study help them to understand how dolphins may be able to adapt behaviourally to changing environments. Learning from peers allows for the spread of novel behaviour across populations, which in turn gives dolphins a better ability to survive. This learning process also highlights similarities between cetaceans and great apes.

"The fact that shelling is socially transmitted among associates, rather than between mother and offspring, highlights the similarities between cetaceans [a group including dolphins, whales, and porpoises] and great apes in the way cultural behaviours are passed on", says Michael Krützen of the University of Zurich, who initiated the study. "Despite having divergent evolutionary histories and occupying different environments, there are striking similarities between cetaceans and great apes: both are long-lived, large-brained mammals with high capacities for innovation and cultural transmission of behaviours".