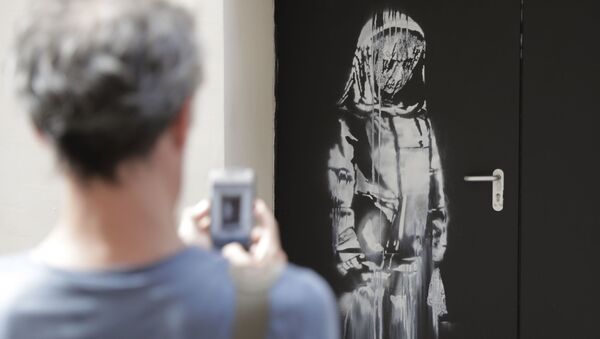 The graffiti that was painted on an emergency door at the Bataclan music hall in Paris was cut out and removed by a group of men using angle grinders last year.

At least six people have been arrested in connection with the heist of Banksy’s Bataclan artwork, AFP reported on Saturday, citing police and judiciary sources.

The suspects, arrested in Isère and Haute-Savoie, have been placed in pre-trial detention. Two of them have been charged with organising the heist, and the four others with concealment of the stolen artwork, the same sources added.

​The English artist's work, which depicts a young woman mourning, was dedicated to the victims of the 2015 terror attacks in Paris, which claimed the lives of 130 people and injured over 400 more. It was stolen from the Bataclan music hall in 2019 and was found this month during a police operation in Italy.