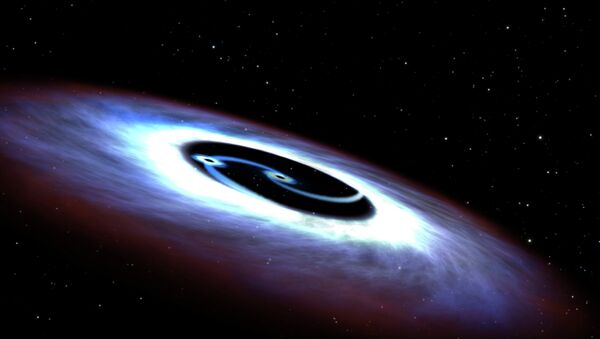 © REUTERS / NASA
Subscribe
Quasars are the most energetic objects in the universe and emit tremendous amounts of energy as they are powered by supermassive black holes that, in turn, are surrounded by accretion disks that they feed off.

An international team of scientists has discovered the most massive quasar known in the early universe, which contains a monster supermassive black hole with a weight equivalent to 1.5 solar masses. It was formally dubbed J1007+2115, but since it was discovered via telescopes on the mountain Mauna Kea in Hawaii, the scientists decided to give it a Hawaiian name - Poniuaena, which means "unseen spinning source of creation, surrounded with brilliance".

Poniuaena is the most distant quasar that has been observed and hence the earliest known object in the universe. It takes light emitted by it 13.02 billion years to reach the Earth, which means its journey started about 700 million years after the Big Bang.

Another fascinating detail that puzzled scientists is the size of the supermassive black hole that the quasar contains. Researchers say the discovery presents a big challenge to the theory of the formation of black holes, as scientists don’t know how such a humongous one materialised when the universe was in its earliest days.

"It's the earliest monster of this kind that we know of. The time was too short for it to grow from a small black hole to the enormous size we see”, said Jinyi Yang, a postdoctoral research associate at the University of Arizona's Steward Observatory and lead author of the study.

According to the current theory, stars and galaxies, as well as supermassive black holes, formed during the Epoch of Reionisation about 400 million years after the Big Bang. It lasted just a hundred million years, a blink of an eye in space terms. The researchers say the discovery of Poniuaena will shed light on the processes that occurred during this period.

"This quasar looks like it was detected right at the mid-point of that period and the fact that we can observe these objects helps us refine what happened during that period”, said Xiaohui Fan, a co-author of the study, Regents' professor, and associate head of the Arizona Department of Astronomy.

000000
Popular comments
Gee whiz, doesn't anyone proof read these things? A supermassive black hole of i.5 solar masses?
plopsy
26 June 2020, 22:12 GMT1
000000
Newsfeed
0
New firstOld first
loader
LIVE
Заголовок открываемого материала
Access to the chat has been blocked for violating the rules . You will be able to participate again through:∞. If you do not agree with the blocking, please use the feedback form
The discussion is closed. You can participate in the discussion within 24 hours after the publication of the article.
To participate in the discussion
log in or register
loader
Chats
Заголовок открываемого материала
Worldwide
InternationalEnglishEnglishMundoEspañolSpanish
Europe
DeutschlandDeutschGermanFranceFrançaisFrenchΕλλάδαΕλληνικάGreekItaliaItalianoItalianČeská republikaČeštinaCzechPolskaPolskiPolishСрбиjаСрпскиSerbianLatvijaLatviešuLatvianLietuvaLietuviųLithuanianMoldovaMoldoveneascăMoldavianБеларусьБеларускiBelarusian
Transcaucasia
ԱրմենիաՀայերենArmenianАҧсныАҧсышәалаAbkhazХуссар ИрыстонИронауОssetianსაქართველოქართულიGeorgianAzərbaycanАzərbaycancaAzerbaijani
Middle East
Sputnik عربيArabicArabicTürkiyeTürkçeTurkishSputnik ایرانPersianPersianSputnik افغانستانDariDari
Central Asia
ҚазақстанҚазақ тіліKazakhКыргызстанКыргызчаKyrgyzOʻzbekistonЎзбекчаUzbekТоҷикистонТоҷикӣTajik
East & Southeast Asia
Việt NamTiếng ViệtVietnamese日本日本語Japanese中国中文Chinese
South America
BrasilPortuguêsPortuguese
NewsfeedBreaking
17:32 GMTKorean Treat and Eurovision Winner Among Most Mispronounced Words of 2021
17:24 GMTWhitehall Union Claims Victory After Court Dismisses its Case Against Johnson and Patel
17:14 GMTPope Francis Stumbles on Airstair as He Boards Plane in Greece - Video
17:02 GMTTrump’s Social Media Listing Vehicle Says Under Inquiry From US Securities Investigators
16:47 GMTRussia, Egypt Start Naval Phase of 'Bridge of Friendship-2021' Drills in Mediterranean
16:40 GMTUS Reportedly Mulls Cutting Russia Off SWIFT, Sanctioning Energy Producers & 'Putin's Inner Circle'
16:37 GMTFinland’s PM Parties at Nightclub Until 4am After Contact With COVID-Positive Official
16:14 GMTSecond Week of Ghislaine Maxwell Sex Scandal Trial Kicks Off
15:56 GMTBoost for Britain! Is the UK’s COVID-19 Third Jab Campaign Saving Lives?
15:55 GMTWestminster Preparing 10-Year War on Drugs in Attempt to Defeat County Line Gangs
15:44 GMTIsrael Will Reportedly Push US to Strike Iranian Facility Amid Lack of Progress in Vienna Talks
15:41 GMTAmerica Unveils First-Ever Strategy to Battle Corruption at Home and Abroad
15:30 GMTChina May Build Military Base in Equatorial Guinea Amid Beijing’s Tensions With Washington
15:15 GMTKremlin: Putin Will Listen to Biden's Proposals on Ukraine 'With Great Interest'
15:15 GMTNYC to Use 'Preemptive Strike' Against Omicron With Vaccine Mandate for all Businesses, Mayor Says
15:08 GMT3,000 Security Officers Guard India's Mathura as Hindu Group Threatens to Install Idol in Mosque
14:59 GMTAmid Rumours of US Boycott of Beijing Olympics, How Could the Move Affect the Games?
14:52 GMTUK Policing Minister Not Surprised Over Reports of Drug Use in Parliament Building
14:45 GMTLabour Unions Protest in Brussels Against Low Wages, Expensive Electricity - Photos
14:26 GMTSpanish Court Rules Employee Can be Fired for Job Abandonment During Pandemic - Reports