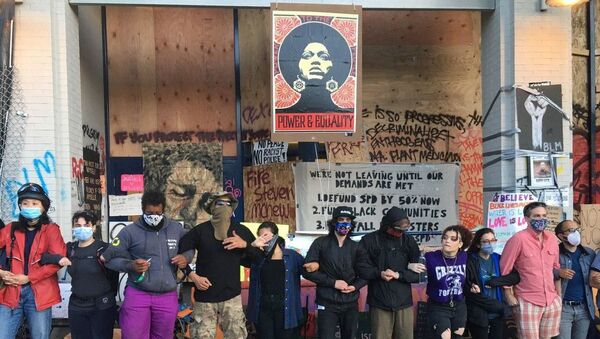 © Sputnik
Subscribe
Ekaterina Blinova
All materialsWrite to the author
On Monday, Seattle Mayor Jenny Durkan announced that the authorities will work with community leaders and African-American organisations to dismantle the so-called Capitol Hill Organized Protest (CHOP) zone following the rise in gun violence there. US observers have discussed whether Durkan will be able to uproot the violence she allowed to happen.

The area has been occupied by thousands of protestors for about two weeks amid the nationwide unrest over the killing of George Floyd, a 46-year old black man, by a white police officer on 25 May.

On 12 June, the demonstrators declared the streets near Cal Anderson Park in the city's Capitol Hill neighborhood an "autonomous zone" free from police. The mayor did not resist the move but endorsed the demonstrators’ First Amendment rights and supported their cause, which prompted Donald Trump to lambast Durkan's inaction and dub the establishment of CHOP an "anarchist" takeover.

​'Seattle Mayor is Either Naïve or Seeking to Upend the System'

It's highly unlikely that the Democratic mayor will manage to put the genie back in the bottle after she let it out, predicts Wall Street analyst Charles Ortel.

"The 'movement' is inflamed by martyrs so, given the incompetence of the Seattle mayor, the suspect motives of agitators involved and the overarching goal of leftists to remove President Trump at all costs, I suspect the violence will continue, even if a miracle occurs in Seattle restoring a semblance of law and order for a time", the analyst argues.

According to Ortel, the Seattle mayor and the city's community activists are either naïve or "co-conspirators in a longstanding plot to overthrow the American system from within".

"They are naive because they must understand that criminals own and hoard unregistered guns, while law-abiding gun-owners practice safety and own their weapons for self-defense and for sport", he says. "Announcing that a portion of a large city will fall outside police authority serves as a magnet attracting the worst criminal elements. If they are also co-conspirators, they are animated by junk 'thinking' spewed out from 'professors' who admire unregulated globalism and decry the nation-state".

Durkan is not the only Democratic official who has endorsed the George Floyd protests and lent a sympathetic ear to their call for defunding the police, though the demonstrations on multiple occasions turned violent and were accompanied by looting and clashes. New York City, San-Francisco and some other Democratic strongholds are now considering substantial cuts to the police budget, with Minneapolis City Council members earlier pledging to dismantle the police department altogether.

Taking a walk down the memory lane, the analyst highlights that it was the Democratic administration led by President Barack Obama "who upended the Middle East and Ukraine". Now the Democrats "appear [to be] dedicated to spark a Tahrir Square or Maidan moment inside the United States, in a last ditch hope to wound President Trump politically well before 3 November 2020", according to Ortel. 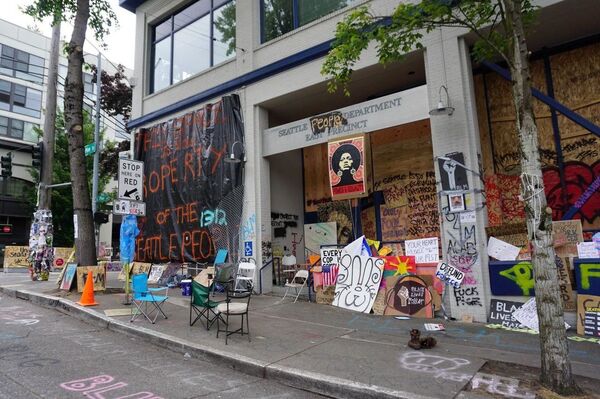 Having faced a deadly shooting in CHOP, Mayor Durkan and Washington Governor Jay Inslee now find themselves on the horns of a dilemma, according to Max Parry, an independent American journalist: though they are striving to bring an end to gun violence, they at the same time cannot dismantle CHOP by force, engaging, for instance, the National Guard, especially after Trump threatened to invoke the Insurrection Act to quell the protests.

"Now the Democratic politicians in Washington have to live with the monster they created, so to speak, where the governor and the city are essentially allowing this to go on and are not in a position to call for help in quashing it without jeopardising themselves politically", Parry points out. "To quell protests with the use of force, the very thing being protested and a cause Democratic politicians are expected to be sympathetic to, would be a very risky move. "

He foresees that only after the tide of public opinion locally in Seattle turns against the protest zone, will the local authorities be able to do something.

​Still, it appears very suspicious to the journalist that Democratic officials allowed the protesters to simply take over the police precinct unchallenged: "We've never seen anything like it", he stresses, adding that at the same time "it also calls into question the legitimacy of the movement politically". 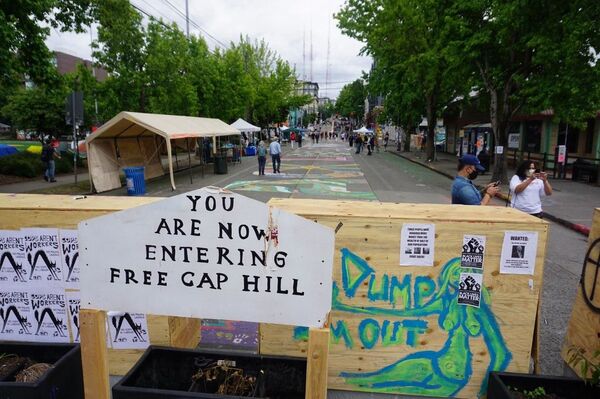 "However, the Democratic politicians are not sincere at all in their purported sympathies with the protesters but are rather using them as political chess pieces. It's very cynical", Parry believes.

Referring to Democrats' calls for removing Confederate statues and renaming streets after the Black Lives Matter movement, the journalist dubbed these initiatives "empty gestures", as the politicians have so far failed to enact "any substantive legislation in regards to what set off these protests initially in the excessive use of force by law enforcement".

Ortel appears to agree with this stance. Ironically, many cities suffering from systemic racism are those long ruled by Democrats, the analyst remarks: "It is a sad fact that too many Democrats are 'merchants of misery' – how else can you explain the chokeholds they have exercised, for decades over the worst run cities and states in America?"

"Where Americans want solutions, Democrats spew trite slogans that are even older and more pathetically corrupt than the presumed standard-bearer for Democrats, Joe Biden", Ortel says. "All Americans crave opportunity, dignity, and justice. When you look carefully at population movement inside the United States, you will see that Americans are already voting with their feet. They are leaving mob rule cities and states for places that embrace business activity and law with order."

000000
Popular comments
Wall it in and let it eat itself to death.
coronahoax
26 June 2020, 10:24 GMT
000000
This CHOP will haunt the US one day & the Democratic political elite in Seatlle will be remembered for their inaction.