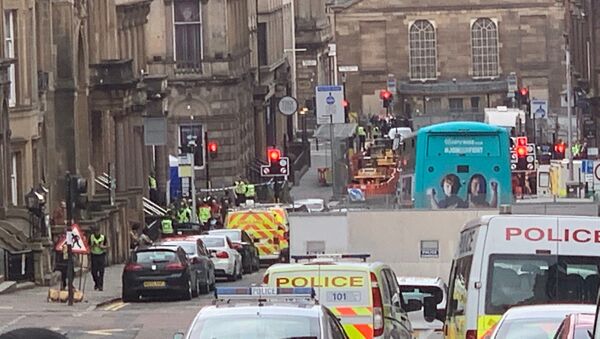 A knife incident rocked the Scottish city of Glasgow on Friday afternoon, when a man attacked multiple people in broad daylight. Six people, including a police officer, have been hospitalised, while police have ruled out that the attack is terror-related.

A man armed with a knife went on a stabbing spree at the Park Inn Hotel on West George Street in Glasgow, injuring a number of people.

Six people were admitted to hospital, including a police officer who sustained knife injuries. His condition is critical but stable. The suspect was shot dead by law enforcement at the scene.

Police Scotland said the incident is not being treated as terror-related.

Earlier unconfirmed reports suggested that three people were killed in the stabbing.

EDINBURGH, United Kingdom (Sputnik) - The hotel in the Scottish city of Glasgow that was the site of a knife attack was being used to house refugees and asylum seekers during the ongoing COVID-19 outbreak, an eyewitness at the scene told Sputnik.

"Those hotels are full of refugees that have been housed in there for the coronavirus", the eyewitness, named John, said.

The eyewitness described the scene as “carnage” and said that he attempted to provide first aid to a maintenance worker that was stabbed during the incident, which took place at a Park Inn hotel on West George Street.

"There was the receptionist and the maintenance guy lying on the floor, blood pouring out of them, three people out in the street that were staying in the hotel as well stabbed, and the guy had run back up to his room. The police have come in, went up to the room … shot the guy … I was lying on the floor trying to help the maintenance guy with a big puncture wound, trying to compress his wound", the eyewitness said.

A bus driver who spoke on condition of anonymity told Sputnik that the incident took place at roughly 13:00 local time [12:00 GMT]. He was near the scene of the incident and was blocked in after the police began establishing a cordon around the hotel.

"I let off two passengers, closed my doors, moved off and then I couldn’t move any further because a van had stopped in front of me. It was blocked in by an illegally parked car in the front. I saw the armed police running in, that’s what I saw. I went ‘oh what’s happened?’” the bus driver said. 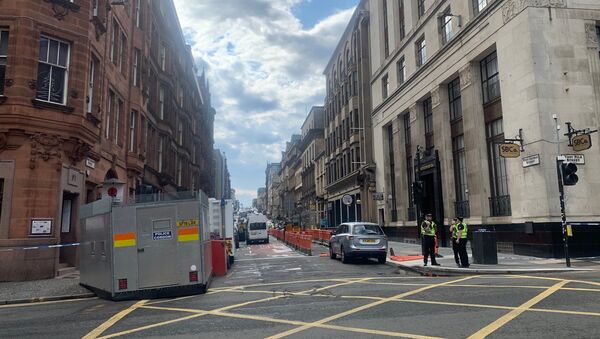 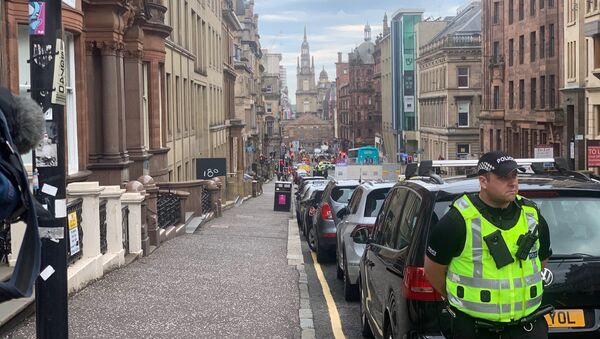 The following footage contains scenes that some may find disturbing.

Footage showing the stabbed police officer being attended to by other officers and what appears to be another stabbing victim sitting on the stairs. pic.twitter.com/JiiNVIpeXP

"We are continuing to deal with the incident on West George Street #Glasgow and would ask people to avoid the area. We would urge the public not to speculate about this incident or share unconfirmed information on social media."

Reports from today’s incident in Glasgow are truly awful.

My thoughts are with the victims and their loved ones at this difficult time.

The reports from Glasgow City Centre are truly dreadful. My thoughts are with everyone involved. I am being updated as the situation becomes clearer. Please help the emergency services do their jobs by staying away from the area - and please don’t share unconfirmed information.

Deeply saddened by the terrible incident in Glasgow, my thoughts are with all the victims and their families.

Thank you to our brave emergency services who are responding.

"However, I would like to reassure the public that this is a contained incident and that the wider public is not at risk. Armed police officers attended the incident and I can confirm that a male suspect was shot by an armed officer."

MOSCOW (Sputnik) - A police officer was injured in an incident in Glasgow, a suspect was shot, Assistant Chief Constable Steve Johnson said Friday,

"Armed police officers attended the incident and I can confirm that a male suspect was shot by an armed officer," Johnson said in a statement quoted on the Police Scotland Twitter account.

"I would like to reassure the public that at this time we are not looking for anyone else in relation to this incident. I can also confirm that a police officer was injured while dealing with the incident and that officer is receiving treatment in hospital," he added.

​"I saw a man lying on the ground, of African descent, with no shoes on. He was on the ground with someone holding his side - I don't know if it was a bullet wound, a stab wound, or what it was", Craig Milroy, a witness, told the PA news agency.