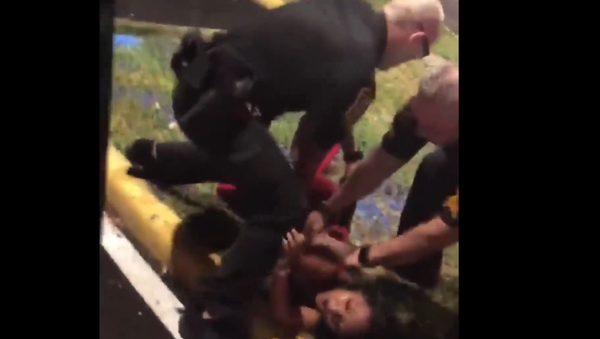 A recently-fired Miami Gardens, Florida, police officer has been booked and charged with battery and misconduct, following the emergence of disturbing video footage that both depicted the cop using “excessive force” on a Black woman and contradicted his subsequent reports.

Jordy Yanes Martel, a 30-year-old ex-cop with the Miami Gardens Police Department (MGPD), turned himself in to the Miami-based office of the Florida Department of Law Enforcement (FDLE) on Thursday.

Martel was fired from the MGPD on June 18, in connection with a complaint that referenced a video recorded in March which showed Martel and then-Officer Javier Castano abusing Miguel McKay, a Black man, over the suspicion that he may have been “doing doughnuts” with his car in the parking lot of a local gas station. Castano was also fired.

However, Martel was charged on Thursday with two counts of official misconduct and four counts of battery over an even earlier altercation that was caught on camera and showed the officer abusing another Black person, identified as Safiya Satchell, during an early morning arrest near Tootsie's Cabaret on January 14.

The manager of the club reportedly asked officers to issue a trespass warning to Satchell, after she allegedly threw a tip at a Tootsie’s waitress. The following scene ensued:

Be advised, the following footage contains content that some parties may find disturbing.

Many outlets have identified that Satchell was in the early stages of her pregnancy; however, she did not carry the child to full term. Neither Martel nor the other responding officers have been linked to that matter, reported Forbes.

“Once forcibly removed from the car, Martel took Ms. Satchell to the ground. And once on the ground, Martel allegedly used excessive force by putting his knee on Ms. Satchell’s neck and dry tasing her twice,” she said on June 25.

Satchell “suffered abrasions to her stomach from the Tasers, bruises and abrasions on her arms and bruises on her legs,” according to the state attorney.

While Satchell was arrested on allegations of battery on an officer and resisting arrest with violence, those charges have since been dismissed, and the now-viral video appears to refute Martel’s reports on the matter.

Furthermore, the FDLE investigation concluded Martel “had no legal authority to detain the victim” when he first removed her from the vehicle, reported NBC Miami. Authorities noted that Martel chose to deploy his department-issued stun gun twice, despite other officers having “control over both the victims’ arms.”

"Martel said the defendant became aggressive, but the video refutes this,” Rundle argued Thursday. “Martel was the aggressor when he went into the woman's car without any evidence that she had committed a crime.”

The state attorney asserted that her office treats accused law enforcement officers “no differently than anyone else.” However, the Miami Herald reported in February that at least three officers of the Miami-Dade Police Department have been acquitted of charges that stemmed from several officers’ kicking and slapping of handcuffed suspects.

Miami Gardens Police Chief Delma Noel-Pratt asserted that the termination of Martel and Castano was necessary “because the behavior was egregious and will not be tolerated at the department,” as reported by Local 10 TV. The resisting arrest charge leveled against McKay was dropped by the state during a June 18 court hearing.

Citing personnel files, the outlet reported that Martel was also the subject of an internal affairs investigation tied to a February charge of improper procedure investigation, along with the March charge of excessive force.

Martel, hired by the department back in October 2018, was seen leaving a local jail on the same day that he turned himself in. CBS Miami noted that he was booked into the Turner Guilford Knight Correctional Center on a $6,000 bond.

The outing of Martel’s misconduct comes amid ongoing anti-police brutality protests and demonstrations in the US, which particularly focus on the too-frequent deaths of Black Americans during police interactions. Many have called for the defunding of police forces nationwide and a reappropriation of funds toward local, unarmed social services.

“If you’re an officer that has broken policy or acted under color of law with a belief that Black lives don’t matter, you ought to be looking over your shoulder, because the chickens have finally come home to roost,” Satchell’s attorney Jonathan Jordan said in a statement provided to the Miami Herald.

“My client deserves to witness justice be served in this prosecution against this former officer where so many others in her position have not been as fortunate.”