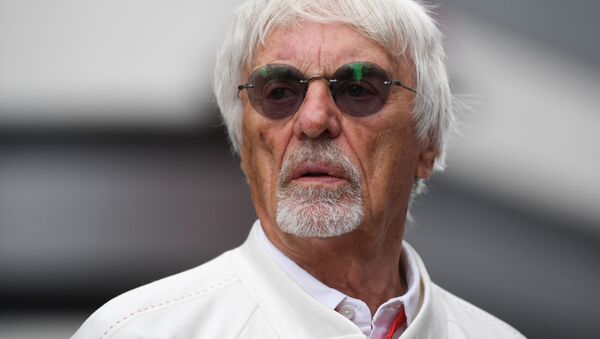 Bernie Ecclestone, who stepped down from his top F1 post in 2017, said that the diversity issue wasn’t as pressing during his time as boss of the auto racing company as it is now.

Former head of the Formula One Group Bernie Ecclestone has said that “in lots of cases, black people are more racist than what white people are”, while praising the drive for diversity demonstrated by current F1 chief and BLM supporter Lewis Hamilton, CNN quoted him as saying.

“People ought to think a little bit and think: 'Well, what the hell. Somebody's not the same as white people and black people should think the same about white people”, Bernie Ecclestone, who was replaced as chief executive of Formula One in 2017, shared.

When asked if he could provide any evidence to prove his stance regarding “black people’s racism”, Ecclestone said it was his personal observation - something that he had “noticed" over the years.

Ecclestone went on to note that he has no regrets about not addressing the issue of diversity and inclusion while in charge of the iconic auto racing company, saying that he doesn’t think “anyone bothered about it before”.

He admitted, though, that it is a crucial issue, but “it's been there so long [and] nobody's done anything”, he went on. “Why didn't someone do something two or three years ago?” he queried, before attempting to answer his one question, citing the experience of F1 members:

"They're too busy trying to win races or find sponsors or something”.

Speaking of Hamilton’s involvement in the BLM protests, which were triggered by the death of African-American man George Floyd at the hands of Minneapolis police, Ecclestone dwelled on the current F1 head’s recollection of how he faced racism during his career, including an incident in Spain that saw him taunted by fans in blackface in 2008.

"I'm surprised that it concerns him”, Ecclestone remarked, although sharing his disappointment about his colleague taking the incident seriously.

"I'm really unhappy if he took it seriously. I never thought he did. I didn't think it affected him”, he said.

The global BLM movement spawned by the death of black American bouncer and truck driver George Floyd on 25 May has seen hundreds of thousands take to the streets around the world to protest against police brutality and racial injustice at large. The wave has also penetrated the corporate sphere, with historic brands pulling their signature imagery featuring black chefs and cooks like Uncle Ben or Aunt Jemima from their products. However, critics say the superficial moves connected with imagery revision and rebranding are ludicrous and by far not enough to combat racial bias, as more profound steps are needed for greater inclusion and diversity.