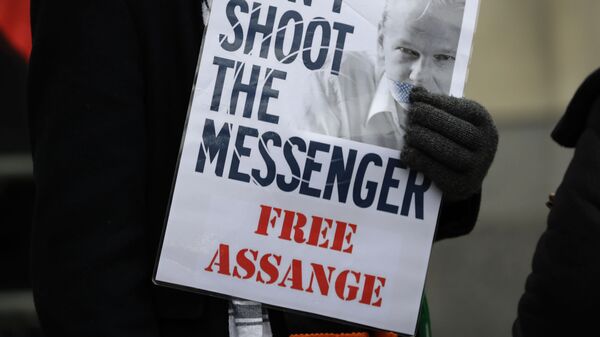 A US federal grand jury has unveiled a new superseding indictment against WikiLeaks co-founder Julian Assange. However, the filing brings no new charges. A journalist told Sputnik that what Assange does is no different from other reporters and the indictment is an attempt to sour Assange’s name in the media again.

“It’s a continuation of the smear campaign against this man, to turn public opinion against him,” Joe Lauria, the editor in chief of Consortium News and author of the book "How I Lost, By Hillary Clinton," told Radio Sputnik’s Loud and Clear Thursday. “It’s started to turn for him in certain instances recently, so the timing of this is interesting.”

Lauria characterized the new accusations as “window dressing,” noting much of the document is simply a recapitulation of the previous charges against Assange.

According to the US Department of Justice’s Wednesday news release announcing the indictment, the new accusations “broaden the scope of the conspiracy surrounding alleged computer intrusions with which Assange was previously charged,” alleging he worked with hacker groups like Anonymous and LulzSec to gain access to classified files that WikiLeaks then published.

“This is new: they write negatively about him helping [former NSA analyst-turned-whistleblower Edward] Snowden to get out of Hong Kong and that Assange had booked various other flights for Snowden to provide a diversion, so that he could get out on the one he did,” Lauria noted. “But there’s no charge of ‘aiding a fugitive to get away’ or anything like that, so that’s just thrown in there. We don’t know why.”

“The real essence is, as you say, the details to broaden this first indictment against him, which was for computer intrusion. And, essentially, it says that Assange directed hackers to get material. For example, one example is the recordings of high-level NATO officials, telephone calls that he wanted; also members of parliament of a NATO nation that is apparently Iceland.”

Lauria said that to understand if this is a crime or not, he turns to investigative journalist Robert Parry, who founded Consortium News. Lauria noted a piece Parry wrote in 2010, anticipating Washington’s line of attack against Assange, in which he said that what Assange had done was no different than what he did as an investigative reporter, including encouraging sources to give information, and even to commit a small crime in order to prevent a larger one.

“This is key, because here we have in this expanded, superseding indictment, that Assange somehow committed a conspiracy with these hackers to get this information,” Lauria said.

“Now, first of all, he’s not being accused of doing the hacking himself; he is accused of encouraging or directing - but not for money, by the way - these hackers to get documents and other materials that he wanted. So maybe two crimes are being committed there: one being the hack, and two, the unauthorized release of information. But Assange is not directly involved, so he’s doing what Bob Parry said he did as a reporter, and that was to get your source to commit a small crime [in order] to prevent a larger one. An example of that is Assange getting from [former US Army analyst Chelsea] Manning the ‘Collateral Murder’ video … the idea being to try to end the illegal war in Iraq,” Lauria told Sputnik.

“On top of that are the issues of the sources,” the journalist said, noting that one of the sources for the indictment, an FBI informant, was thrown out of Iceland in 2011 after Interior Minister Ögmundur Jonasson feared the arrival of FBI agents was an attempt to frame Assange. “We don’t even know if this was Assange’s initiative, to ask for these materials or not. It’s bogus, but it’s a smear, and it’s also a smear again to show that he’s not a journalist, he’s a hacker - this is the idea.”

Assange is currently being held in Belmarsh Prison in the United Kingdom, where he is contesting potential extradition to the United States. The 18 charges combined could result in up to 170 years in a US federal prison.