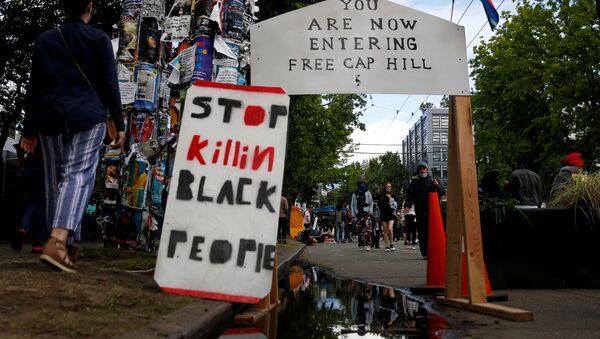 MOSCOW (Sputnik) – Many protesters have left the Capital Hill Organised Protest (CHOP) in the US city of Seattle, one of the protest leaders, hip-hop artist Raz Simone, told the CNN broadcaster.

In a statement posted on Twitter, the Capitol Hill Occupied Protest (СHOP) said that “very few” people remain in the protest zone, and the “CHOP project is now concluded”.

On Monday, Mayor of Seattle Jenny Durkan announced that the city intends to reclaim the neighbourhood taken over by thousands of anti-racism protesters after two shooting incidents in the area over the weekend and multiple complaints from local residents and businesses.

"The cumulative impacts of the gatherings and protests and the nighttime atmosphere and violence has led to increasingly difficult circumstances for our businesses and residents", Durkan said at a news conference. "We can still accommodate people who can protest peacefully, who come there and gather. But the impacts on the businesses and residents and community are now too much."

The so-called "Capitol Hill Organised Protest", or "CHOP", was established by protesters in the vicinity of Capitol Hill about two weeks ago, after police retreated from the East Precinct in the area, with Durkan's approval.

Seattle police have been unable to respond to crime incidents within the "CHOP" for nearly two weeks, as protesters set up armed guards at its perimetre preventing the authorities from entering the zone. The protests have been mostly peaceful, but there have been reports about businesses being asked to pay a "fee" to operate within the CHOP and residents being requested to show IDs to prove they live in the area.

The self-proclaimed autonomous zone was established at the start of June by demonstrators protesting against the police brutality in the wake of George Floyd’s death in Minneapolis police custody on 25 May. On 8 June, Seattle police withdrew from the Capitol Hill district, while leaving the Department's East Precinct building behind, as an act of "trust and de-escalation” after days of clashes with demonstrators.

Shortly after that, US President Donald Trump branded the protesters in the zone “anarchists” and harshly criticized the Mayor of Seattle Jenny Durkan and Washington Governor Jay Inslee for their inaction. Durkan said on 11 June that the zone was “not a lawless wasteland of anarchist insurrection” but rather “a peaceful expression of our community’s collective grief”.