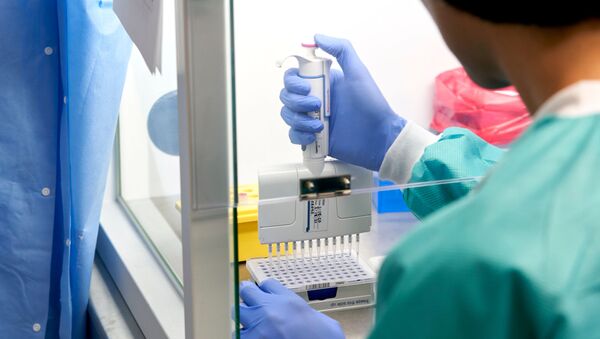 COVID-19 Live Updates: WHO Says 9.2 Mln Virus Cases Have Been Reported So Far

Subscribe
International
India
Africa
The pandemic is running rampant in Latin America, with new cases and fatalities in Brazil, Peru, and Chile. At the same time, European countries are reporting a decline in the number of newly-infected and easing social distancing measures, also announcing the cancellation of travel bans.

At the moment, the US remains the worst-hit nation, with over 2.4 million confirmed cases and more than 124,000 deaths, according to Johns Hopkins University. Brazil comes second with more than 1.2 million infected and at least 54,971 dead, while the UK has the third-highest death toll of 43,314.

MOSCOW (Sputnik) – Germany has confirmed 477 new COVID-19 cases over the past 24 hours, with the total count reaching 192,556, the Robert Koch Institute said on Friday.

The death toll has grown by 21 to 8,948 people within the same period of time. Some 177,100 people have recovered since the start of the outbreak.

A day earlier, the country confirmed 630 new cases and 13 fatalities.

MEXICO CITY (Sputnik) – The number of confirmed COVID-19 cases in Mexico has increased by 6,104 within the past 24 hours and has thus surpassed 200,000, Jose Luis Alomia, the director of epidemiology at the Health Ministry, said.

He also said on late Thursday that the death toll had risen by 736 to 25,060  within the same period of time.

"As of today, 202,951 people have tested positive for COVID-19. Unfortunately, 25,060 people have died of complications of this disease", Alomia said in a televised address.

A day earlier, the Latin American nation recorded 5,473 new confirmed cases of the coronavirus, with 947 fatalities.

MOSCOW (Sputnik) – The number of confirmed COVID-19 cases in Brazil has increased by 39,483 to 1,228,114 within the past 24 hours, the national Ministry of Health said on late Thursday.

A day earlier, Brazil reported about 42,725 new cases of the coronavirus disease and 1,185 new fatalities.

Brazil comes second on a global tally of coronavirus cases after the United States, which has recorded over 2.4 million COVID-19 patients.

WASHINGTON (Sputnik) - California Governor Gavin Newsom declared a budget emergency on Thursday to access budget reserves in order to ensure funds are available for the response to the novel coronavirus pandemic, the Office of the Governor said in a statement.

"Governor Gavin Newsom today issued a proclamation of a budget emergency to make additional resources available to fund the state’s ongoing emergency response to the COVID-19 pandemic, ensuring the availability of funding for personal protective equipment, medical equipment and other expenditures as necessary to support a potential hospital surge and provide necessary services to vulnerable populations", the statement said.

Newsom intends to draw down $7.8 billion from the $16.1-billion Budget Stabilization Account, according to news reports.

The California governor is citing the global economic crisis and a $54.3 billion state budget deficit as a requisite for tapping into the reserve fund.

MOSCOW (Sputnik) – The World Health Organisation (WHO) has estimated the overall number of coronavirus cases globally at 9,296,202, with 479,133 people dead from the disease.

The UN health agency said in the situation report published on late Thursday that 167,056 new cases had been recorded in the past day, while further 5,336 patients had died.

Americas continue to lead the count with over 4.6 million cases, followed by Europe with more than 2.6 million.

MOSCOW (Sputnik) - Moscow has registered 25 deaths of patients infected with COVID-19 over the past 24 hours, bringing the Russian capital's death toll to 3,694, the city's coronavirus response centre said in a statement on Thursday.

"Another 25 patients, who were diagnosed with pneumonia and tested positive for the coronavirus infection, died in Moscow", it said.

In the previous day, 12 people infected with the coronavirus died in Moscow.

Iraq has registered nearly 2,500 new cases of the coronavirus and 107 new deaths over the past 24 hours, which marks a new record high in the daily increment in infections and deaths, the Health Ministry said on Thursday.

"The Health Ministry’s labs have registered 2,473 cases of infection in the past 24 hours. In addition, 107 fatalities and 1,237 recoveries have been recorded," the ministry said.

The update brings the total number of those infected in Iraq to 39,139, and the death toll has thus risen to 1,437. The number of people who have recovered from the coronavirus has reached 18,051.

Over 19,000 are still being treated for COVID-19, with more than 200 of them in intensive care, the ministry added.

The United Kingdom’s COVID-19 death toll has increased by 149 over the preceding 24 hours to 43,230, the country’s Department of Health and Social Care said on Thursday, ahead of the government's plans to further ease lockdown measures.

The latest increase to the death toll is slightly below the 154 deaths reported on Wednesday, and the 171 new deaths confirmed on Tuesday, according to the department’s daily statistical bulletin.

Public health officials also confirmed 1,118 new positive tests for the coronavirus disease over the preceding 24 hours, raising the overall case total to 307,980. This rise is a significant jump from the 653 new positive tests reported on Wednesday.

The US state of Texas has put on hold any further reopening phases after a surge in novel coronavirus cases and hospitalizations in recent weeks, Governor Greg Abbott's office said in a press release on Thursday.

"Governor Greg Abbott today announced that the State of Texas will pause any further phases to open Texas as the state responds to the recent increase in positive COVID-19 cases and hospitalizations," the release said.

Abbott pointed out in the release that businesses in Texas are still allowed to remain open at 50 percent capacity under standard health protocols.

Texas began to gradually reopen the economy after Abbott allowed the stay-at-home orders to expire on May 1.

Belarus has confirmed 437 new cases of the coronavirus infection over the past 24 hours as the spread of the virus continues to slow, with the total tally reaching 60,382, the Health Ministry said on Thursday.

Belarus has been recording less than 500 cases of the infection per day since last week. Earlier in June, the ministry announced that there was a positive trend in reducing the incidence rate of COVID-19.

"We registered 60,382 people with a positive COVID-19 test. As many as 919,139 tests have been conducted. Over the entire period of the spread of the infection in the country, 367 COVID-19 patients with a number of chronic diseases died," the ministry said in a statement, adding that the death toll has grown by five over the past day.

Meanwhile, the number of recoveries among COVID-19 patients has increased to 41,448 since the start of the outbreak, the ministry added.

Parts of the United States facing a surge in COVID-19 cases such as the states of Texas, Florida, Arizona, as well as North and South Carolina face the prospect of renewed shutdowns to slow the contagion, White House economic adviser Larry Kudlow said in an interview on Thursday.

"There are spikes in hot spots. There's no doubt about that," Kudlow told FOX Business News. "And there will be shutdowns in individual places or certain stores. We are keeping a very close eye on this."

However, Kudlow said the spike in new cases in so-called sun-belt states he mentioned needs to be balanced against other parts of the country where infections continue to decline.

New cases on Wednesday in the entire US totalled 34,300, the fourth-highest daily infection count since the start of the pandemic, data published by the Johns Hopkins University showed.

Many of the affected states had been widely criticized for easing their respected lockdown rules too quickly, threatening a resurgence of COVID-19 cases.

MOSCOW (Sputnik) - Senegalese President Macky Sall has put himself under self-isolation for two weeks as a precaution after coming into contact with a person who tested positive for COVID-19, the presidential office said on Thursday.

Seydou Gueye, the president's adviser in charge of communications, said that Sall had taken the COVID-19 test after being exposed to the coronavirus. The results came back negative.

"However, following the doctors’ recommendations on this issue, the president has been isolated for two weeks, starting on Wednesday, 24 June", Gueye said in a statement posted on the office’s Twitter account.

MOSCOW (Sputnik) - Russia has registered 7,113 COVID-19 cases over the past 24 hours (7,176 yesterday), bringing the total count to 613,994, the country's coronavirus response centre said on Thursday.

KIEV (Sputnik) - Ukraine has seen a record spike in COVID-19 cases over the past 24 hours, with the total tally of infected persons surging by 994 to 40,008, Health Minister Maksym Stepanov said on Thursday.

The Indian Health Ministry on Thursday said that the total number of coronavirus cases in India has reached 473,105, with the death toll increasing to 14,894.

In last 24 hours, 418 people have succumbed to the disease, with 16,922 new cases reported during the same time period. Additionally, a total of 13,012 COVID-19 patients have been cured.