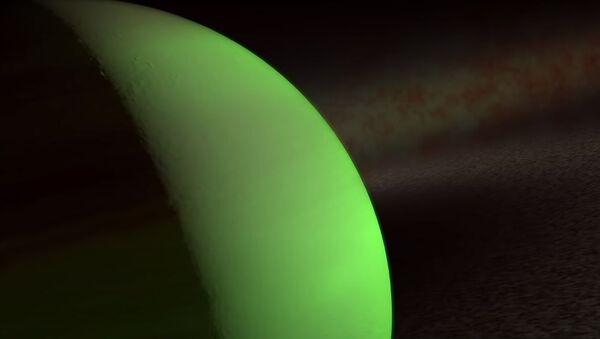 Astronomers say the new research, which was published on 24 June in the journal Nature, will allow them to study how planets interact with their stars as well as provide more understanding about how planets form and evolve.

An international team of scientists have discovered an exoplanet that is 8 percent larger than Neptune, the fourth-largest planet in our Solar System. It is located in the constellation Microscopium, 32 light years away from the Earth and orbits the star AU Microscopii (AU Mic) that scientists have long been interested in.

Au Mic is estimated to be 20 to 30 million years old, an infant in cosmic terms and is surrounded by a disk of debris and gas, left after its formation. Researchers previously theorized that AU Mic may be home to a planet and have been searching to prove their hypothesis for a decade.

Thanks to NASA’s Spitzer Space Telescope and Transiting Exoplanet Survey Satellite (TESS) scientists were able to detect the exoplanet, which they named AU Mic b. It completes its orbit around the star in 8.5 Earth days.

Scientists say they plan to use the AU Mic system as a "nearby laboratory" that will bring them closer to understanding how planets formed and evolved. According to NASA the system is part of the collection of stars called the Beta Pictoris moving group. This group has a star named Beta Pictoris of the same age as AU Mic, but their exoplanets are notably different.

AU Mic b weighs less than 58 times Earth’s mass and as mentioned earlier completes its orbit in just 8.5 Earth days. The exoplanets Beta Pictoris b and c, orbiting Beta Pictoris are humongous (50 times more than AU Mic b) and it takes them 21 and 3.3 Earth years to orbit their star.

"We think AU Mic b formed far from the star and migrated inward to its current orbit, something that can happen as planets interact gravitationally with a gas disk or with other planets", said Thomas Barclay, study co-author and associate project scientist for TESS at NASA's Goddard Space Flight Centre in Greenbelt, Maryland, in a statement. "By contrast, Beta Pictoris b's orbit doesn't appear to have migrated much at all. The differences between these similarly aged systems can tell us a lot about how planets form and migrate".

Scientists say they plan to study the AU Mic system further, in particular they want to examine the atmosphere of the exoplanet and find out whether there could be a second planet around the star.