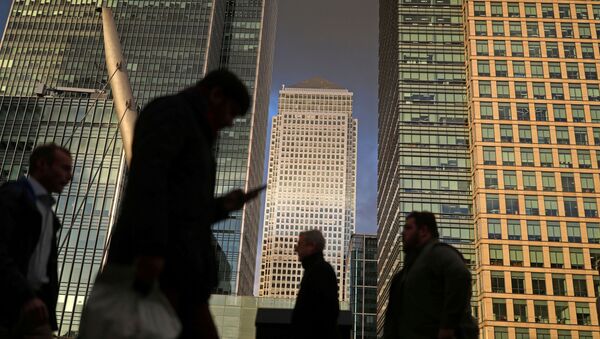 © REUTERS / Simon Dawson
Subscribe
The European Union remains the UK’s largest trading partner. In 2018, Britain’s financial services exports to the EU were valued at £26 billion ($32.5 billion). However, following the UK’s departure from the union, Brussels may now have to rethink its financial relationship with London.

The Boris Johnson government’s post-Brexit financial regulations plans published on Tuesday are now putting pressures on Brussels to determine whether British investment groups will still be granted access to the EU market, according to the Financial Times.

As the 11-month Brexit transition period is set to end on 31 December, the UK’s Treasury has outlined draft regulations relating to banks, derivative traders, asset managers, and other financial actors that will eventually overtake EU rules. The Treasury maintained that it will commit to “the same high standards” of financial regulation reflecting existing EU rules, including the Basel Accords banking regulations, but many believe that some changes and divergence from the bloc’s rulebook will be unavoidable in the post-Brexit world.

According to analysts and lawyers cited by the Financial Times, the published plans show that London will now take a different approach in some industries, such as fund management. The Financial Conduct Authority (FCA), the UK’s regulatory body, said that Britain is now set to reduce “regulatory costs”, while prioritising potential harm to clients rather than risk to groups.

“This is an important development, insofar as the FCA has stated that it will tailor the rules for the UK market but expects the result to be in line with the EU rules”, Sean Tuffy, head of market and regulatory intelligence at Citi, told the media. “This is going to be a test of the UK’s preferred ‘outcome-based’ approach around regulatory equivalence”.

Brussels will thus have to decide whether this so-called “outcome-based” approach will be viable enough to allow British financial actors to remain full-fledged participants in the EU financial market.

But this decision on “financial equivalence” remains important for Britain, whose economy heavily depends on the exports of financial services. In 2018 alone, the European Union, the UK’s leading trading partner, imported £26 billion worth of British financial services, which accounted for 22% of the country’s service exports to the bloc. Overall, the services accounted for nearly half of all the UK’s exports to the EU in 2019.

French Minister Takes Swipe at Boris Johnson: UK ‘Needs’ Deal with EU Most After ‘COVID-19 Shock’
On 31 January, Great Britain officially left the European Union and entered the transition period with the bloc which is set to expire by the end of this year. During this 11-month transition period, London and Brussels will be discussing its future economic and legal relationship, but according to both sides, the trade negotiations have been far from successful, signaling the possibility of “No Deal”.

Last week, the UK government confirmed that the Brexit transition period will not be extended beyond the 31 December date.