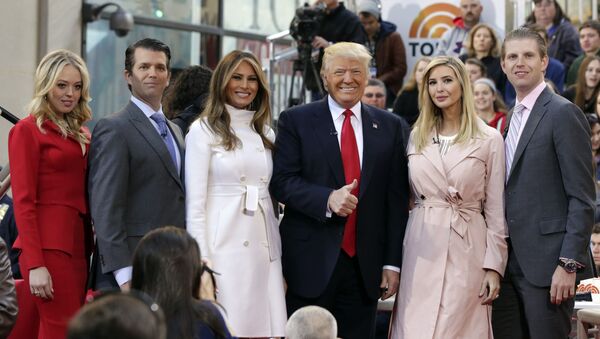 © AP Photo / Richard Drew
Subscribe
In recent years, former assistants and officials who previously worked in the Trump administration have penned exposés in which they harshly criticized the president and his actions. All of these books have caused a stir among the US public. However, so far there has never been a book on Trump written by a member of his family.

The Trump family has gone to court to block the publication of a tell-all book on Donald Trump penned by the president’s niece, Mary Trump, local media reported. Robert Trump, Donald Trump’s youngest brother, filed for a temporary restraining order against Mary Trump in Queens Surrogate's Court. The document says Mary Trump, 55, is violating the nondisclosure agreement related to the settlement of the estate of Fred Trump Senior, the president’s father. Robert Trump said he was "deeply disappointed" with his niece’s decision to write the book.

"Her attempt to sensationalize and mischaracterize our family relationship after all of these years for her own financial gain is both a travesty and injustice to the memory of my late brother, Fred, and our beloved parents. I and the rest of my entire family are so proud of my wonderful brother, the president, and feel that Mary's actions are truly a disgrace", Robert Trump, Donald Trump’s younger brother said in a statement.

According to the website of the book’s publisher Simon & Schuster, the exposé titled "Too Much and Never Enough: How My Family Created the World’s Most Dangerous Man" will describe a "nightmare of traumas, destructive relationships, and a tragic combination of neglect and abuse" and will shine "a bright light on the dark history of their family in order to explain how her uncle became the man who now threatens the world’s health, economic security, and social fabric".

Commenting on the restraining order, Ted Boutros, a lawyer for Mary Trump, claimed the president and his family were trying to suppress a book that discusses matters of utmost importance. "They are pursuing this unlawful prior restraint because they do not want the public to know the truth. The courts will not tolerate this brazen violation of the First Amendment", Ted Boutros said in a statement Tuesday.

The president himself weighed in on the book on Monday, saying his niece was not allowed to write the book because of a "very powerful" nondisclosure agreement that covers "everything".

In her memoir, Mary Trump also alleged that Donald Trump "dismissed and derided" his father when he began suffering from Alzheimer’s disease during the last six years of his life, a claim the president vehemently denied.

As for the release of the book, its publisher Simon & Schuster, which just recently released another exposé on the president penned by former national security adviser John Bolton that the president also tried to prevent, predicted that the court battle would do little to stop the book’s release, which is scheduled for 28 July.

000000
Popular comments
We don't need a book to tell us what kind of human filth DT and his family is. Just listen to the sewer when Donald junior opens the hole on his head.

kernel.panic999
25 June 2020, 00:43 GMT1
000000
kernel.panic999, This is true. yet he remains better than the vile delusional and utterly hypocritical opposition to him. TDS is a real thing and you should get that checked out.