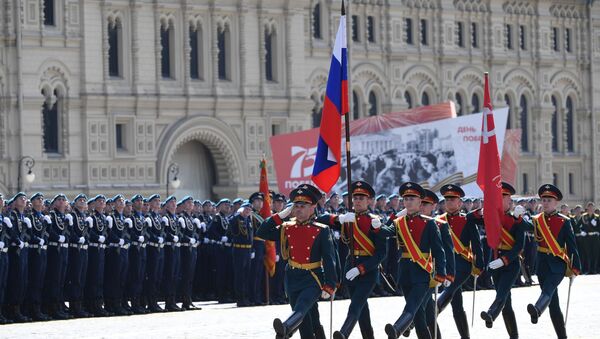 Subscribe
The traditional 9 May event, dedicated to the victory over the Nazis in World War II, was delayed this year due to the pandemic. As a result, President Vladimir Putin set it to coincide with the 75th anniversary of the Victory Parade in 1945, when the soldiers who stormed Berlin and liberated Europe, marched through Moscow.

At the same time, planes and helicopters will participate in an air parade, with Su-25s colouring the sky in white, blue, and red - the colours of the Russian flag.

MOSCOW (Sputnik) - The Spanish embassy in Moscow has congratulated Russia on the 75th anniversary of the Victory in World War II.

"The Spanish embassy in Moscow joins the congratulations to Russia on such a significant day!" the diplomatic mission said on Twitter.

08:36 GMT 24.06.2020
President Putin Thanks Servicemen for Their Participation in the Parade 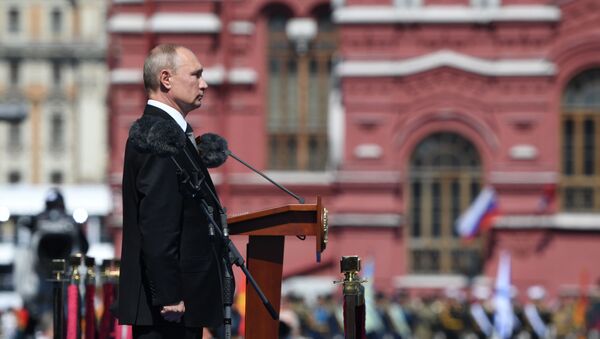 Thousands of Russian servicemen shout "hurrah” during a military parade to mark the 75th anniversary of the Soviet victory over Nazi Germany. Putin congratulated the military and guests, saying this victory determined the future of the planet #RedSquare #Russia #Victory75 pic.twitter.com/QcXfyrZ1GA

MOSCOW (Sputnik) - Venezuelan Foreign Minister Jorge Arreaza said that it was an honor for him to represent Caracas at the military parade marking the 75th anniversary of the Soviet victory over Nazi Germany.

"It is an honor to represent Venezuela and President Nicolas Maduro in Moscow, a few minutes before the start of the parade dedicated to the 75th anniversary of the victory of the Soviet Union over fascism and Nazism in the Great Patriotic War. Glory to the 27 million Soviet citizens who gave their lives", Arreaza said on Twitter. 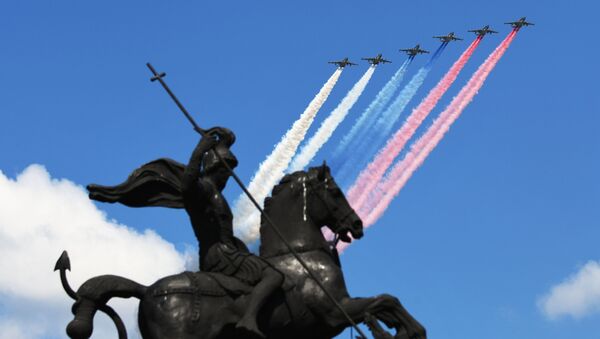 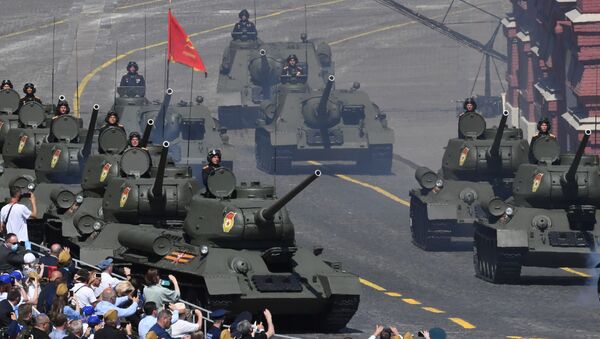 The youngest participants of the parade are entering Red Square, as cadets from the Moscow Suvorov Military School, Nakhimov Navy School, and a unit of the Unarmia (Young Army) military-patriotic movement are marching along Red Square. 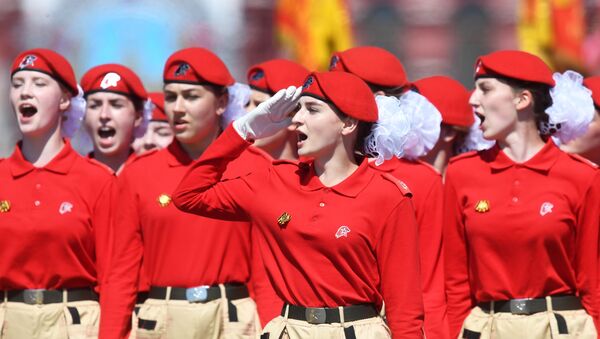 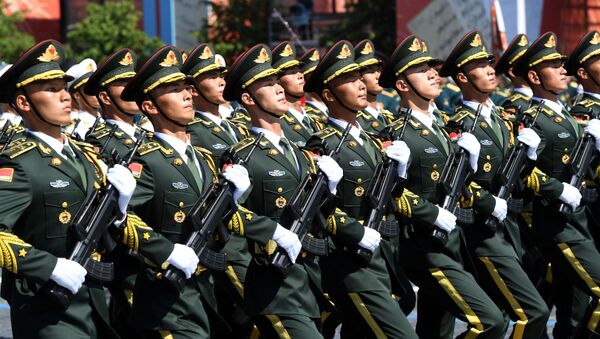 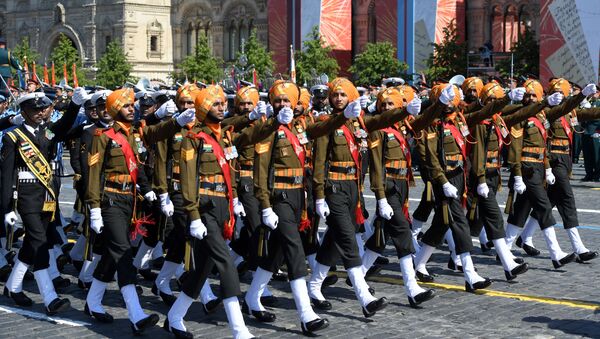 © Sputnik
/
Go to the photo bank
07:26 GMT 24.06.2020
Regiments of the Former Soviet Republics and Other Allies March, Carrying Their Banners 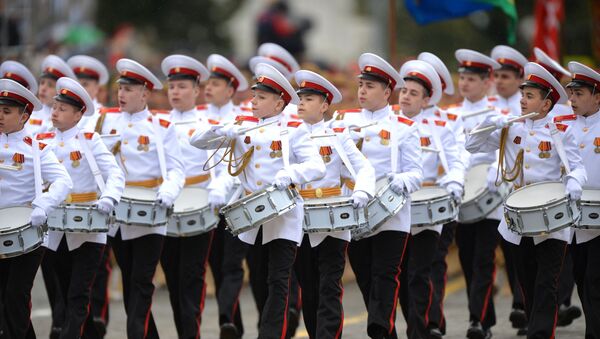 © Sputnik / Pavel Lisitsyn
/
Go to the photo bank
07:18 GMT 24.06.2020
Putin Announces Minute of Silence to Honour Those Who Died During the Great Patriotic War 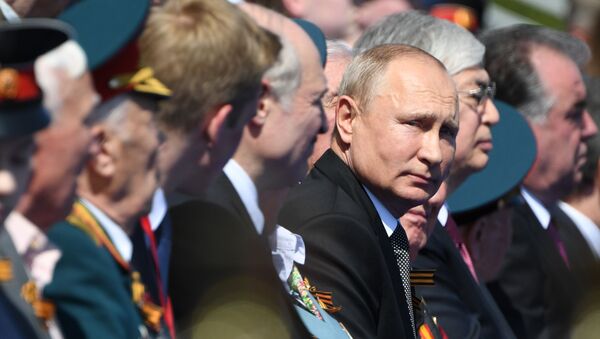 MOSCOW (Sputnik) - Russian President Vladimir Putin said at the Victory Parade on Red Square that only jointly with other states "we can protect the world" from new dangerous threats.

"We will never forget the contribution of our allies to bring victory ... Given the challenges that the planet faces today, we especially acutely feel these greatest values - a man, his dreams, joys, hopes, his peaceful, calm and creative life. We understand how important it is to strengthen friendship, trust between peoples and [Russia is] open for dialogue and cooperation on the most pressing issues of the international agenda. It includes the creation of a common reliable security system, that the rapidly changing combined world needs. Only together we can protect the world from new dangerous viruses", Putin said.

"The Soviet people put an end to the terrible Holocaust, saved the world from fascism; it is impossible to imagine what would happen to the world if it were not for the Red Army", the president said. "The people of the USSR paid a terrible price for the freedom of Europe. Our duty is to remember that the main burden of the struggle against Nazism fell on the Soviet people".

The parade is hosted by Russian Defence Minister Sergei Shoigu, who drove to the square from the Spasskaya Tower gates of the Kremlin in an Aurus convertible. 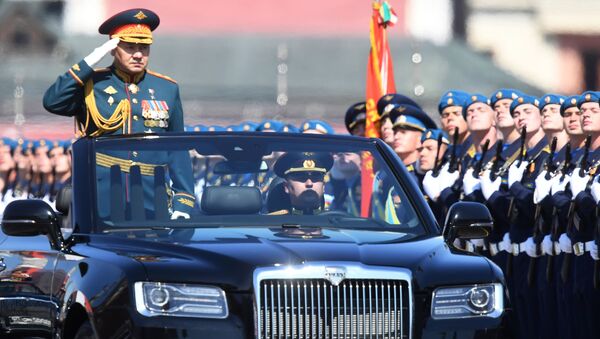 A command is given to bring out the national flag of the Russian Federation and the Victory Banner to the music of “The Sacred War” by Alexander Alexandrov.

The national flag of the Russian Federation and the Victory Banner of the 1941-1945 Great Patriotic War are brought onto the Red Square by the honor guards of the 154th Preobrazhensky Independent Commandant's Regiment. 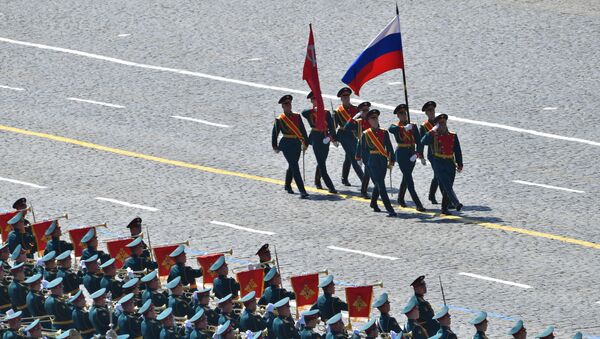 © Sputnik
/
Go to the photo bank
07:00 GMT 24.06.2020
Attention! This is a Live Broadcast From Moscow! Watch and Listen to the Victory Parade From Red Square

Watch V-Day Parade in Red Square as Russia Celebrates 75th Anniversary of WWII Victory
Newsfeed
0
New firstOld first
loader
LIVE
Заголовок открываемого материала
Access to the chat has been blocked for violating the rules . You will be able to participate again through:∞. If you do not agree with the blocking, please use the feedback form
The discussion is closed. You can participate in the discussion within 24 hours after the publication of the article.
To participate in the discussion
log in or register
loader
Chats
Заголовок открываемого материала
Worldwide
InternationalEnglishEnglishMundoEspañolSpanish
Europe
DeutschlandDeutschGermanFranceFrançaisFrenchΕλλάδαΕλληνικάGreekItaliaItalianoItalianČeská republikaČeštinaCzechPolskaPolskiPolishСрбиjаСрпскиSerbianLatvijaLatviešuLatvianLietuvaLietuviųLithuanianMoldovaMoldoveneascăMoldavianБеларусьБеларускiBelarusian
Transcaucasia
ԱրմենիաՀայերենArmenianАҧсныАҧсышәалаAbkhazХуссар ИрыстонИронауОssetianსაქართველოქართულიGeorgianAzərbaycanАzərbaycancaAzerbaijani
Middle East
Sputnik عربيArabicArabicTürkiyeTürkçeTurkishSputnik ایرانPersianPersianSputnik افغانستانDariDari
Central Asia
ҚазақстанҚазақ тіліKazakhКыргызстанКыргызчаKyrgyzOʻzbekistonЎзбекчаUzbekТоҷикистонТоҷикӣTajik
East & Southeast Asia
Việt NamTiếng ViệtVietnamese日本日本語Japanese中国中文Chinese
South America
BrasilPortuguêsPortuguese