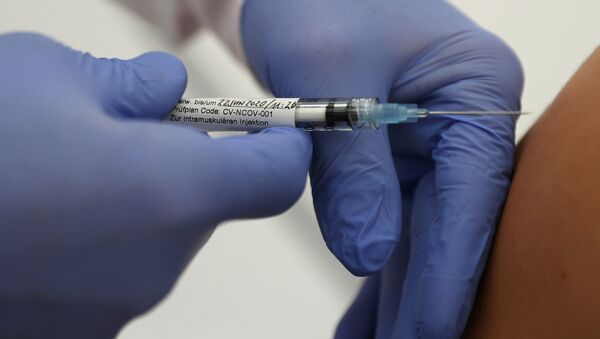 © REUTERS / Kai Pfaffenbach
Subscribe
Research is being carried out all over the world to create a vaccine against coronavirus. CureVac, a Tübingen-based biopharmaceutical company, gave its first test subjects the vaccine on Friday. In an interview with Sputnik, study manager Peter Kremsner spoke in detail about the study.

Each protein in the cell forms according to a coherent plan. This plan is called RNA matrix – mRNA – and is a copy of genes (DNA) in the nucleus of the cell. Coronavirus uses the same mechanism: it carries mRNA into the cell, which contains construction information on all components of the virus.

The mRNA propagates in the cell, incorporates into new virus particles, and eventually, a large amount of the virus leaves the cell to attack new cells.

The mRNA vaccines are based on the knowledge of this mechanism. In the case of a CureVac vaccine, the artificially created mRNA obtains construction information on a specific coronavirus surface protein, a spike protein.

After the vaccine is administered, this protein is produced by affected cells in the body. The immune system recognises the foreign antigen, initiates an immune response and subsequently forms a protection against the actual pathogen. At least that's the theory.

Since Friday, this theory has also been tested on humans in a clinical trial at the University Hospital in Tübingen.

Sputnik talked about how the vaccine was first used in Tübingen, how the research continues, and exactly how CureVac’s vaccine works in an exclusive interview with Professor Peter Kremsner, Director of the Tübingen Institute for Tropical Medicine and Head of the Research.

Sputnik: Mr Kremsner, the first test subject at the University Clinic of Tuebingen received a CureVac’s mRNA vaccine against coronavirus on Friday. How did the first vaccination go? And are the next vaccinations scheduled for today?

Peter Kremsner: The first test person was vaccinated on Friday. It went well. The drug is very well tolerated, there were no side effects or abnormalities, and we will continue to work with the next three subjects who have already been vaccinated and the situation continues to look very good.

Sputnik: Would you tell the audience in brief how this mRNA-based active substance works? How does mRNA get into the target cell? And what antigen is produced in human cells?

Peter Kremsner: The mRNA vaccine is introduced into the cell with lipid particles that surround the mRNA. It is then transduced into the actual antigen. In the end, the structure is always the same – whether it is a DNA vaccine, an mRNA vaccine or a protein vaccine.

All vaccine variants are essentially based on the spike protein that the Chinese scientists described in January when they first described the virus. In some cases, the protein is still slightly processed, but in fact, it is C-protein, which contains all the vaccines.

The form of administration is different. Some do it via vectors (other viruses that are infiltrated by the coronavirus and that have C-proteins on their surface – ed. note Sputnik), but the actual antigen is the same for all of them.

Sputnik: So it is the protein with which the virus binds to the host cell and thus infects it?

Sputnik: It is also said that CureVac requires less RNA compared to other mRNA-based vaccines. What is the reason for this? Is it because the mRNA is replicated in the cell and thereby strengthens itself?

Peter Kremsner: Precisely. At least that is the idea that small amounts might be enough. Whether that will really be the case, remains to be seen. It will be seen in two months. We can't say yet. We can only say that the subjects who have now received the vaccine have no side effects.

For the rest, we have to wait and see whether a few micrograms are enough to achieve good immunogenicity and good protection against the coronavirus.

Sputnik: In contrast to the virus, the mRNA cannot break out of the body cells and attack the next cells?

Peter Kremsner: The mRNA is transcribed in the cell and an antigen is produced, which is the purpose of the protective response of antibodies and T-cells of the immune system. This antigen should also induce protection against infections. There is no further reproduction of mRNA as in viruses.

Sputnik: What has been shown in animal cells that means this drug has now entered the clinical trial phase?

Peter Kremsner: In the preclinical development, stability, teratogenicity – that is how strongly it affects germ cells – and toxicity are always tested on different target cells. And then the toxicity is tested on at least one animal and additionally – but not necessarily – possible effectiveness in the animal experiment.

Here, using a mouse as an example, it was shown that everything is fine. I don't trust in mice experiments, I hope it's the same with humans. We can cure any cancer in the mouse in no time at all and not a single solid tumour in humans.

Against malaria, we have 30 to 40 to 100 percent effective vaccines for mice and not one for humans. In my view, we don’t need to conduct any more experiments on mice, apart from toxicity tests, to test on humans. They are often not very useful and can even be misleading.

Sputnik: And how is the vaccine applied? As a nasal spray or is it injected intravenously?

Peter Kremsner: It is an intramuscular administration.

Sputnik: Let's get back to the actual research. The subject is currently being monitored at the hospital for 24 hours. What happens next? Will she have to report her condition at certain intervals? And how do you prove that she is protected from the pathogen?

Peter Kremsner: She is constantly in contact with us, can report everything at any time, and notes down her condition at home. She measures certain vital parameters and temperature. Then there are ten to twelve follow-up examinations at intervals of first a few days and then weeks, and a month after the first vaccination, there will be a second vaccination.

Sputnik: And how do you prove that a person is immune to the Coronavirus SARS-CoV-2?

Peter Kremsner: During the first phase of clinical trials, the safety and tolerability of medicine are determined and, in addition, immunogenicity, i.e. antibodies are determined and T-cell responsiveness is proved.

During the second phase, the dose is adjusted and possibly other target groups are included as test subjects. Then it is necessary to decide in what direction to move forward, who will receive the new drug, in what dosage, and what should be the method of administration of the drug.

By that time, the first data on its effectiveness will be available. Therefore, the third phase (according to the “gold standard” of research) will be devoted to identifying different amounts of Covid-19 in representatives of “placebo group” and “serogroup”.

If the difference is very large, the vaccine can be 100 per cent effective, and if it is insignificant, it may be less effective. This can only be properly seen in the third phase of the research.

Sputnik: You mentioned other target groups that will join the research later. What group are you working with now? Are they mainly young, healthy people?

Peter Kremsner: The first participants in the research are people aged 18-40, but we have already started working with a group of 40-60 years old. This is the category of test subjects for the first phase: healthy volunteers aged 18-60 years.

Sputnik: And patients with more complex cases, most commonly occurring due to Covid-19, do they take part in the tests when it is already proven that the drug is non-toxic?

Peter Kremsner: When we are sure that tolerance and safety are acceptable, then we move on to the other target groups and then people over 65 years of age and patients with chronic diseases, as well as children, will participate in the research.

After all, everyone must be vaccinated if we are to ultimately achieve collective immunity in order to combat the disease regionally and even globally, and perhaps to eliminate its pathogen.

Sputnik: Further research will now require a much larger number of subjects. You are basically facing a similar situation with the Hydroxychloroquine study when there are not enough people to volunteer because the epidemic is subsiding in Germany. How will the mRNA study continue if the infection rate continues to decrease?

Peter Kremsner: The first phase can be successfully accomplished here. At the moment, the only countries in the EU where efficacy could be tested are Sweden and perhaps Portugal. We cannot start the third phase of the research, during which we can see the effectiveness of the drug if the situation remains at the current level and the number of patients continues to decrease.

That is why it is necessary to think globally and involve many other regions where the epidemic is still widespread. For example, in North and South America, in some Asian countries, primarily the Arab countries, but also in Africa.

Studies in Germany Are Not Enough, Worldwide Research against Coronavirus Is Needed

Sputnik: Assuming the pandemic fades away by itself before the vaccine is produced in mass quantities. Can the first clinical trials with mRNA vaccines be considered a proof-of-concept of human trials? After all, the mRNA vaccines, in general, can be used not only against the SARS-CoV-2, can they not?

Peter Kremsner: Right now, it doesn't look like it's going to go away on its own. On the contrary: new infections are registered almost every day, with global figures increasing day by day. But this impression may be erroneous – the situation may get worse again.

The pandemic continues around the world, and we must not forget it. Even if it were to end right now, it is good that we already have the results of the first and perhaps even the second phase of vaccine research. Then we can see what to do next if the infection comes back.

We have already developed the design and soon the first research will be launched in the USA. Then the first opportunity to test the effectiveness of the vaccine will be available.

Amazon Facility in Germany Linked to Coronavirus Cluster, Reports Say
Sputnik: Does this mean that vaccinated people are specifically infected with SARS-2 coronavirus to test their resistance to infection?

Peter Kremsner: This study will be conducted on small groups of healthy people aged 20-25 who are definitely at risk of infection. Vaccine tests can be conducted in the course of such studies. A description of the procedure can be found on the WHO website, in a report of about 100 pages.

The first studies are to begin soon, as is the case with a great many other infections. We have also developed a model of malaria infection that is used virtually all over the world and this could also work for Covid-19.