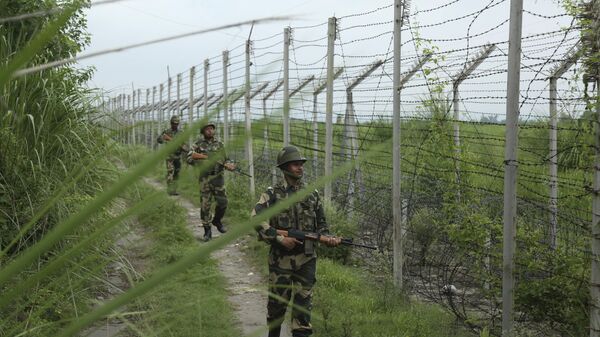 © AP Photo / Channi Anand
Subscribe
International
India
Africa
New Delhi (Sputnik): Indian security forces have stepped up operations to eliminate militants from Kashmir since the region was stripped of its special status in August 2019. According to security forces, they have shot and killed about 35 militants in June alone in the twin districts of Pulwama and Shopian in South Kashmir.

In continuing operations in Kashmir, security forces gunned down two unidentified militants in Bandzoo area of Pulwama on Tuesday. Kashmir police said one soldier belonging to the paramilitary Central Reserve Police Force also lost his life in the encounter, which was still underway at the time of publication.

​Violence in Kashmir is said to have decreased after New Delhi revoked the special status of the erstwhile state of Jammu and Kashmir in August 2019, but the past few months have witnessed a rise in gun battles between militants and security forces as well as infiltration bids across the Line of Control (LoC)– India’s de facto border with Pakistan.

According to Kashmir Police, about 110 militants have been eliminated in operations in Kashmir this year, 80 were killed during the national lockdown alone, which began on 25 March.

The region, which shares a border with Pakistan, has also seen a spurt in cross-border shelling, with over 2,027 incidents recorded as of 10 June, according to security forces.

Islamabad claims to have recorded over 700 Indian ceasefire violations along the Line of Control.

Both India and Pakistan claim Kashmir in full, and administer parts of the region.

Tensions between the two nuclear-capable neighbours escalated dangerously close to a direct military conflict in 2019, when the Indian Air Force bombed a suspected militant camp in Pakistan-administered Kashmir, in retaliation for a deadly February 2019 suicide attack on a convoy of Indian troops in Pulwama district; over forty soldiers died in the incident. Pakistan, for its part, struck back and shot down an Indian fighter jet.

In early August 2019, Islamabad launched a diplomatic offensive against New Delhi, when the latter stripped the Kashmir region of its special status by amending the Constitution of India. Pakistan has broken off all bilateral relations with India since then.