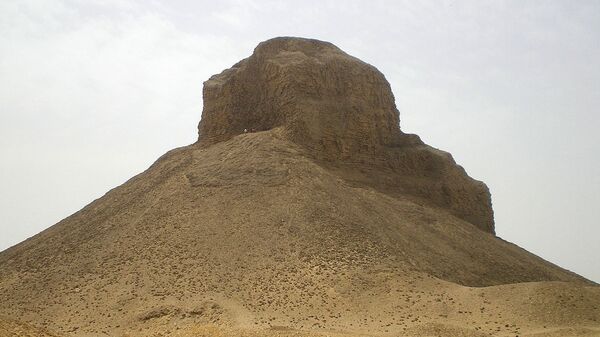 Ilya Tsukanov
All materialsWrite to the author
Describing the way the labyrinth likely looked centuries ago, one researcher claimed that the discovery of the structure was "suppressed".

Archaeologists in Egypt have uncovered ruins which, over a thousand years ago, might have formed “the basis of the complex of buildings with galleries and courtyards” that were described as a labyrinth by legendary ancient Greek historian Herodotus, the Daily Express reports.

As the newspaper notes, the discovery was made in the vicinity of the so called Black Pyramid, some 90 kilometers south of Cairo, with the "foundations" in question first being found by Egyptologist Flinders Petrie back in the 19th century.

And while it was initially theorized that the structure was demolished during the reign of Ptolemy II, in 2008, the Mathana expedition made a surprising find beneath the sands, which led researcher Ben Van Kerkwy to proclaim that "the great lost labyrinth of ancient Egypt had been found” and that “it is a rare thing for ancient historical mysteries to ever be fully resolved".

"This was a gigantic and mythical structure, said by some to have surpassed the achievements of the pyramids, a huge array of thousands of underground halls, temples and chambers, dwarfing all known Egyptian temple sites several times over", Van Kerkwyk said, describing the labyrinth's original appearance. "This structure was visited and witnessed first-hand by the great historians of millennia past, yet ultimately, was lost to the sands of the desert and its physical presence remained unknown for more than 2,000 years."

He also claimed that the discovery was allegedly "suppressed", and that "the incredible potential of this site is being slowly and irrevocably destroyed by both inaction by authorities and by the water table in the area that’s rising".

"Although this expedition was conducted with the full cooperation and permission of the Supreme Council of Antiquities, the official results and conclusion of this legitimate scientific study have never been released", Van Kerkwyk lamented.