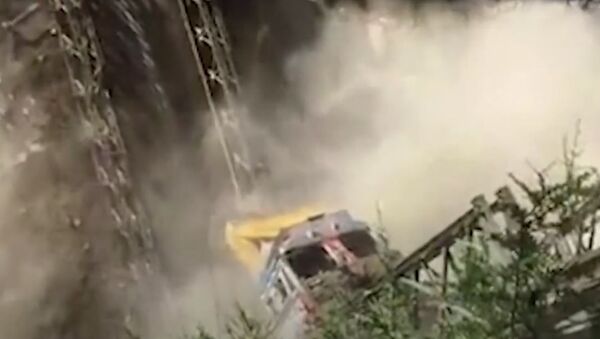 New Delhi (Sputnik): On Monday, a bridge near the India-China border in Uttarakhand’s Pithoragarh district collapsed suddenly as a truck carrying heavy equipment was crossing it. Two persons on the truck, including the driver, sustained serious injuries and were taken to a nearby hospital.

A day after a bridge, located near the India-China border in Uttarakhand, collapsed when a truck was crossing over carrying a heavy load despite a posted warning, Uttrakhand Police on Tuesday booked the driver for damaging the bridge and negligence.

The bridge collapsed on the Dhapa-Milam Road in Milam Johar Valley, around 65 km from the India-China border. The truck was carrying heavy construction equipment which was to be used in the construction of the 65 km motorway from Milam towards China border.

Police officer Mohammed Asif Khan of local Munsiyari police station said, “We have booked the driver of the trailer truck identified as Godhan, under relevant sections of the Indian Penal Code (IPC) following a complaint accusing the driver of crossing the bridge despite warnings.”

Khan further said the driver has not been arrested yet, as he is undergoing treatment while police are yet to record his statement.

Administration authorities said the repair/reconstruction work on the bridge has been started by the Border Roads Organisation (BRO), which is responsible for developing and maintaining road networks in India's border areas.

“It would be repaired in 5-6 days. The bridge was used by the Indo-Tibetan Border Police (ITBP) and defence personnel to reach their posts near the Chinese border. Construction material was also carried through it by the Border Roads Organisation,” the administration officer said.

Since May, the government had vowed to expedite the infrastructure development along the Chinese border area amid stand-offs. India has been constructing 61 roads ranging from Jammu and Kashmir to Uttarakhand and Arunachal Pradesh. Construction work on 17 highways near the Chinese border is being conducted by the BRO.