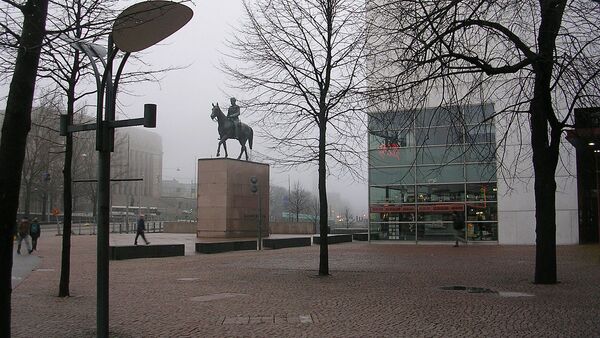 CC BY-SA 4.0 / Jisis / Mannerheim Square in Helsinki, Finland
Subscribe
Despite the controversy surrounding Carl Gustaf Mannerheim's role in the Finnish Civil War, he is seen as the father of modern Finland and has been voted the greatest Finn of all time.

The youth wing of the Left Alliance, currently part of the ruling left-of-the-centre coalition, has called to review the statues adorning the Finnish cities and remove those associated with war and oppression.

This includes the statue of war hero and former president Carl Gustaf Mannerheim, which, according to the Left Youth, should be removed from its vantage point in central Helsinki.

“It is high time for Finland to consider whether our history should be remembered with monuments in the middle of cities glorifying war and oppression. For example, the equestrian statue of Marshal Mannerheim, the Tampere Statue of Liberty and the monuments to racial hygienists like Lauri 'Tahko' Pihkala should be removed from the streets,” the Left Youth said in a statement.

Instead, the youth wing of the Left Alliance party proposed creating a “statue park” on an island off the coast of the capital, which could become a Nordic “cultural destination”.

“We suggest Suomenlinna Island as a place for the new statue park”, Left Alliance youth chair Somali-born Liban Sheikh said in the statement. “It is time to move the worship of atrocities and great men away from the streets. Remembering our past does not require glorifying the ills of history.”

Liban Sheikh earlier expressed his solidarity with the Black Lives Matter movement that swept the Western world following the death of African American former convict George Floyd in police custody. He also called out Finland's “racist past” and urged to combat “Afrophobia and systemic racism.”

The bronze equestrian statue of Mannerheim by Aimo Tukiainen stands in centre of Helsinki, Finland. It was erected in 1960 and is 5.4 metre tall, standing on a 6.3 metre tall granite podium.

So it would appear the statue debate has reached Finland. The Left Alliance's Youth Wing has made a proposal for the moving of the Mannerheim statue in central Helsinki to a specially designed park. The statement continues by stating that statues and memorials 'glorifying war and oppression' should be removed from the streets and put in cultural places with signs telling the history. My personal opinion is this is an attempt to jump on the bandwagon and create an issue where there isn't one. Mannerheim is a controversial character, that cannot and shouldn't be denied, but he was also the only man who could have led the Finns to their independence. The complex issue of Finland's birth is not as simple as the Whites won and Reds died. If we really want history to be told, then it needs to be supported by all, only through proper funding can we see history being taught in a neutral and open fashion. Removing Finland's statues to cultural parks will only see them pushed out of the way. What are your thoughts? #finlandwar #finland #finnishhistory #militaryhistory #puolustusvoimat #worldwartwo #winterwar #winterwar80 #talvisota #Talvisota80 #finnisharmy #mannerheim #history #historiansunion #statue

Baron Carl Gustaf Mannerheim was a Finnish military leader and statesman. After making a career in the Imperial Russian Army, where he rose to the rank of lieutenant general, he served as the military leader of the Whites in the Finnish Civil War, when he helped defeat the nation's communists, and a regent of Finland. During World War II, he became Finland's commander-in-chief of forces and ultimately the nation's president (1944–1946), overseeing peace negotiations with the Soviet Union and the UK.

While not entirely uncontroversial, as many left-leaning Finns have issues with Mannerheim's brutal crackdown on the Reds in the aftermath of the Civil War, Mannerheim is revered throughout Finland. In a survey more than half a century after his death, Mannerheim was voted the greatest Finn of all time and is seen as the father of modern Finland. The Mannerheim Museum in the Finnish capital Helsinki has been called “the closest thing to a Finnish national shrine”.

000000
Popular comments
vargus, Agree with you, but is up to of each government if they allow those terrorists idles, continue of destroying statue, the next one will be Michael Angel, statue because he was white... A bunch of stupids leftist..
maziel fontana
23 June 2020, 23:27 GMT1
000000
vargus, Time to vote out all those leaders from Italy and rest of Europe, corrupts politicians, like it in America, Democrats allowing, and supporting those leftists anarchists destroying, abusing their countries, and doing stupidities because they are more interested in their own well being of the votes, than protecting their land, and people..
maziel fontana
24 June 2020, 03:18 GMT1
000000
Newsfeed
0
New firstOld first
loader
LIVE
Заголовок открываемого материала
Access to the chat has been blocked for violating the rules . You will be able to participate again through:∞. If you do not agree with the blocking, please use the feedback form
The discussion is closed. You can participate in the discussion within 24 hours after the publication of the article.
To participate in the discussion
log in or register
loader
Chats
Заголовок открываемого материала
Worldwide
InternationalEnglishEnglishMundoEspañolSpanish
Europe
DeutschlandDeutschGermanFranceFrançaisFrenchΕλλάδαΕλληνικάGreekItaliaItalianoItalianČeská republikaČeštinaCzechPolskaPolskiPolishСрбиjаСрпскиSerbianLatvijaLatviešuLatvianLietuvaLietuviųLithuanianMoldovaMoldoveneascăMoldavianБеларусьБеларускiBelarusian
Transcaucasia
ԱրմենիաՀայերենArmenianАҧсныАҧсышәалаAbkhazХуссар ИрыстонИронауОssetianსაქართველოქართულიGeorgianAzərbaycanАzərbaycancaAzerbaijani
Middle East
Sputnik عربيArabicArabicTürkiyeTürkçeTurkishSputnik ایرانPersianPersianSputnik افغانستانDariDari
Central Asia
ҚазақстанҚазақ тіліKazakhКыргызстанКыргызчаKyrgyzOʻzbekistonЎзбекчаUzbekТоҷикистонТоҷикӣTajik
East & Southeast Asia
Việt NamTiếng ViệtVietnamese日本日本語Japanese俄罗斯卫星通讯社中文（简体）Chinese (simplified)俄罗斯卫星通讯社中文（繁体）Chinese (traditional)
South America
BrasilPortuguêsPortuguese
NewsfeedBreaking
19:37 GMTThe US Space Force’s Oldest Adversary, Social Media, Roasts Their New Uniforms
19:25 GMTTraffic on Motorway in German Bavaria Halted Due to Armed Hostage-Taking Situation - Reports
19:24 GMTJoe Biden, DHS Chief Upset by 'Horrible' Videos of Border Patrol Dealing With Haitian Migrants
19:24 GMTBiden Believes Footage From US-Mexico Border ‘Horrific’ and Supports Probe
19:15 GMTSoldiers Killed in Galwan Valley Clash With India Now Part of Patriotism Lessons for Kids in China
19:14 GMT‘An Unpredictable Ally’: Does the AUKUS Pact Undermine the Quad's Significance?
19:11 GMTSearch for Fiancé of Gabby Petito, Brian Laundrie, Resumes in Florida Wilderness
18:54 GMTFrench Defenсe Minister Says US Instigating Confrontation With China
18:48 GMTNew ‘Storytelling’ in Skripal, Litvinenko Cases Meant to 'Sabotage' Effort to End Russia-UK Cold War
18:40 GMTTexas Governor Says Biden Has Not Granted Federal Emergency Declaration Over Border Crisis
18:39 GMTWoman Claims US Billionaire Leon Black Raped Her in Jeffrey Epstein’s Townhouse, Media Says
18:29 GMTMigrants Escape After Overtaking Transport Bus
18:08 GMTVolcano Continues to Erupt on Spanish Island of La Palma
17:49 GMT'US Hegemonic System' Has 'Failed Miserably', Iran's Raisi Tells UN
17:24 GMTUSAF Reveals It Has Five New B-21 Strat Bombers in Production, Not Two as Originally Reported
17:07 GMTAncient Pyramid Made From Volcanic Ash Likely Built to 'Calm Earth’s Anger,' Media Says
17:00 GMTDozens Protest Outside UN Headquarters Against US Global Military Engagements
16:43 GMTUS House Democrats Introduce Legislation to Prevent Presidential Abuses
16:35 GMTPalestinians Ready to Renew Talks With Israel If They Show Readiness, Foreign Minister Says
16:31 GMTRussian Embassy in UK Slams Scotland Yard's Approach to Fact-Finding in Skripal Case