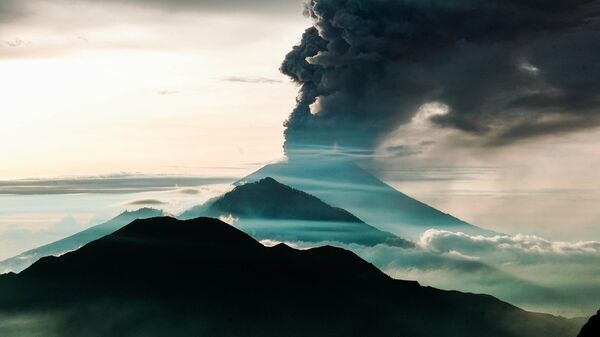 Ilya Tsukanov
All materialsWrite to the author
While the eruption in question did occur around the time of the Roman Republic's demise, it wasn't immediately clear whether it actually helped the emerging Roman Empire to consolidate its hold during that period.

A massive volcanic eruption that occurred during first century BC at Mount Okmok in Alaska might've contributed to "2 years of weird weather and famine" that occurred following the assassination of Julius Caesar, Science Magazine reports.

According to the media outlet, while the darkening of the sky immediately after Caesar's demise in 44 BC was likely caused by a "known, small" eruption of Mount Etna, authors of a new study recently published in the Proceedings of the National Academy of Sciences postulate that Mount Okmok erupted the following year, producing a cloud of "sunlight-blocking particles" which "could rise into the low-lying Arctic stratosphere" and could have spread throughout the Northern Hemisphere.

McConnell also mentioned a possibility that said eruption could've helped the emerging Roman Empire to "consolidate its control", assuming that the eruption did contribute to the "famine and other disruptions" that marked final days of the Roman Republic whose end "happened during these two extreme years of climate".

"It’s a possible coincidence, but it doesn’t seem likely", the researcher remarked.

The media outlet points out, however, that a number of scholars argue that the Roman Republic was ailing years before the eruption in question, with Guy Middleton, an archaeologist at Charles University, stating that “the problems with the republic were political, deep in origin, fought out between members of the elite, not a popular revolution or a subsistence crisis”.