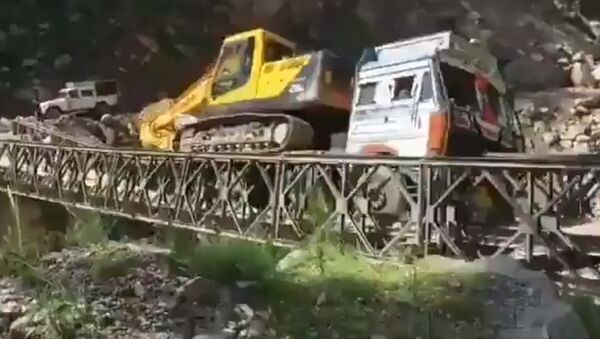 Media reports suggest that the truck was carrying heavy construction equipment that was planned to be used in the construction of 65 km motorway from Milam, India towards China border.

Two people have been injured after a bridge in Uttarakhand, India, near the border with China, suddenly collapsed when a truck loaded with heavy equipment tried to cross it.

"The collapse of the bridge will cause problems to the deployment of forces heading to the China border while will also affect the road construction work,” a senior administration official said.

The video, that has been recently published on social media, shows a truck crossing a bridge with a person walking just behind it. As the truck crosses half way over, the bridge suddenly collapses with the truck falling into the gorge.

The two injured people, including the driver, were in the truck when the bridge collapsed. A person seen on the video going behind the truck at the moment of the incident wasn't injured.