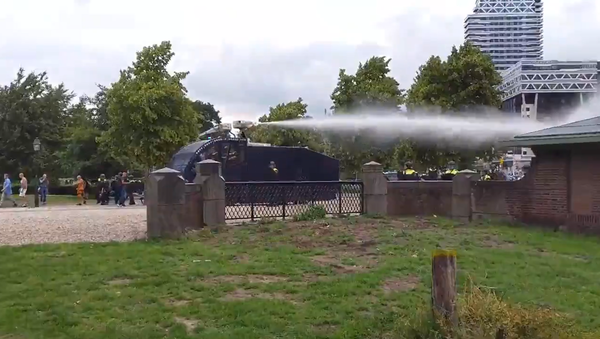 Denis Bolotsky
All materialsWrite to the author
As thousands of people gathered in central Hague on Sunday to voice concerns over the government’s COVID-19 restrictions, agents in riot gear, mounted police units and water cannon were sent to disperse the crowd.

Malieveld is an area known for hosting large festivals, picnics and rallies. On Saturday the venue hosted a Black Lives Matter protest against a new police law. The law, currently being reviewed by the Senate, will give police more rights to use force, including lethal force.

Media reports show that the event ended peacefully, with police agents showing no aggression toward participants. When anti-lockdown activists calling for the lifting of coronavirus-related restrictions in the Netherlands rallied for their cause on the next day, however, the Hague authorities said that a massive event would be a threat to public health, stressing that it violates a ban on public gatherings which is in effect until 1 September.

Thousands of people, among them women, children and the elderly, showed up for the Sunday rally, as police used physical force to disperse the crowd.

This video from the Yellow Vests NL shows police agents pushing an elderly man and hitting their former colleague – an ex-police officer, with a baton. In another video this former policeman is saying “What happened here is unbelievable” https://t.co/MLHqyIez4u

Some media outlets claimed that police agents were provoked by "trouble makers", also described as "football supporters", who threw stones and smoke bombs at officers. Eyewitnesses pointed out that the standoff, which may have triggered the police aggression, happened not at the protest venue itself, but at a nearby railway station.

According to Patrick Savalle – a Dutch blogger who filmed Sunday’s rally and was targeted by a water cannon, for the thousands who peacefully rallied in Malieveld, the tough police actions were unexpected and unprovoked.

Watch the first seconds of this video. Dutch riot police was charging at a crowd that included children and elderly people.

You can be sure this police force will be happy to enforce the Orwellian #COVID19 laws we were protesting. https://t.co/9gXkWIxlUP

“It was excessive force, although they didn’t hurt anybody. But it was massive response, and we weren’t warned, or there was no indication of what we should do” said Savalle, adding, “once they started using the water cannon on normal people, and there were children, and there were women – it’s kind of excessive.”

Once the law enforcement agents started encircling the protesters gathered in the field, many ran in fear, with one video showing a police van speeding into the crowd.

Later the Hague police stated that the maneuver was not dangerous and was observed by agents coordinating the operation with the use of an aerial view.

Around four hundred people – mainly those who refused to leave the field, were arrested, and at least five were detained for throwing objects at police near the railway station.

But despite a tough reaction by authorities, many Dutch people are prepared to stand for the cause and are calling for the abolition of the COVID-19 lockdown.

“In my opinion it’s exaggerated.” said Savalle. “The intensive care units are empty. There are no more new cases. RT-PCR measurements are very unreliable. The economy is collapsing, it’s inhuman to be isolated for three months, it’s not realistic anymore.”

According to data collated by the Johns Hopkins University, as of 22 June, the Netherlands had 49,801 confirmed COVID-19 cases and 6109 coronavirus-related deaths.

The country’s government introduced a set of restrictive measures to slow the spread of the virus in mid-March, introducing social distancing regulations, closing restaurants, cafes, gyms, hair salons, schools and child care centers. Flights from China, Iran, Italy, and South Korea, which had the largest number of COVID-19 cases at the time, were suspended.

In May, Dutch authorities announced that the country would go through a four month gradual lift of the lockdown, with the final date set for 1 September. Until that date all public gatherings, including rallies, are prohibited.

At the time of publication, The Hague police did not reply to Sputnik’s request for comment regarding the use of force against protesters.

000000
Popular comments
And, these kinds of responses to peaceful protests motivate even more protests like BLM. Are the cops and their bosses that stupid that they don't get it?

TruePatriot
22 June 2020, 07:56 GMT3
000000
Sputnik forgets to mention the demonstration was against the new corona law which gives our prime minister dictatorial powers to enforce any kind of lockdown measures as he deems necessary, without approval of the senate. This law makes it legal for police to raid your house and arrest people if they think you invited too many people for your birthday. The organisers estimated 50000 participants in the talks with police and the official registration paper. Then the authorities forbade it over "security concerns because many more than the expected 100 protesters" were showing up. Also the media repeated that lie. Just an excuse to cancel.
joost
22 June 2020, 08:52 GMT2
000000
Newsfeed
0
New firstOld first
loader
LIVE
Заголовок открываемого материала
Access to the chat has been blocked for violating the rules . You will be able to participate again through:∞. If you do not agree with the blocking, please use the feedback form
The discussion is closed. You can participate in the discussion within 24 hours after the publication of the article.
To participate in the discussion
log in or register
loader
Chats
Заголовок открываемого материала
Worldwide
InternationalEnglishEnglishMundoEspañolSpanish
Europe
DeutschlandDeutschGermanFranceFrançaisFrenchΕλλάδαΕλληνικάGreekItaliaItalianoItalianČeská republikaČeštinaCzechPolskaPolskiPolishСрбиjаСрпскиSerbianLatvijaLatviešuLatvianLietuvaLietuviųLithuanianMoldovaMoldoveneascăMoldavianБеларусьБеларускiBelarusian
Transcaucasia
ԱրմենիաՀայերենArmenianАҧсныАҧсышәалаAbkhazХуссар ИрыстонИронауОssetianსაქართველოქართულიGeorgianAzərbaycanАzərbaycancaAzerbaijani
Middle East
Sputnik عربيArabicArabicTürkiyeTürkçeTurkishSputnik ایرانPersianPersianSputnik افغانستانDariDari
Central Asia
ҚазақстанҚазақ тіліKazakhКыргызстанКыргызчаKyrgyzOʻzbekistonЎзбекчаUzbekТоҷикистонТоҷикӣTajik
East & Southeast Asia
Việt NamTiếng ViệtVietnamese日本日本語Japanese俄罗斯卫星通讯社中文（简体）Chinese (simplified)俄罗斯卫星通讯社中文（繁体）Chinese (traditional)
South America
BrasilPortuguêsPortuguese
NewsfeedBreaking
04:30 GMTGimme That: Adorable Golden Retriever Twins are Ready for a Treat
04:16 GMTUS House Armed Services Committee Warns Troubled F-35 Program May Become Unsustainable at Its Peak
04:01 GMTUS Civil Rights Leader Applauds Police Chokehold Ban, Urges Congress to Move on Floyd Act
03:55 GMT'Cut Him Off Now!': Newsmax Host Loses Cool After US Vet Critiques Trump Over Afghan Withdrawal
03:20 GMTUK High Court Rules Will of Prince Philip to Remain Sealed for 90 Years
02:31 GMTUS Coast Guard Joins Australia Navy for 3-Day Exercise in South China Sea
01:56 GMTAlex Murdaugh and The Fall of a Southern Dynasty
01:33 GMT'At the End of the Occupation' Country Faces Many Challenges - Head of Afghan National Peace Council
01:11 GMT'Human-Sized Penguin' Uncovered by New Zealand Schoolchildren Reveals Ancient Species
00:52 GMTTrump Expresses Sympathy for US Capitol Riot Suspects Ahead of September 18 Rally
YesterdayUS Approves $500Mln Military Sale to Saudi Arabia to Support Copter Fleet - Pentagon
YesterdayMinneapolis Police Department Buys ‘Not-Reaching Pouches’ to Reduce Deadly Traffic Stops
YesterdayTexas Governor Says Biden Administration Had Plans to Close Section of US-Mexico Border
YesterdayBotched FBI Probe Into Nassar Abuses Highlights ‘Endemic Failures’ Within Bureau, Former Agent Says
YesterdayTwitter Goes Bonkers After Star Batsman Virat Kohli Quits as Skipper of India's T20I Cricket Team
YesterdayHuman Hair as Pet Food? Indian Scientists Develop Unique Way to Use Keratin Waste
YesterdayBiden Retrieved on New Attack Ad Against Buttigieg Over Fears of Reprisal, Book Claims
YesterdayHow New Book About Trump Misfired, Inflicting Further Damage to Biden's DoD After Afghan Debacle
YesterdayUS Grand Jury Indicts Clinton-Linked Attorney for Making False Statements to the FBI
YesterdaySpecial Counsel Durham Allegedly Seeking to Indict Lawyer at Firm With Ties to 2016 Clinton Campaign