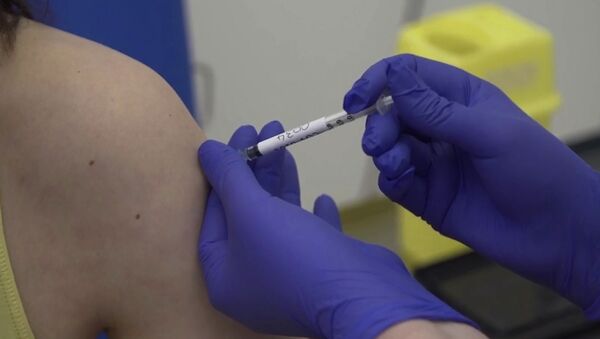 © AP Photo / Oxford University Pool
Subscribe
Official figures in Germany have revealed that the country’s coronavirus R number has leapt again - from 1.79 on Saturday to 2.88 on Sunday. The Robert Koch Institute for public health, which has been publishing the country's COVID-19 statistics, said the new number is based on a four-day average.

These figures come on the back of the UK outlining plans to open more of the country up and out of lockdown despite fears that cases could rise again.

With more on this story, Sputnik spoke to Dr Jeremy Rossman an Honorary Senior Lecturer in Virology and President of Research-Aid Networks at the University of Kent.

Sputnik: We’re seeing countries all across the world phase out lockdown measures and ultimately re-opening society to citizens – particularly here in the UK – despite deaths still occurring daily. Where is the UK in its coronavirus timeline and are we coming out of lockdown so quickly?

Dr Jeremy Rossman: The UK is starting to do quite well in terms of their case numbers. We have had declining UK case numbers, our lockdown has been quite effective at reducing case numbers, but the case numbers are still high compared to many other countries that have come out of lockdown.

So, there is this concern that our case numbers are still a little bit too high and if we ease back into a version of normal life too quickly, without this really good testing and tracing infrastructure, then we do run that risk of a resurgence of cases.

My concern is that we still have a long way to go to have that robust test and trace infrastructure and that if people start going back to normal life without wearing face coverings without paying attention to physical distancing and proper hand hygiene that we will see a resurgence of cases.

Sputnik: Where are we regarding a comprehensive treatment for coronavirus as well as a long term vaccine against the disease?

Dr Jeremy Rossman: We are further along on the side of treatments than we are on vaccines but this makes sense because treatments were repurposing existing drugs, that we know are relatively safe for people to take, whereas the vaccine has to be created from scratch.

On the vaccine side, we have over 30 vaccines in different clinical trials from different countries. They are progressing quite well. We have some that are already approaching stage two or stage three clinic trial.

Now, this is very preliminary data and so we don't have that strong stage three clinical trial data that says, in fact, we have a vaccine that is both safe and effective. This is still going to take many more months.

On the treatment side, we have a little bit more progress. We have a drug called Remdesivir that seems to affect patient recovery and speed up recovery of severe cases and then there's this new drug that was recently reported, Dexamethasone, that seems to reduce the fatality rate of critically ill patients.

This would be incredibly useful and this is from the UK recovery programme but we don't know yet how rigorous this data is. It hasn't been peer-reviewed yet, so this is still very preliminary, but I'm very optimistic that we will have some drugs that can be used, at least for the critical cases, quite soon.

Sputnik: Are we perhaps focusing too much on a second wave and almost missing out the challenges that we've got to overcome right now in the present? And again, just how legitimate are the worries of a second wave in your opinion?

Dr Jeremy Rossman: I think that is absolutely correct. I completely agree with you. I think this is changing the dialogue because if we're talking about a second wave, this is implying that we're either done or we're finishing the first wave and that we're going to have a period of calm until all of a sudden a second wave crashes on us but neither of those is true.

This is not a time of calm and not a time to let our guard down. The second issue here is that we don't know that if there's going to be a resurgence in the fall [autumn].

UK Gov’t Urged to Ensure Capacity to Deal with Second Surge of COVID-19 to Avoid ‘Swamping’ NHS
We don't know how seasonal the virus is we know there's a small effect of changing humidity levels but this is not like the flu, where it's just going to come back every fall.

This is a new virus and a pandemic that's spreading throughout the world regardless of the season and we're also we're not at the mercy of the virus.

Even if it does strengthen in the fall with good testing, tracing, people taking good precautions with face coverings with physical distancing with handwashing, all of that is very effective at combating the disease now in the first wave, if it comes back again, this is a constant struggle, but it's one that we can act on.