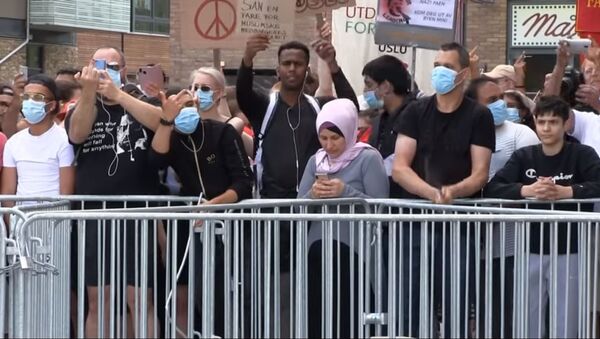 An anti-Muslim demonstration in the first majority-minority district of the Norwegian capital has turned violent, jeopardising the security of the participants and forcing the police to intervene.

A demonstration by the Stop the Islamisation of Norway (SIAN) movement in Oslo was met with a shower of tomatoes, empty bottles and curses as hundreds of counter-protesters gathered to stop it, the newspaper Aftenposten reported.

According to the Oslo police, about 300 people gathered, completely jamming the message of SIAN leader Lars Thorsen with shouting, whistling and drum beats. About 20 police officers with helmets and shields gathered at Mortensrud Square, where steel fences and barricades were set up to separate SIAN members and counter-protesters. In a video, the crowd was captured showing the middle fingers as a sign of disapproval and holding placards reading “Thank God for Muslims”.

However, while the police tweeted that they was present to “protect freedom of expression, and ensure that peace, order and security are maintained”, Thorsen was pelted with tomatoes, eggs and empty bottles.

Ultimately, the atmosphere became so heated that the police had to evacuate Thorsen and his SIAN supporters.

“Objects were thrown that made maintaining the security of the attendants too dangerous”, Oslo police operations manager Tore Solberg told the newspaper Verdens Gang. No people were seriously injured or arrested, the police said.

Previously, several mosques and the Islamic Council of Norway urged their members not to attend the demonstration at Mortensrud Square to avoid “drawing attention to a small group of community haters”.

The anti-Muslim organisation SIAN wrote that it specifically chose Mortensrud in the Søndre Nordstrand district of Oslo, where the immigrant population accounts for 56 percent and the first municipality in Oslo to have a majority-minority population, as a “showcase for importing false culture”.

“In Norway, the law is not the same for everyone. Soon, one can refuse statements on municipal land if it does not belong to the far left or the PC elite. Norway is the new East Germany,” an angry SIAN supporter tweeted.

​By contrast, Trine Dønhaug of the Socialist Left Party described Mortensrud as a “little UN” and stressed that “spreading hatred” must be resisted.

The district committee expressed concern over the risk of infection in connection with the demonstration. Søndre Nordstrand recently had an outbreak of coronavirus. In early June, four out of ten infected people in Oslo came from the district.

The organisation Stop Islamisation of Norway (SIAN) dates back to the early 2000s. It works to counter the proliferation of Islam, which it views as a totalitarian political ideology that violates the Norwegian Constitution as well as democratic and human values. Its repertoire includes demonstrations, awareness-raising campaigns and not least Quran-burnings it sees as a celebration of free speech, not unlike the Danish party Hard Line.

Norway's Muslim community has grown dramatically over the past few decades and is now estimated to constitute 5.7 percent of the country's population of 5.2 million, accounting for well over 10 percent of the people or more in some municipalities.