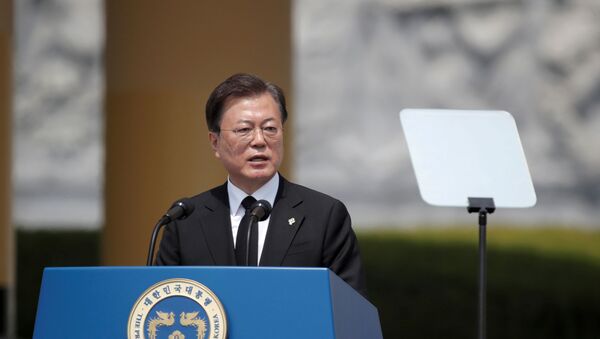 The book 'The Room Where It Happened', written by former Trump national security adviser John Bolton, is set to be released on 23 June, but many media outlets have obtained copies. The book reveals what was behind Trump's foreign policy decisions and has drawn anger from the Trump administration.

Chung Eui-yong, a Blue House national security director, said, cited by Yonhap, that Bolton in his book provided "his own viewpoint", not "accurate facts". He denounced Bolton for "unilaterally disclosing details of diplomatic consultations" that were based on inter-governmental trust, warning that this could "very seriously" affect the sincerity of future negotiations.

Cheong Wa Dae announced that the position was delivered to the US National Security Council on 21 June, expressing hopes that the US would prevent "such a dangerous case" from repeating.

Yoon Do-han, Cheong's senior secretary for public communication, said in a separate statement that Bolton delivered "distorted" information, based on "bias and prejudice".

The response followed John Bolton sharing insights from inside the White House on how Trump made decisions on foreign policy in his memoir "The Room Where It Happened" set to go on sale 23 June.

Bolton's book has drawn deep anger from the Trump administration, resulting in claims that the former trump appointee revealed "highly classified information" in a lawsuit against the ex-national security adviser from the Department of Justice. However, the court allowed the book to be published, despite Trump's attempts to block it.

In an interview to ABC News aired on Sunday, Bolton said that he was confident that "there's no national security information, no classified information" in his book.