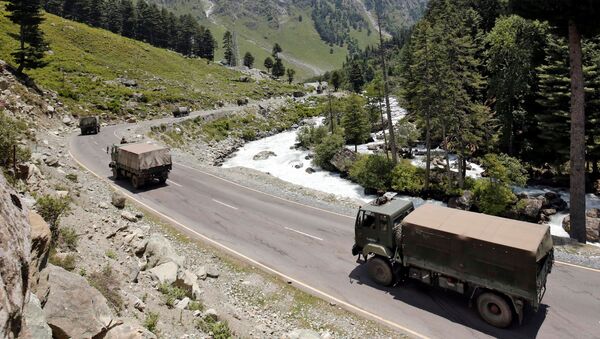 New Delhi (Sputnik): Indian security forces had stepped up anti-militancy operations in Kashmir during the lockdown since 25 March. According to Kashmir police, 31 militants were killed in encounters during the month of June alone in operations in south Kashmir’s twin districts of Shopian and Pulwama.

Three militants were killed in a gun battle with security forces in Srinagar, the capital of Indian Kashmir, on Sunday morning. Police said, during a search operation in the Zadibal area, that the militants had opened fire on the search party. According to Kashmir police, the search operation is still going on and further details have yet to arrive.

​Police had said, during a national coronavirus lockdown which has lasted three months, that 78 militants have been killed by security forces. Violence in Kashmir region had gone done after New Delhi stripped the special status of the erstwhile state of Jammu and Kashmir, but the past few months have witnessed a rise in gun battles between militants and security forces, allegedly as well as infiltration bids across the Line of Control – India’s de facto border with Pakistan.

Kashmir has been a bone of contention between nuclear-armed India and Pakistan since they gained freedom from British colonial rule in 1947. New Delhi blames Islamabad for providing moral and material support to militant groups. Pakistan had officially announced its support for the people of Kashmir, where India had amended Article 370 of the Constitution to change the status of the region.