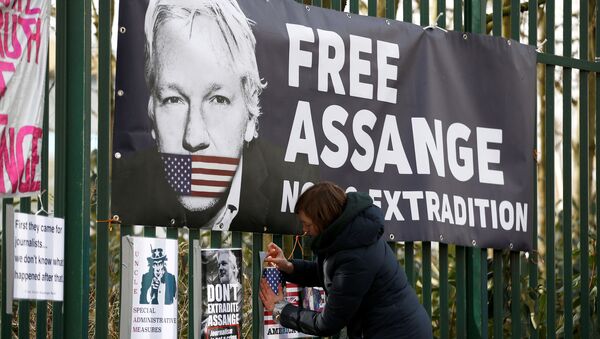 © REUTERS / Henry Nicholls
Subscribe
International
India
Africa
Wikileaks founder Julian Assange remains in a UK prison awaiting extradition to the US on espionage charges. His family continues to demand his release from custody and warns that his prolonged detention is taking a toll on his mental and physical health.

Stella Moris, the fiancee of Julian Assange and mother to two of his children, asked for support from the Australian government on Sunday to help return the Wikileaks founder to his family.

Moris also warned that her partner's health may be deteriorating as he remains incarcerated in the UK's Belmarsh prison.

She called on the Australian Prime Minister to offer his support and said that his children are being "deprived" of their father, who is an Australian citizen, due to his continued stay in prison.

“I’d like to ask Scott Morrison to do everything he can to get Julian back to his family,” Ms Moris told 60 Minutes, adding that she wanted people to understand that they were being "punished as a family."

​“He’s not a criminal. He’s not a dangerous person. He’s a gentle intellectual, a thinker", she added.

The 37-year old fiancee said that Assange was being kept in a small room and was “very depressed”.

​Ms Moris gave birth to two of Assange's children while he was taking refuge in the Ecuadorian embassy in London between 2012  and 2019.

Assange stands accused of publishing scores of secret US diplomatic and military files, many of which indicate alleged war crimes committed by the US military in Iraq and Afghanistan.

The 48-year old journalist is currently battling an attempt to extradite him to the US where he faces 17 charges of violating the US Espionage Act and one count of conspiring to commit computer intrusion. He faces up to 175 years in jail.