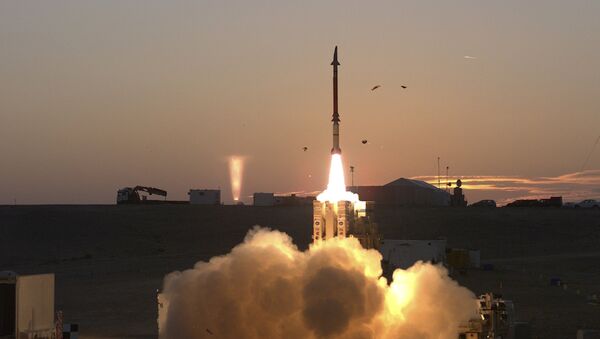 © AP Photo / Ministry of Defense
Subscribe
The Iranian-backed militant group last clashed with Israeli forces in September 2019 following a retaliatory strike in northern Israel. Hezbollah has repeatedly warned that it is ready for a war with Israel but does not seek one.

A video released by the Lebanese militant group appears to show the coordinates of sensitive sites in Israel and the Palestinian territories that could be targeted in the event of an attack.

It features a voice-over provided by Hezbollah leader Hassan Nasrallah, saying that the group is able to bomb “very specific targets in Tel Aviv and also anywhere in the occupied Palestine”.

The 39-second clip ends with shots of missile launchers emerging from beneath the ground. A caption in Hebrew and Arabic reads, “Whatever you do to block the way — it’s over, done and completed”, as translated by The Times of Israel.

Axis of Resistance media touts Hezbollah's ability to precisely bomb targets in #Israel. Nasrallah says: "Today we are not only able to bomb Tel Aviv as a city, but we, God willing, are able to bomb very specific targets in Tel Aviv and also in anywhere in occupied Palestine." pic.twitter.com/ayrUx1Sl0K

Hezbollah (“Party of God” in Arabic) was founded in 1982 as a result of Shia militias consolidating with the goal of driving Israeli forces from southern Lebanon. The group has come to wield greater political influence in Lebanon since Israel’s withdrawal from the country in 2000, and has been a part of the Lebanese government since 2005.

Hezbollah fought a short-lived war with Israel in 2006 that saw thousands of rockets hit Israel’s north, and has remained hostile toward Israel and its alliance with the United States since then.

The Israeli military considers Hezbollah, designated in Israel as a terror group, to be a proxy of Iran (Nasrallah has admitted in the past that the organisation heavily depends on funding from Tehran).

Hezbollah has about 150,000 rockets and missiles with different ranges, according to Israeli military assessments, although the exact number of precision missiles remains unknown. Nasrallah boasted last month that his group has “enough precision-guided missiles in Lebanon for any confrontation, small or big”.

The group’s arsenal is believed to have been either acquired from Iran or produced on Lebanese soil. In August 2019, the Israeli Defence Forces claimed to have exposed three Iranian commanders allegedly working with Hezbollah to manufacture precision-guided missiles. Nasrallah responded at the time that the group does not have facilities to make such missiles and would confirm it openly if it did.

Last September, Israel and Hezbollah saw their worst clashes in years after Hezbollah launched multiple anti-tank rockets at IDF positions along the disputed border area in northern Israel in retaliation for a reported Israeli drone attack in Beirut.

000000
Popular comments
Israel would not dare to attack Lebanon...!

netman
21 June 2020, 08:46 GMT13
000000
" Iran supported" and "militant" what's going on here? I tell you what it is it's the state financedl Israel firsters and fifth columns at Sputnik. That's what's this is. You see., Russia is so democratic that it even finance its enemies from within. Anyway, this is also about the new US (Israeli) sanctions, the Cesar's list. This is a message to the fakes in occupied Palestine, "if you don't stop this we might just have no other alternative but to destroy you and you have no defense for that."...