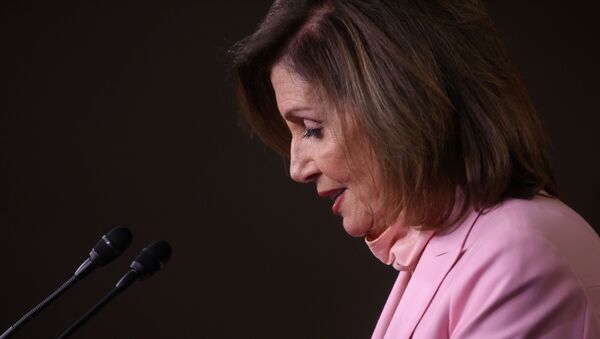 © REUTERS / Jonathan Ernst
Subscribe
Ekaterina Blinova
All materialsWrite to the author
Last Thursday, House Speaker Nancy Pelosi slammed President Trump for being "clearly ethically unfit" and "intellectually unprepared" to be the president of the United States. American observers have discussed how the Dems will play the Bolton book card after using both the COVID crisis and the racism issue against the president.

Pelosi's latest critical remark came amid the fuss over the upcoming release of a potentially scandalous book by John Bolton, Trump's former national security adviser, who was fired by the president last September following "strong disagreements".

The House speaker echoed the former Trump aide who claimed in an interview last week that Trump is not "fit for office", and does not have "the competence to carry out the job", leading to speculation that Pelosi is going to weaponise Bolton's opus in a bid to unseat the incumbent occupant of the Oval Office.

'Nancy Pelosi is Playing Her Role to the Hilt'

"It is highly ironic that Nancy Pelosi talks about being 'intellectually unprepared' in light of the numerous public appearances of the Democratic Nominee, Joe Biden, whose performance frequently makes both his supporters and detractors wonder about his mental preparedness", remarks Vladimir Golstein, associate professor at Brown University in Rhode Island.

"In his almost four years in office, Trump hasn’t done anything that would automatically qualify him as 'unfit and unprepared'".

However, Pelosi is "playing her role to the hilt, and her role is, so to speak, 'to soften the target' if we use the metaphor from warfare", the professor notes, foreseeing that she will go on using  rhetoric, and histrionics, and all sorts of public appearances just to reiterate her point that "Trump is intellectually unprepared to be a president".

There's no doubt that "committed Democrats suffering from the so-called TDS (Trump derangement syndrome)" regard this as an axiom that hardly needs any proof, he adds.

The House speaker has a long record of attacking Trump: in 2017, Pelosi, then House Minority Leader, promoted the idea of Trump-Russia collusion, something which turned out to be hot air as Special Counsel Robert Mueller's probe indicated; then in 2018-2019, she fought with Trump over the border walls; in 2019, she spearheaded an impeachment effort against the president which ended in Trump acquitted by the Senate; then in 2020 the speaker relentlessly lambasted Trump over the global COVID pandemic, American racism and "inadequate" police reform.

"Sadly for many Democrats themselves, the Democratic Party does not have a candidate with a viable and exciting program of addressing numerous ills that have plagued the United States recently", the professor says. "Consequently, their only claim to distinction is the fact that Joe Biden is not Donald Trump. Democrats, therefore, will continue with their politics of accusations: 'Trump this', 'Trump that', in the hope of galvanizing their base and attracting independent voters who might be convinced by Trump’s moral and intellectual failures".

The fact that Nancy Pelosi and the Democrats are citing John Bolton's assessment of Trump says a lot more about them than it does anything about the president, stresses Max Parry, an independent American journalist. According to him, it specifically indicates to what extent "the national security state and the Democratic Party structures have merged together since the 2016 election".

"No matter what one thinks of Trump or whether he is 'ethically fit or intellectually prepared' to be commander-in-chief, is the likes of Bolton really the appropriate standard by which to make such a determination? He is probably one the very last people they should be adducing to evaluate him", Parry notes.

The journalist recollects that Bolton was one of the most ardent advocates of the US war in Iraq, which was launched under false pretences. According to Parry, it is especially telling that the former aide was fretting and fuming over Trump's decision not to authorise military actions against Iran in response to the downing of a US unmanned drone in 2019. "In other words, when Trump wisely chose not to use military force and start an illegal war over a minor incident where no American personnel were killed, which Bolton actually describes as unreasonable", the journalist adds.

"[Bolton] is the last person Democrats should be holding up as some kind of standard bearer, but their derangement syndrome and pathological obsession with [Trump] as a singular figure has caused them to abandon their own supposed values", Parry points out. "Trump cast himself as an anti-establishment outsider and this plays right into his hand with the electorate, but the Democrats are so incompetent and have become so coalesced with the military-security complex they can't see it". 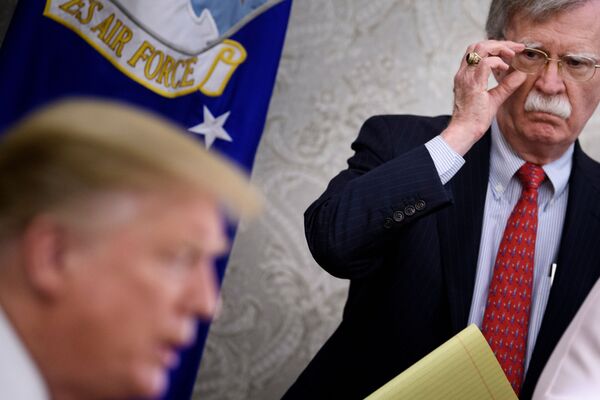 In this file photo taken on May 13, 2019, National Security Advisor John Bolton listens while US President Donald Trump speaks to the press before a meeting with Hungary's Prime Minister Viktor Orban in the Oval Office of the White House in Washington, DC.
© AFP 2021 / Brendan Smialowski

Dems' Non-Stop Blame Game Will Backfire on Them

What one is witnessing now is how different groups across the political spectrum unified by their hatred of Trump are trying to bring him down, the observers note. The timing of the publication of Bolton's book as well as the media fuss around it less than five months before Election Day is hardly a coincidence.

"The Democrats are going to pull out all the stops against Trump", Parry foresees. "Ultimately, however, it is the political establishment and the military security complex (or the 'deep state', whatever you want to call it) that will be able to use all of the other opposition to Trump for their own ends which is about removing Trump from office because they see him as an inadequate steward of empire".

However, Vladimir Golstein believes that this policy of non-stop blaming game against the president will backfire on the Democrats.

"It appears that the latest weapon against Trump is the accusation of racism", the professor says. "The country was clearly disturbed by the chain of violent acts perpetrated by the police against numerous African Americans. So this anger is understood, and any politician with national ambitions has to address it and offer some remedies and solutions. However, true to their recent policies of attacking Trump first, and offering policies after, the Democrats have decided to channel that anger at numerous acts of racism and injustice toward Trump blaming him for conducting rallies in Tulsa, Oklahoma on the day of the notorious race massacre, and so on".

Still, it is clear for everyone, including the president's supporters, that "Trump didn’t invent racism", he adds, predicting that "the more Democrats continue with their anti-Trump rhetoric, the more resistance they’ll produce".

Now that the war is going on for hearts and minds of independents, the Dems' chant that Trump is racist while they are "good guys" supported by the black community does not sound very convincing, according to the academic.

"In my view, Trump should let Democrats go on with their endless and frequently groundless accusations, some of which are so absurd, that they actually nullify the real, constructive criticism that should have been directed against the President. The Democrat’s myopic policies will result in backlash, which most likely will bring another victory for Trump in November", Golstein concludes.

000000
Popular comments
I wonder how fit for office is Ms Pelosi at 80?! They should institute a mandatory retirement age at 75, too many dinosaurs in the US Congress

kfir
21 June 2020, 19:51 GMT7
000000
No American worthy of the name should trust these demon-crates. It is clear that they cannot exist without wars, conflicts, crimes and everything that destroys the human spirit. To go to Afghanistan and Iraq, they destroyed two towers and killed Americans. Bolton was delighted with the bombs that were dropped on the Iraqis. Last year, he dreamed of a strike against Iran that would pave the way for a world war. It would reduce the population, spin the wheel of the economy, establish their new dictatorial order. Everyone who has even a little intelligence is with Trump. Trump says he can't be a president because he doesn't drink human blood like they do, well, they want a criminal or a breast caresser like Biden. Besides, Trump lets them do it, so that they expose themselves more and more. People know it started with their [… F…] Bill Gates and then with [… C…] Jeorge Floyd. It’s the battle between good and evil, everyone has to choose sides.