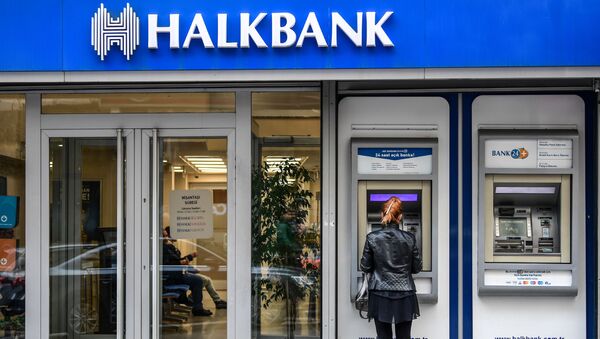 © OZAN KOSE
Subscribe
The former national security advisor, who expressed a willingness to testify in the Democrats’ botched Ukrainegate impeachment trial earlier this year, is getting ready to release a new tell-all book filled with a host of juicy new allegations against the president. Trump has called Bolton a “wacko” and a “liar.”

John Bolton has accused President Donald Trump of trying to intervene in the Southern District of New York’s investigation of Halkbank, a Turkish state-owned bank accused by the Treasury of trying to evade US sanctions against Iran, in late 2018.

“There were any number of conversations between the president and [Recep Tayyip] Erdogan of Turkey on the subject of Halkbank,” Bolton said, speaking to ABC’s Martha Raddatz in an interview set to air Sunday night.

“What Erdogan wanted was basically a settlement that would take the pressure off Halkbank. And let’s be clear, what Halkbank had done was violate US laws respecting sanctions on Iran. If this had been US financial institutions, we would have toasted them, and quite properly so,” the former national security advisor added, suggesting that this wasn’t a case of unfair treatment against a foreign financial institution.

“The president said to Erdogan at one point ‘look those prosecutors in New York are Obama people. Wait till I get my people in, and then we’ll take care of this.’ And I thought to myself, and I’m a department of justice alumnus myself – I’ve never heard any president say anything like that, ever. Ultimately I think Attorney General Barr got the prosecution of Halkbank that they deserved because the Turks wouldn’t agree to anything like a reasonable settlement. So it turned out alright, but that’s how close we got, and I found that disturbing,” Bolton said.

Asked if he felt there was a crime here that could be prosecuted, Bolton said that while he didn’t know all the details, “I’ll tell you, it did feel like obstruction of justice to me…This idea that you give Erdogan and his family, who use Halkbank like a slush fund, in exchange for, what? Some hope down the road of some other kind of treatment for Trump or the country was very troubling to me.”

Trump Says Bolton Has to Pay 'Big Price' as Judge Clears the Way for Scandalous Book Release
Bolton, whose upcoming book is already being considered by Democratic lawmakers as an opportunity for a new probe into Trump’s potential abuse of office following the collapse of Ukrainegate, has mentioned the Halkbank episode several times in recent months, even as Democratic lawmakers were still seeking to probe him over Trump’s alleged illegal attempt to pressure Ukraine into restarting a corruption investigation against the Biden family in exchange for military aid.

Trump has repeatedly attacked the former national security advisor, whom he fired in September 2019 amid numerous disagreements on policy, saying many of the claims made in his upcoming book are false, and that if he had listened to him on foreign policy “we would be in World War Six by now.”

FreedomRain
21 June 2020, 23:36 GMT
000000
Yes of course, it looks like the dance of the cock with the sliced neck. Before it was called The Financial Services Review Group. After the 9/11 attacks, he became: Operations Section Financing of Terrorism. The mission of this section is to: conduct a comprehensive financial analysis on terrorist suspects and their financial support structures both in the US and abroad; coordinate joint participation, liaison, and outreach efforts to leverage private, government, and foreign financial resources; capitalize on the expertise and relationships of the FBI and legal attachés to better prepare financial information emanating from foreign authorities and private agencies, including the deployment of personnel abroad; work jointly with security services to better leverage intelligence to carry out terrorist investigations; work with authorities and regulators, develop forecasting models and conduct data analysis for a proactive approach to identify formerly unknown or "sleep" terrorist suspects; and supplying confidential counter-terrorism investigations with financial data to assist the FBI in its counter-terrorism responsibilities. ---- [Does Bolton believe that his nightmare can become a lucid dream?.] ---- [Logic all this] --- [Last cartridges? ]. [Obamagate] --- [Clintons].