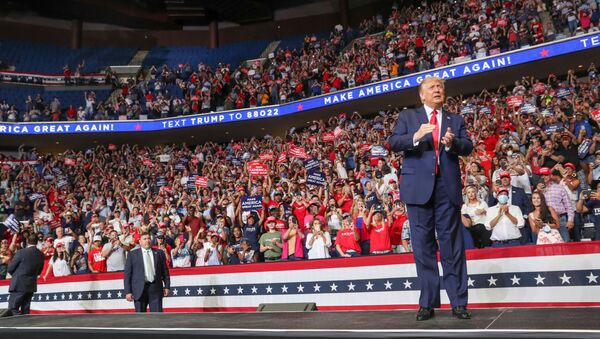 © REUTERS / Leah Millis
Subscribe
International
India
Africa
Donald Trump has used the term “Chinese virus” in the past, a phrase criticised by civil rights groups for inciting violence toward Asian Americans. Trump denied that the term is offensive since the virus did originate in China.

US President Donald Trump has referred to the new coronavirus as the “kung flu” during his first campaign rally in months.

“It has more names than any disease in history. I can name 'kung flu'. I can name 19 different versions of names,” Trump told cheering supporters in Tulsa, Oklahoma on Saturday.

TRUMP: “Covid, it’s this, they’ve got— by the way, it’s a disease, without question, has more names than any disease in history. I can name, Kung Flu, I can name 19 different versions of names. Many call it a virus, which it is, many call it a flu, what difference?" pic.twitter.com/pwKzpL5qic

At the same rally, Trump claimed that he had ordered health officials to “slow the testing down” so that the coronavirus statistics do not appear that grave. The White House said in a follow-up statement that Trump was “clearly speaking in jest to call out the media’s absurd coverage” of the pandemic.

The US is the world’s worst-affected country, with 2.25 million confirmed cases and over 120,000 deaths, and the Trump administration has been criticised for its handling of the outbreak.

Since the onset of the pandemic, Donald Trump has repeatedly used the term “Chinese virus”, drawing accusations from civil rights advocates that such phrasing stokes xenophobia in the country.

“The deliberate use of terms like ‘Chinese virus’ has definitely fanned the flames of racism toward Asian Americans in this country,” John C. Yang, president of the non-profit Asian Americans Advancing Justice, said in March.

Trump denied at the time that his ‘Chinese virus’ remarks were offensive to Asian Americans. “I think they probably would agree with it 100 percent. It comes from China. There’s nothing not to agree with,” he stated.

Meanwhile, there has been a documented rise in anti-Asian American harassment and violence in the United States during the pandemic. According to the website Stop AAPI Hate, there were 1,900 incidents of anti-Asian incidents – including verbal harassment and physical assaults – reported across the US between mid-March and mid-May. Nearly one in four of those incidents are said to have specifically mentioned the terms “China” or “Chinese”.

The US president has consistently accused China for the international spread of the disease and suggested, without providing evidence, that the virus had leaked from a lab in Wuhan, the epicentre of the outbreak. China dismissed the claims and framed Trump’s rhetoric as an attempt to deflect the blame for the high death toll in the United States.