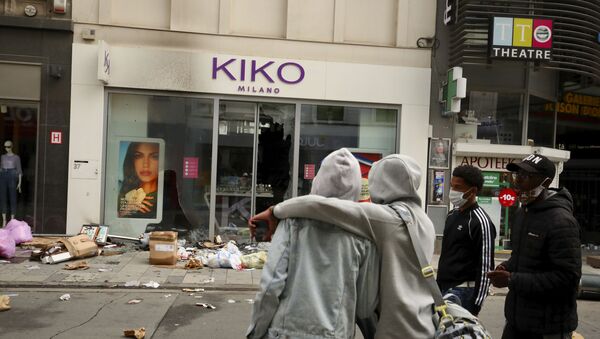 While some social media users criticized the magazine for using such imagery on its cover, there were also those who seemed impressed that they were not afraid to "express their opinion".

Czech magazine Reflex has apparently managed to cause a stir due to the imagery featured on the cover of one of its recent issues.

The cover in question bears the image of infamous WWII Nazi Germany leader Afolf Hitler, albeit with darkened skin, sporting an afro and wearing a golden chain necklace.

The picture was accompanied by a "Black Lives Matter" title-slogan and a caption that inquired whether "we will kneel before all the criminals" who wanted to improve their lot – a likely reference to the ongoing riots and looting that erupted in the United States after the death of George Floyd, with similar protests later rocking Europe as well.

​According to digital media outlet Parlamentní listy, Reflex's editor-in-chief Marek Stonis got banned on Facebook for posting the image there,

"There is no point in explaining it, it would be an insult to the intelligence of the readers", Stonis reportedly remarked regarding the cover and the message it conveyed.

A number of social media users, however, did not seem particularly pleased with the magazine's move, some even speculating that it was just a publicity stunt.

When print media are losing money, they try to be as controversial as possible so that people talk still about them. ("Even bad publicity is good publicity.") SAD!

A Czech Magazine Reflex thought it would be funny to post Hitler in Blackface.

They think it is ok to make linkages between standing up for Black Lives and Nazism.🤬

​There were also those, however, who were impressed by the magazine not being afraid to "express their opinion".

Oh yes, it is awesome. Not because of black Hitler, but because they're not afraid to express their opinion in this stupid world where you can't say just about anything without being lynched by the bearers of the One Holy Truth.