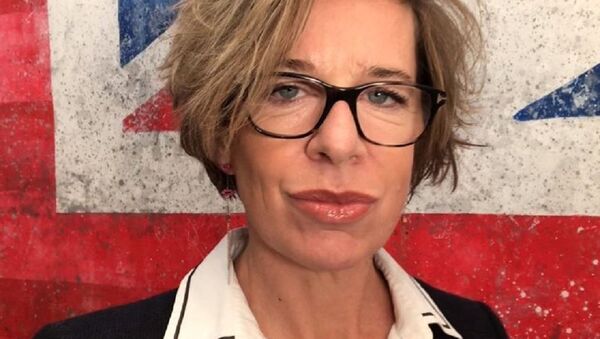 © Photo : katie_hopkins/instagram
Subscribe
International
India
Africa
The British media personality has been critical of the Black Lives Matter movement and footballer Marcus Rashford who forced the government to u-turn on a plan to make school meal vouchers free for children during the summer holidays.

The rightwing commentator Katie Hopkins has had her Twitter account permanently suspended for violating the social media giant’s “hateful conduct” policy, the platform confirmed in a statement.

The move against Hopkins, who has more than 1.1 million followers and been frequently reposted by President Donald Trump, was made to “keep Twitter safe”, according to the platform.

The British journalist and commentator is not new to criticism and controversy as she has of late been calling out the Black Lives Matter movement as well as the UK’s government’s decision to offer free meals to children during school holidays - an initiative driven by the Manchester United footballer Marcus Rashford.

“I often don’t agree with #KatieHopkins, however, I do agree with FREE SPEECH! To ban her from Twitter, a forum for sharing opinions is downright wrong,” one Twitter user remarked.

Some even posted a link to her latest article calling netizens to “keep free speech alive” and praising her for keeping her sense of humour.

And many more echoed the  sentiment, arguing it is not a matter of “like or hate” but that of freedom of self-expression.

What happened to free speech?

I cannot stay on Twitter after they have banned Katie Hopkins. I won’t be told who I can listen to. We must defend free speech even if we don’t agree with what is said. So what is the alternative? Suggestions and advice please.

“Let’s not forget Katie Hopkins,” another posted, with someone replying in the thread that “she's on Parler - not a perfect platform, but at least our free speech doesn't get stifled by Marxist despots with severe white hatred issues,” the user explained.

Quite a few netizens called on others not to ignore the change.org petition aimed at getting Hopkins back online:

Get her back it's free speech https://t.co/RGrNXqDK3n

She will be back on another account. They cannot stop the truth.

There were many reacted to the free speech arguments, both positively and negatively.

“Huge difference between free speech and hate speech. She is still entitled to share her abhorrent views but Twitter is not required to provide the platform,” one said.

But many applauded her suspension, calling her views "far-right:"

Katie Hopkins was the architect of her own demise. Didn't know where the lines of decency were drawn and, despite losing her newspaper column and radio show, still didn't spot the trend and arrogantly pushed on with her hateful agenda. Good riddance. #KTHopkins

All avenues are being closed down to her. Good. We do not need filth like her, spreading hate.

“So the rightwing chatter on this predictably is that this proves Twitter has an anti-conservative bias,” another Twitterian argued.

A third opted to dot all the “i”s requesting Twitter to provide details on what the social media giant perceived as Hopkins’ hate speech, so that the public could make a well informed decision:

Dear Twitter, in the interests of free speech could we please see what Katie Hopkins said so that we can all make up our own minds about whether it was hateful conduct or not? Just so we know what constitutes correct thinking.

Hopkins, who shot to fame after taking part in The Apprentice, show, regularly tweets pro-Trump, pro-Brexit and anti-immigration insights , as well recently launching a series of attacks on the mayor of London, Sadiq Khan. Back in January, she was briefly blocked on the platform for “violating” its anti-hate policy, prompting a debate on free speech breaches.

Hopkins parted ways with the Mail Online, for which she wrote a regular column, in 2017 with the development closely following her losing her LBC radio show, on which she called for a “final solution” in response to the Manchester Arena suicide bombing attack on 22 May 2017.

Twitter appears to have been widely pursuing the campaign of blocking right-wingers from the platform: the founder of the UK’s English Defence League Tommy Robinson has been permanently suspended from Twitter since March 2018, on the same grounds as Katie Hopkins.