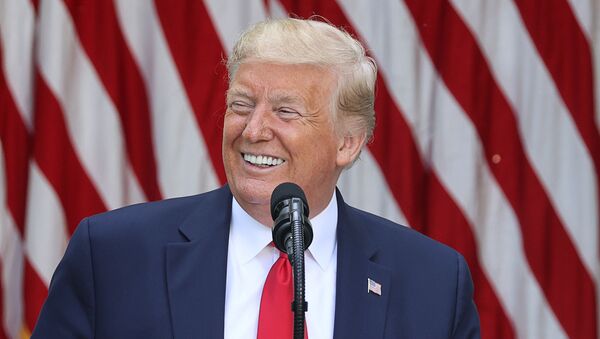 © REUTERS / Jonathan Ernst
Subscribe
Despite the full version awaiting release, the book "The Room Where It Happened", written by the former national security adviser to Trump, John Bolton, has already revealed juicy details on the president's approach to foreign policy decision-making in teasers cited by media outlets.

John Bolton, ex-Trump administration appointee, revealed in his memoir, a piece of which has been obtained by The Guardian, that the US president shared his opinion on world leaders, naming some as "closest to him" and being a lot less sympathetic toward others.

In particular, Bolton wrote that Trump thought everything the French president, Emmanuel Macron, touches "turns to sh*t", while saying that UK Prime Minister Boris Johnson, along with Japanese counterpart Shinzo Abe, are the leaders to whom Trump thinks he is closest.

Trump's former national security adviser noted that he and the president were the rare people in the Oval Office who "cared about Brexit", learning that Trump disliked Theresa May - and the feeling was mutual - for her "freefall" Brexit strategy. Bolton also said that he "tried" to "do far more to help the Brexiteers", as Brexit is "crucially important" to the United States.

Elaborating on Trump-UK opinion, Bolton recalled a "very difficult" discussion over the UK granting Huawei access to development of its 5G networks and Johnson's lack of objection towards the US exiting the 2015 JCPOA nuclear deal with Iran.

Citing Johnson's alleged words, Bolton wrote that the UK PM “stressed that Britain fully understood the existing deal’s weaknesses, which would have surprised many supporters who still worshiped at its altar”.

Bolton's book made a sensation before making it to the bookshelves, revealing insightful details on Trump's decisions on foreign policy, which brought down the president's wrath at his former employee. In an attempt to prevent Bolton from publishing his book, Trump repeatedly and falsely stated that by doing so, Bolton is breaking the law, alleging that the former intended to reveal "highly classified information".

Following the president's warnings, the Department of Justice filed a lawsuit against Bolton and his publisher and requested a restraining order to block the book from release, although legal experts and jurists have stated doubt that the White House moves are anything more than symbolic.

Bolton's representatives shrugged off the moves, remarking that a lawsuit would be an "effort to suppress Ambassador Bolton’s speech" and dismissing it.