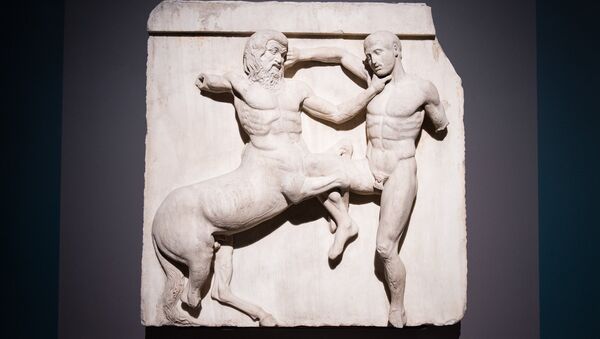 © AFP 2021 / Leon Neal
Subscribe
In the early 19th century, British diplomat Lord Elgin stripped the Parthenon of half of its sculptures and brought them back to England, where they are now kept in the British Museum. The acquisition of the 'Parthenon Marbles' has been a contentious issue between Greece and Britain, and the disagreement continues to this day.

The Greek government has urged the UK to return the Parthenon Marbles to Athens, as the Acropolis Museum marks its 11th anniversary, the Guardian reports.

The Parthenon Marbles are a collection of classical Greek sculptures by architect and sculptor Phidias. They were originally part of the temple of the Parthenon but were removed by British diplomat Lord Elgin in the early 19th century and are now on display in the British Museum in London.

They have never been returned, as Britain has long argued that Elgin was given permission to take them by local Ottoman rulers.

The country’s culture minister, Lina Mendoni, told local newspaper Ta Nea that the Greek government will not relinquish its claim over the stolen sculptures.

“Since September 2003 when construction work for the Acropolis Museum began, Greece has systematically demanded the return of the sculptures on display in the British Museum because they are the product of theft,” she said.

Medoni said that for years the British Museum had argued that Athens had nowhere suitable to display Phidias’ collection. However according to repeated polls, Britons have voiced their support for the return of the artifacts to their home country.

“It is sad that one of the world’s largest and most important museums is still governed by outdated, colonialist views,” she said.

Greece has been campaigning for three decades for the return of the ancient sculptures and, in 2014, UNESCO offered to mediate between the two countries to resolve the dispute. The British Museum declined the offer.

The Greek government has promised to strengthen its campaign to retrieve the artworks ahead of the country’s 200-year independence celebrations next year.

Kyriakos Mitsotakis, Greece’s prime minister, told the Observer that Athens was prepared to exchange other priceless heritage artifacts for the return of the Parthenon Marbles.

Greece has campaigned for the return of the marbles to be part of EU and UK Brexit trade negotiations.

The new Acropolis Museum in Athens has a specifically designed space to house the missing sculptures, as the country awaits their return.

UK Prime Minister Boris Johnson is a renowned classicist and supporter of the marbles remaining in London, stating they were “rescued, quite rightly, by Elgin.”