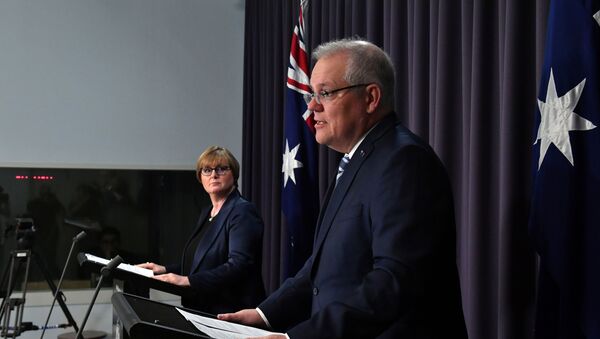 Scott Morrison has stated that an unnamed “sophisticated state-based actor” was behind a large-scale digital attack on Australian government system businesses and service providers.

The two unidentified officials told ABC they believe the malicious cyber campaign was payback for Australia’s 2018 ban on Huawei and other Chinese companies from providing 5G technology for the country’s wireless mobile phone networks.

The ban followed intense lobbying efforts by the United States, which is accusing Huawei of spying on users through backdoors in its equipment, a charge the company vehemently denies. The US has yet to provide evidence to back up its claims.

One of the officials said there was evidence to suggest that the attackers were linked to China’s intelligence agency, the Ministry of State Security (MSS).

However, cyber security analyst Robert Potter said the attacks were “so simple that it frustrates out ability to make complete attribution” to the MSS.

The malicious cyber campaign, which apparently sought to steal users’ details through fake harvesting websites and fishy links, overlapped with a period of deterioration in Australia’s relations with China.

China has warned its tourists against travelling to Australia because of an alleged spike in “racial discrimination and violence” against Chinese and Asian people in the country during the coronavirus pandemic.

Last month, China imposed a crippling import tax on Australian barley, which could cost the Australian economy $340 million. Canberra in response threatened to launch a legal challenge in the World Trade Organisation.

The trade dispute, which stems from a 2018 anti-dumping investigation by China into its domestic barley industry, flared up around the same time Australia pushed for an independent inquiry into the source of the new coronavirus. Scott Morrison at the time said that it wasn’t meant to blame any country, but China hit back against the initiative, calling it a “political manoeuvre”.

Although Scott Morrison stopped short of naming the government or governments suspected of being behind the recent attack, some experts believe it to be China.

Peter Jennings, executive director of the Australian Strategic Policy Institute (ASPI), a think-tank, claimed on Friday that only China had the capability and interest in targeting Australia. “I’m absolutely certain that China is behind it,” he said.

Chinese Foreign Ministry spokesperson Zhao Lijian rejected the accusations as “baseless nonsense”, saying that China has “been opposing and combating all types of cyber attacks.” Lijian also pointed out that the ASPI receives funding from US arms companies (those include Lockheed Martin and Northrop Gruman, according to the think tank’s website).

000000
Popular comments
you lost me soon as you said abc report. i live in australia and ABC station is just like CNN. i would not even believe the weather or date from that station.
darth58
20 June 2020, 10:29 GMT10
000000
This is Australian government stunt to convince their people not to blame Mr. Morrison's decisions to siding America against China. They blame USSR all wrong doing before her broken down and portrait "Communist" for mind blowing. All espionage activities in the world mainly originated from USA, Israel and few European powers. Australia sent their military to broke down Indonesian territory and colonize all resources of the area.
passard
20 June 2020, 11:04 GMT7
000000
Newsfeed
0
New firstOld first
loader
LIVE
Заголовок открываемого материала
Access to the chat has been blocked for violating the rules . You will be able to participate again through:∞. If you do not agree with the blocking, please use the feedback form
The discussion is closed. You can participate in the discussion within 24 hours after the publication of the article.
To participate in the discussion
log in or register
loader
Chats
Заголовок открываемого материала
Worldwide
InternationalEnglishEnglishMundoEspañolSpanish
Europe
DeutschlandDeutschGermanFranceFrançaisFrenchΕλλάδαΕλληνικάGreekItaliaItalianoItalianČeská republikaČeštinaCzechPolskaPolskiPolishСрбиjаСрпскиSerbianLatvijaLatviešuLatvianLietuvaLietuviųLithuanianMoldovaMoldoveneascăMoldavianБеларусьБеларускiBelarusian
Transcaucasia
ԱրմենիաՀայերենArmenianАҧсныАҧсышәалаAbkhazХуссар ИрыстонИронауОssetianსაქართველოქართულიGeorgianAzərbaycanАzərbaycancaAzerbaijani
Middle East
Sputnik عربيArabicArabicTürkiyeTürkçeTurkishSputnik ایرانPersianPersianSputnik افغانستانDariDari
Central Asia
ҚазақстанҚазақ тіліKazakhКыргызстанКыргызчаKyrgyzOʻzbekistonЎзбекчаUzbekТоҷикистонТоҷикӣTajik
East & Southeast Asia
Việt NamTiếng ViệtVietnamese日本日本語Japanese中国中文Chinese
South America
BrasilPortuguêsPortuguese
NewsfeedBreaking
23:03 GMTUS Authorities Getting Veterans Involved in Resettlement on Afghan Refugees - Reports
22:56 GMTBiden’s Popularity Drops More Than That of Any Other US Leader Since End of WWII - Poll
22:22 GMT‘Rust’ Director ‘Gutted’ by Fatal Shooting of Halyna Hutchins on Set
22:20 GMTPotty-Mouthed PM: Broadcaster Blocks Boris Johnson's Remarks on Gay Men, Muslim Women
22:08 GMTHome Run! The Astros Win a Ticket to the World Series Amid Sign-Stealing Scandal
21:29 GMTColombian Authorities Reportedly Capture Elusive Drug Lord Otoniel, Leader of Clan del Golfo
20:50 GMTTwitter CEO Jack Dorsey Issues Cryptic Warning of ‘Hyperinflation’ Soon To Happen in the US
20:17 GMTOne Person Killed, 7 Injured in Shooting Near University Campus in US
20:14 GMTIran Set to Cooperate With Islamic World in Nuclear Development - Spokeperson
19:19 GMTSupermarkets in UK Reportedly Use Cardboard Cut-Outs to Disguise Empty Shelves
19:03 GMT5.0 Magnitude Earthquake Shakes La Palma as Spanish Island Territory Reels From Volcano Eruption
19:01 GMTJeremy Clarkson Slams 'F***ing Government' at Farming Awards Ceremony - Video
18:54 GMTPakistan Denies Reports of Preparing to Sign Airspace Agreement With US
18:16 GMTWatch Massive Migrant Caravan Push North Into Mexico as US Reports Record Apprehensions
18:13 GMTWatch Iranian Governor Getting Slapped on Stage During His Inauguration
18:10 GMTAssange's Extradition Incomprehensible After Revelations CIA Plotted to Kill Him, Fiancée Says
17:42 GMTUnderwater Treasure May Point to Location of Long-Gone 'Island of Gold' Empire
17:01 GMTRansomware Gang Sells Italian Celebrities' Data Stolen in SIAE Breach for $500,000 – Report
16:36 GMTUS Media Dubs Russia’s Okhotnik Drone ‘Beast’ That Could Pose ‘Big Problem for NATO’
16:14 GMTRussia Urges UN Mission to Ensure Security of Staff in Russian Office in Pristina