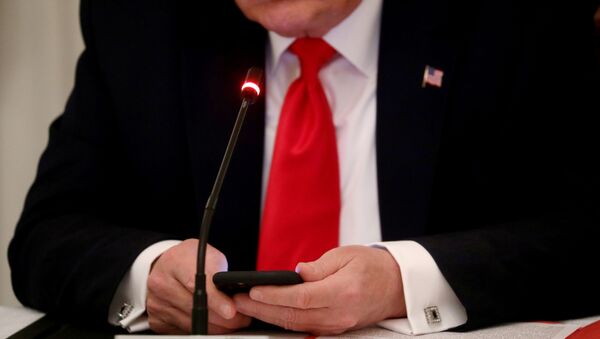 Relations between US President Donald Trump and social media have been tense, as POTUS claims it is "controlled" by the "Radical left", and is retaliated by flagging his posts and limiting promotion for his accounts.

Twitter flagged yet another tweet by Donald Trump as "manipulated media", labeling a post in which Trump shared a fake CNN clip with two toddlers - one black and one white - running on the street, with ominous background music and a CNN-like caption saying “terrified todler[sic] runs from racist baby.”

Then, the video revealed the actual story of two toddlers hugging and having fun, ending with the words "America isn't the problem. Fake news is. If you see something, say something".

This is the third time Trump's tweets have been flagged by Twitter. The first saw the President falsely tweeting about mail-in voting, and then a second tweet on the George Floyd protests, in which Trump used the well-known racist phrase "when the looting starts, the shooting starts".

Trump opposed the flagging, announcing an executive order that could make it easier for people to sue social media platforms.

Earlier, Facebook removed ads for Trump's re-election campaign after they using a red triangle symbol, which was used by the Nazis to denote political prisoners in concentration camps. Trump's campaign defended their ads by suggesting that the red triangle is "an emoji", and also falsely claimed that the symbol is "widely used by Antifa".