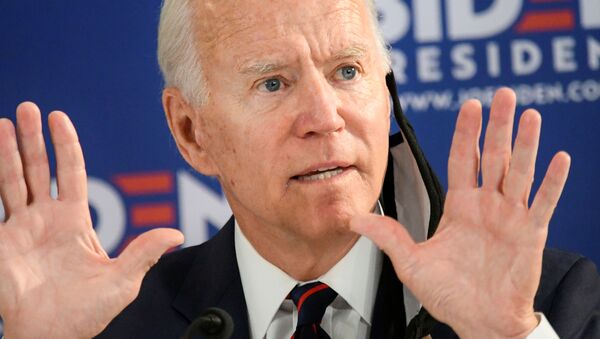 Oleg Burunov
All materialsWrite to the author
Last week, Donald Trump responded to presumptive Democratic presidential hopeful Joe Biden's recent claims about POTUS trying to "steal" the November election by insisting that the former US vice president is unwell.

In an interview with his eldest son broadcast on YouTube Thursday, President Donald Trump, in particular, commented on secretive documents seized from Osama bin Laden's Pakistan compound when he was killed in May 2011.

According to the documents first reported by The Washington Post in 2012, bin Laden planned to assassinate then-President Barack Obama so that the "totally unprepared" Joe Biden would take over as president and plunge the United States "into a crisis”.

When asked about the matter during Donald Trump Jr.'s podcast "Triggered”, POTUS said that “we’re going to immediately make a great commercial out of that if that’s true”.

The remarks come a week after Trump responded to Biden's recent claims about POTUS trying to "steal" the November election, insisting that the former US vice president and current presumptive Democratic presidential candidate is unwell.

“Look, Joe's not all there. Everybody knows. And it's sad when you look at it and you see it, you see it for yourself. He's created his own sanctuary city in the basement or wherever he is and he doesn't come out. And certainly if I don't win, I don't win”, Trump told Fox News.

This followed Biden claiming that his biggest concern was voter fraud on the part of Trump in the upcoming election, and that the military "will escort him from the White House with great dispatch".

"My single greatest concern [is that] this president is going to try to steal this election. This is a guy who said that all mail-in ballots are fraudulent ... while he sits behind the desk in the Oval Office and writes his mail-in ballot to vote in a primary”, Biden said in an interview with Comedy Central's "The Daily Show".

The comments came as a ten-second clip of Biden seemingly losing his train of thought was posted online, with the former VP heard saying, "You know the rapidly rising umm uh in with uh with I don't know".

In March, Trump tweeted that Biden "doesn't know where he is, or what he's doing", adding that he doesn't think the presumptive Democratic presidential hopeful "even knows what office he's running for!"

Donald Trump Jr., for his part, suggested that Biden has Alzheimer's disease or dementia after the former vice president snapped back at a man on the campaign trail telling him, "You're full of sh*t".