Juneteenth: Key Facts About Day Commemorating End of Slavery in US 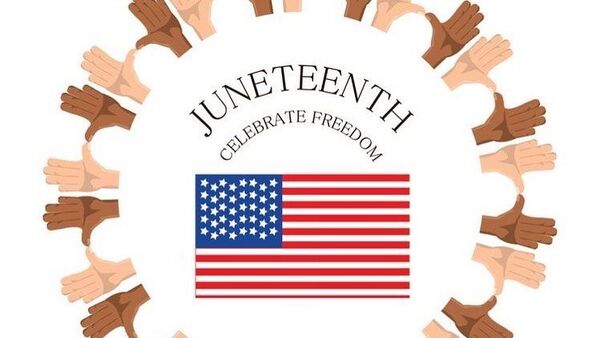 © Blogger photo elennlee/screenshot
Subscribe
The holiday has been celebrated since 1865, but in recent years there has been a spike in interest following the tragic in-custody deaths of African-Americans and protests against racial discrimination and police brutality in the United States.

Thousands of people are expected to take part in this year’s celebrations of Juneteenth, also known as Freedom Day, that commemorates the end of slavery in the United States. Because one of the leitmotifs of the holiday is self-improvement and education, here are a few facts you may want to know about it.

On 9 April 1865, Confederate General-in-Chief Robert E. Lee and his forces surrendered to the Union Army of the Potomac. The surrender effectively ended the country’s Civil War, which began over uncompromising differences on the slavery of black Americans. On 19 June, General Gordon Granger arrived in Galveston, Texas to inform the last remaining enslaved people of their freedom. The announcement was made two years after President Abraham Lincoln issued the Emancipation Proclamation that changed the legal status of the black population. The holiday's name is a combination of two words: June and nineteen.

Despite its important role in the country’s history, it hasn’t been designated as a national holiday. In 1980, Texas became the first state to label Juneteenth a holiday. Since then, 46 states have recognised Juneteenth as a holiday.

How it is celebrated

Although Juneteenth has been celebrated annually since 1865, there is no particular tradition or way to mark the event. It can be a small gathering of family or people living in a neighbourhood over a meal, or it can be large-scale celebrations involving parades, marches, and other entertaining events. In some celebrations, those who either were enslaved in Galveston or are the descendants of those who were make a pilgrimage to the city.

One of the main points of the holiday is education and self-improvement. Thus people are encouraged to learn more about the plight of slaves as well as racial injustice and inequality. Elders are brought in to tell younger generations about events of the past. Prayer services are also an integral part of the celebration.

​The holiday has its own flag, which was designed by activist Ben Haith in 1997 and was revised three years later. It is full of symbols: the star at the centre on the flag represents the state of Texas, nicknamed "the lone star", where General Gordon Granger informed the African-American salves that they had been set free. An exaggerated 13-pointed star represents nova, an astronomical term for when a new star appears. It represents a new chapter for African-Americans.

The arc that extends across the flag represents the new opportunities that lie ahead for black Americans, while the red, white, and blue colours represent the American flag and remind people that those who were freed, along with their descendants, were and are Americans.

What to expect from today’s celebrations?

In recent years, there has been an increased interest in the holiday due to several extremely high profile cases involving the deaths of unarmed African-Americans at the hands of police. In May, a wave of massive protests against police brutality and racial discrimination swept more than 70 cities across the US. They were sparked by the death of African-American man George Floyd, who died after an officer knelt on his neck during his arrest over the alleged use of a forged $20 banknote. Floyd’s death has reignited longstanding anger over the mistreatment of African-Americans and others in the United States. In June, the protests spilled over to other countries, with huge rallies held in Europe, Latin America, and the Middle East.

Demonstrations and protests against racial inequality are expected to be held this year. It is unclear how massive the celebrations will be amid the coronavirus pandemic and fears that the United States, which has the largest number of cases and the greatest death toll from the disease, is now experiencing a second wave of the disease. The Juneteenth flag will be flown and then raised over the State Capitol building in Wisconsin for the first time in the history of the state.

000000
Popular comments
There is a stoic silence from all media, about the Jewish prime role in organizing the trans Atlantic slave trade. By way of obfuscation, Jewish run Hollywood made a film about this featuring crew with crosses around their necks in an effort to falsely depict the slave organizers as being Christian. This Jewish run enterprise was so intensive, they built 2 x synagogues on the hill on the U$ east coast at the slave delivery landing point, to cater for the Jewish slave delivery fraternity.
astrodetective
19 June 2020, 23:50 GMT2
000000
US slavery goes on for black and latin people. Only stop with states independance.