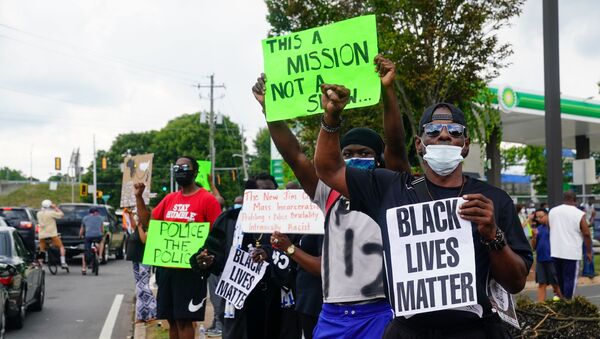 MOSCOW (Sputnik) - Workers using a construction crane have removed a Confederate monument in Decatur, a suburb of the US city of Atlanta after a local court decided to relocate the monument in light of the ongoing anti-racism protests, media reported on Friday.

According to CNN, on Thursday evening, workers, surrounded by a large excited and applauding crowd, pulled down a monument erected in 1908 by the United Daughters of the Confederacy, which is engaged, inter alia, in perpetuating the memory of the soldiers of the Confederate States Army.

Crowd cheers in Decatur as workers remove the Confederate memorial, which a judge declared a public nuisance. ⁦⁦@ajc⁩ pic.twitter.com/udoi1GDAsB

​Last week, a Dekalb County judge ordered that the 30-foot monument at Decatur Square be relocated after municipal authorities argued it had become a threat to public safety during the recent protests.

The killing of African American man George Floyd at the hands of Minneapolis police in late May sparked a wave of protests against police brutality and racism that have spread to all 50 states and numerous countries worldwide.

As part of the protests, several monuments dedicated to controversial historical figures who took part in the American Civil War were removed either by the decision of local authorities or by the protesters themselves.