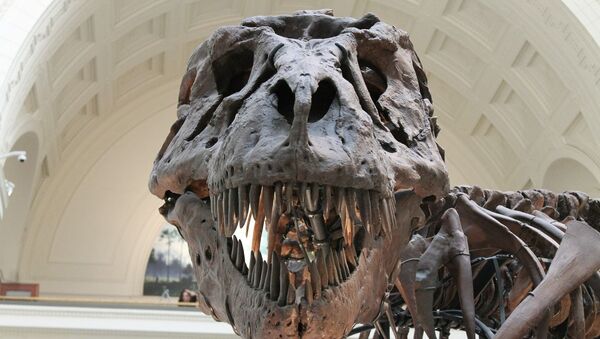 What makes the finding even more exciting is the fact that the footprint itself was discovered by coal miners in the middle of the 20th century. It was even reported in the news. However, for some reason scientists didn’t study it and it spent decades in museum drawers.

An Australian palaeontologist from Queensland University has discovered a footprint of a large, previously unknown, dinosaur. According to a study, which was published on 12 June in the journal Historical Biology, the footprint is 80 centimetres in length (31 inches). "This is the largest footprint that we have of a meat-eating dinosaur", said Dr Anthony Romilio. "We have seen the Tyrannosaurus Rex in North America, and large predatory dinosaurs in Africa and South America. Turns out ours was in Oakey, and it was a bada** dinosaur!"

Some of the world's largest carnivorous dinosaurs once roamed the swamp forests of SE Queensland, near Rosewood and Oakey. Read all about it in our new paper on the theropod tracks of the 165–151 myo Walloon Coal Measures, with @a_romilio + Andréas Jannel https://t.co/NHu53eIdJi pic.twitter.com/boiVeC0cuW

​According to Dr Romilio, the humongous creature, which hasn’t been named yet, roamed Queensland about 150 million years ago. It had legs about three metres long and a body that was up to 10 metres long, which the palaeontologist says makes it one of the largest predatory dinosaurs in the world. "It's almost equivalent to the T-Rex. If you were to put a saddle on its back you would be about 3.5 metres off the ground", Romilio said.

According to the research, the predator was not only gigantic, but also had impressive sprinting skills, reaching a speed of up to 35 km/h (the average speed of a human is 13.5km/h). Dr Romilio hopes that further research will help discover the creature’s skeleton.